Remedy's 'Quantum Break' could meld TV and gaming, but it's got a long ways to go

Remedy's 'Quantum Break' could meld TV and gaming, but it's got a long ways to go

The 'Max Payne' studio's take on sci-fi could be a unique cross-media story, a cutscene-filled mess, or both

Most AAA games try to be like movies to some extent, but Finnish studio Remedy has done it better than most. Max Payne was a masterful John Woo-styled noir title, and Alan Wake drew from the tradition of Stephen King horror, each incorporating fragments of novels, comic books, TV shows, or radio dramas. Now, the team is taking on science fiction with Quantum Break, an ambitious cross-media project. As the first details are revealed, the game promises a lot — but every answer raises a new question.

The first hints of Quantum Break were enigmatic and intriguing: a live-action TV series and a high-production video game that would somehow influence each other. In essence, that's exactly what Remedy is trying to do. Quantum Break will come bundled with a corresponding "season" of television. As you watch the show, you'll find clues and information that will help you play the game. As you play the game, the choices you make will create a personalized "director's cut" of the show, and so on. It’s not a completely new idea: Defiance, another TV series, tied certain plot points to a corresponding game, but everyone ended up seeing the same show. That apparently won’t be the case in Quantum Break.

At this point, of course, we don't know exactly how any of this will work. Remedy writer Sam Lake hinted to us that episodes would need to be unlocked as you progress through the game, but he wouldn't rule out the possibility of watching them out of order or otherwise breaking the sequence — something that could elevate the TV show from a series of full-motion cutscenes or a choose-your-own-adventure story to a genuinely unique element of interactive storytelling.

The problem is that turning a fascinating concept into a playable game is incredibly difficult. The demo we saw from Microsoft and Remedy included a little gameplay, but it was the kind expressly created for E3: heavy on cinematics, light on mechanics. What we did see was gorgeous, with rich textures and a palette that completely nailed the sci-fi action movie look it was going for.

At times, the TV show looked less real than the perfectly-produced game with its idealized characters

Characters were still in the uncanny valley, but at times they came close to escaping it even with live-action counterparts for comparison. Oddly, the relatively low production value of the TV show sometimes made it seem less real than the perfectly lit and scripted game with its idealized character models. Lake describes one of the biggest graphical challenges as imitating real actors’ flaws in virtual characters, but the funny thing is that big-budget movies have gotten slick enough that we no longer expect flaws.

Remedy's focus on creating a cinematic, choice-focused game echoes David Cage's Beyond: Two Souls, which has also been in heavy rotation at E3. Unlike the tiny decisions Cage works from, though, Quantum Break’s choices are based on "memorable moments with big consequences," which Lake refers to as junctions in time. Like Beyond, you'll play as multiple characters, but they’re not as deeply connected — nor even on the same side. Most of the game will be spent as one of the two protagonists, but some sequences will ask you to make decisions as the villain.

Moving between characters lets Quantum Break create multiple perspectives and storylines. But it also heightens possible tension between the game’s story and its gameplay. When you’re playing a villain, couldn’t you just game the choices to help your heroes instead of making decisions from his point of view? Lake promises us you’ll still be immersed in the fiction, but he also says each choice will have gameplay repercussions by creating particular kinds of situations with costs and benefits: "There is a strategy there." 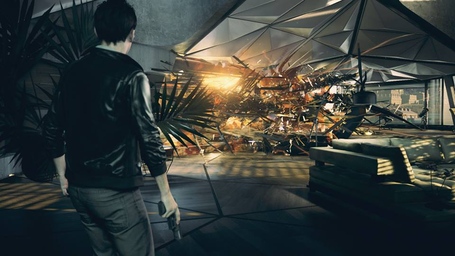 The gameplay remains a cipher. Nominally, it's a big-budget third-person shooter with "time powers," apparently including the ability to stop time (used to rescue a character from a helicopter) and see possible futures based on your decisions. There are hints of things like bullet time or precognition, but it's not clear even Remedy knows for sure what abilities various characters will have. The game’s release date isn’t certain, though it’s likely to launch sometime in 2014.

By the same token, the live-action clips or dialogue are probably a far cry from finished, but the little I saw was rough. The Remedy team works inside genres, and Quantum Break is near-present-day sci-fi — think elements of Fringe and Source Code. It's a potentially great setting, but it's also not as rich with visible tropes as either noir or horror. That means the demo feels less like a pastiche and more like an imitation, without the slightly self-aware distance previous games maintained from their source material.

Despite some misgivings, I’m excited for Quantum Break. That’s partly because it’s a creative risk being showed off among the many safe bets of E3, one of the few next-gen games that really promises me something new — even if it’ll be hard to deliver. But it’s also because the various pieces of the game (the game-and-show combination, the opposing playable characters) are easy to fantasize about. Quantum Break’s multimedia story may end up prosaic, but it’s fun to imagine the kinds of things Remedy could do with it.