Playing 'Battlefield 4': no, you can't blow everything up

Playing 'Battlefield 4': no, you can't blow everything up

"Absolutely nothing compares to the sheer scale and scope of Battlefield 4," touts the game's official website. "Your actions physically change the battlefield in real-time, providing interactive game environments that react to your every move." If only that were the case.

At E3 2013, Electronic Arts made me a believer, with a stunning gameplay demo that had 64 players duking it out over downtown Shanghai at 60 frames per second. The soldiers moved as a cohesive unit, by land, air, and sea, blasting their way through foes, barricades, and buildings alike with rifles, boats, helicopters, and tanks. With little cover out in the open, a squad made its way through an underground mall, and took down a support pillar to send part of the building — and an enemy tank — crashing down. It looked as compelling as a single-player story experience, but with real people making it happen.

Then, jumping into a waiting patrol boat — and from boat to jet ski — they carved a path through the waterfront to a giant skyscraper, dodging helicopter fire all the while. An elevator ride to the top of the building, and our heroes were battling their way across the top of a skyscraper... and then more frantically as the skyscraper, bombarded by enemy artillery, started falling apart.

They leapt off the edge of the building, dramatically parachuting through the scenic Shanghai sky just in time to watch the skyscraper crumble to the ground. The message seemed clear: Battlefield 4 will be a nonstop, action-packed multiplayer experience where there are pathways above, below, and through, and where you can carve your way through the terrain itself to achieve your objective. 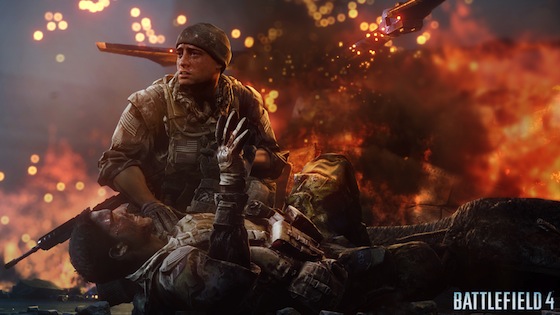 Unfortunately, it's a facade. I got to play the very same "Siege of Shanghai" map as one of those 64 players at E3 2013, and my experience wasn't nearly as fun. Where it seemed like perhaps there'd be paths through every building, only a few actually have interiors. While the main skyscraper certainly has an elevator, my soldier couldn't get up to the top of even the building where my team's helicopter was stationed. The building had no doors. Downtown, I found an entrance to another building entrance and dashed inside, hoping for a moment's respite, only to find that the interior was completely bare, just a set of walls. Rather than move as a cohesive unit, my team ran and gunned willy-nilly around the map. When I jumped into that patrol boat, my driver decided to take us clear out of the arena, sending us to our doom. And though you can destroy that support column and blow up that skyscraper, they're set pieces at best. I spent five solid minutes in a Abrams tank, shelling everything in sight, and only managed to break glass.

In other words, Battlefield 4 multiplayer is much like the multiplayer in every Battlefield before it, only prettier and with a few neat set pieces to battle around. Don't get me wrong, the game could be fantastic with the right teammates in tow. But once the novelty of destroying a skyscraper wears off, it's still up to the players to pull the zany stunts that make a Battlefield experience worth remembering.

Update: Battlefield 4 executive producer Patrick Bach spoke with me at length after this story was published, and while he didn't change my mind about the game overpromising and underdelivering, he had an intriguing explanation: making everything destructible simply wouldn't make for good gameplay. "Having complete destructibility everywhere is not a technical limitation, it's a design decision," he said. "If you could go into every room of every building in this game, you'd completely ruin the experience... You'd need 1,000 players in order to fill them with something."

"We're focusing destruction on where it makes sense"

"We're focusing destruction on where it makes sense and doesn't [negatively] affect the actual game," he added. After I asked for some examples of that, he took me over to the same Battlefield 4 demo station and showed me lots of interactive objects I'd missed. His tank drove over cars and smashed through walls in select game areas, while tank shells took down trees, turned statues into rubble, and knocked panels off ceilings. A number of the things I didn't see at least take visual damage, he said, are probably because the game is still early in development.

And yet, Bach readily admitted that there were loads of similar indestructible objects by design. He pointed at the planter beneath one such destructible tree. "Is it good to remove them," he asked, "or does it actually make good prone cover? We have this matrix of stuff that you might want to break, and we have some things outside the matrix so [level] designers know they can use them." Besides, breakables aren't Battlefield 4's only dynamic asset in multiplayer. Bach also pointed out advertising displays in the subway that light up when a player strays near, alerting others to their presence.

Bach admitted that a lot can go wrong from the design phase to the marketing pahse, but that it's not new for games to tout "freedom" when only actually offering a limited amount. "Grand Theft Auto says it's about freedom... it's not freedom, but it feels free," he said, arguing that in fact it's the limitations that make games fun. "That's what drama is all about: you create a set playground for the player, and then you release them." I don't agree that this particular set of limitations in Battlefield 4 makes sense, that some walls should be breakable but not others. But I understand that the development team had to focus its efforts. Bach pointed at another wall. "Breaking these walls would lead into the actual subway system, which we haven't built," he says. You have to draw the line somewhere.