Sony sacrifices a peripheral for price, cedes motion gaming to the Kinect

Share All sharing options for: Motion gaming forfeit: PlayStation Camera isn't bundled with the PS4, and that's a big problem

"Do you have any 'PlayStation Eye' games upstairs?"

"I think there's a tech demo."

It's not entirely her fault the PR rep doesn't know what I'm talking about. It is a little loud on the show floor, I have a tendency to mumble, and at some point Sony actually officially renamed the PlayStation 4 Eye simply "PlayStation Camera". I guess it's hard for me to know what Sony calls something officially if they won't talk about it officially. As much as Sony wanted to claim the new PlayStation Camera was relevant and capable during the initial PS4 announce event, there was no mention of the device on Monday at Sony's E3 press conference, and it's still scarce on the E3 show floor, even in Sony's own booth.

I pointed this out to Sony North America's game studio lead Scott Rohde, and he didn't seem too concerned. "It just wasn't our focus at this event," he told me. "Our focus was about how big and great the PS4 is, and everything it can do, and the price."

And then, without even taking a breath, he asked: "What was that price again?"

And that's really the whole point. Sony set the $399 pricepoint goal for the PS4 from day one, and the Camera obviously wasn't going to fit within that budget.

"We wanted to make sure everyone could purchase a PS4 for $399," Scott explained. And, he points out, even if someone goes out and buys the $59 Camera peripheral, they'll still be in under the Xbox One's $499 pricetag. "It's not something we're going to cram down people's throats," is all.

It just wasn't our focus at this event

Microsoft, meanwhile, is taking the cram-down-the-throat approach. Not only is it shipping a Kinect with every console, the device actually has to be plugged into the Xbox One for the console to work.

Microsoft's Marc Whitten told us they did this purposefully so developers have a consistent "palette" for creating experiences, "whether it's touch... whether it's Kinect... or whether it's a gamepad, and more importantly, how those all play together." Together, he explains, it's that "full package," the couldn't-do-it-for-less-than-$499 package, that makes the Xbox One work. "So once you say that's the palette that everyone will have forever, that's really important."

Meanwhile, Sony hasn't even proved the PlayStation Camera can be used for experiences much beyond what you could do with the original Eye, or the last-gen Kinect. 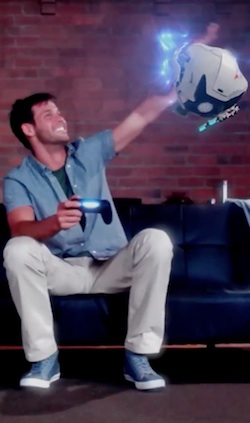 When I got upstairs and found the "tech demo" for "the camera," I found two people on a couch interacting with Sony'sThe Playroom game concept. It's a collection of terrible minigames, which show the different mechanics available with the combination of the Camera and the DualShock 4 controller - just with better graphics than most tech demos. You can flick sparks off the DualShock 4's touchpad, tilt the DualShock 4 to annoy the space robots, and bat around a space ball with your hands. The last of these, the one that actually relied on the camera, didn't seem to work very well, like it couldn't quite tell where the player's hands were.

Scott promised me that there are games in development for motion, and that Sony will "embrace" motion games if they have "great ideas." But why would any developer interested in an innovative motion concept even bother with the PS4 at this point? And why should gamers care? Motion wasn't a priority for the Xbox 360 and PS3 in the last-gen, and we all know how that turned out: big hardware sales, terrible games.

In the short term, the lack of Camera could be a huge win for Sony. It allows for that applause-inducing $399 price tag Scott Rohde is so fond of, and it also lets Sony focus solely on the "core" games that make or break a console launch. In fact, many PlayStation die-hards seem pleased Sony is ignoring motion gaming right now, just on principle. Additionally, the DualShock 4's touchpad and tilt controls will be great for developers porting over mobile games, or looking to offer a simple-to-implement motion experience.

But what happens in a couple years when the prices even out and Microsoft has a few "killer apps" under its belt? What happens when PS4 early adopters experience a Kinect-augmented "core" game at a friend's house and get a little jealous? These games aren't just theoretical anymore, they're here at E3, and they provide for new immersive experiences never before possible. Will we have to wait for the PlayStation 5 to have those experiences on a Sony console?