Between Computex and Apple, Intel says latest silicon is largest generational leap ever

For years now, it seems everyone has been waiting for Haswell, the latest processor from Intel that promises major improvements to graphics performance and battery life. The new silicon just officially launched last week at Computex Taipei, and we’re starting to see the first machines that take advantage of it, including Apple’s updated MacBook Airs. Apple promises the new Airs will deliver 70 to 80 percent better battery life and graphics that are up to 40 percent stronger than the previous Ivy Bridge-powered models.

Those are some impressive numbers — if they hold up in real-world testing — but Haswell’s been billed as revolutionary, and the new Airs are anything but. Apple decided against tossing a Retina Display into the slim machines, and, presumably, if engineers thought Haswell would be good enough to maintain great battery life and performance with a high-res screen, we would have seen a Retina MacBook Air at WWDC. The question remains, then: Has Haswell delivered on the hype?

Leading up to this month's announcement, news about Haswell has been almost universally positive. Intel's been branding the new processor tech as its "largest generational leap ever" with "the biggest performance improvement ever in battery life," as Intel's executive VP of sales and marketing Tom Kilroy boldly stated at Computex's opening keynote speech. The superlatives don't stop there: Navin Shenoy, vice president of the company's PC Client Group, told VentureBeat that "it’s the complete reinvention of the computer as we know it."

"It’s the complete reinvention of the computer as we know it."

Intel's partners (unsurprisingly) have touted the improvements featured in the next-generation processor as well: in a sizzle reel of sorts played at the company's Computex keynote last week, a lineup of top executives from Taiwanese tech firms had nothing but good things to say. Acer corporate president Jim Wong said, "We see even higher performance with very amazing power management," while an executive from manufacturer Quanta claimed that there "has never been a processor like this with such great performance and great battery life." The rest followed suit.

Much of Intel’s excitement over Haswell has revolved around the so-called "2-in-1" convertible tablet and laptop combos that’ll be enabled by the processor tech, with Kilroy stating in his keynote last week that they have the "opportunity to change the course of computing." Executives like CTO Justin Rattner also think Haswell can revive the PC industry, stating in an interview last month that "the PC itself is far from dead" and that innovations made possible by the new processors will be "having people rethinking purchase decisions almost immediately."

Product managers — some of the few who’ve spent extensive time with the latest processors — told The Verge at Computex that they were particularly skeptical that Haswell would help revive the PC industry, which saw its steepest quarterly sales decline ever this year. MSI's Clark Peng stated rather bluntly that "no one will really care about [performance] ... the customer is asking, 'Show me what is special [about the form factor].'" He makes a good point: the PC industry has matured enough that year-over-year performance improvements are more evolutionary than revolutionary, and older laptops continue to get the job done. Processor performance just doesn’t interest consumers enough to spur computer purchases anymore.

Even if Haswell manages to gain the attention of everyday consumers, price remains an issue. An Asus notebook product manager told us the primary reason the new processor generation wouldn’t boost PC sales was cost — a point that’s been made by several reporters since Intel revealed its pricing plan. When compared to launch prices for last-generation Ivy Bridge chips, OEMs face a significant premium to use Haswell in their latest machines. Lastly, product managers also tell us that Haswell's too new to make an appreciable difference — they need more time with the processor. Intel may be talking about a new era of 2-in-1 computing around Haswell, but companies like Gigabyte told us that we're "probably going to see a lot of basic stuff that you're used to seeing," explaining that it might take "another year or half a year to see much more newer designs come out."

"You're probably going to see a lot of basic stuff that you're used to seeing."

Scanning the booths at Computex, it's hard to rebuff these product managers' comments. Of the scarce few brand-new computers designed around Haswell, it's hard to find a truly unique new design enabled by Intel's chips. The funky Acer R7 comes to mind, but it's launched with last-generation Ivy Bridge processors. Most of what we've seen so far are either updated versions of old laptops with new silicon, or thin, attractive ultrabooks that look promising but are far from being game changers. Considering that an all-new operating system (Windows 8) and convertible form factors have failed to turn around PC sales, the introduction of Haswell will likely do little to reverse the industry’s trajectory. 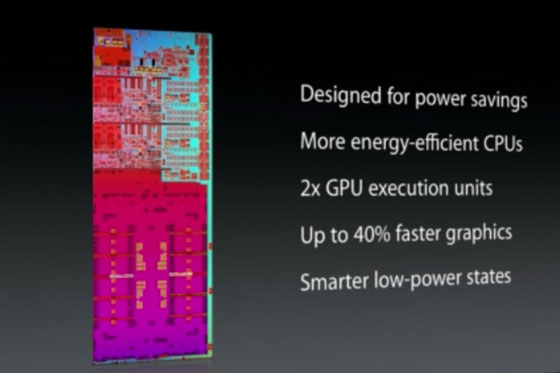 Beyond Intel’s lofty goals for a reinvigorated PC industry, product managers bristled a bit at the idea that Haswell was a revolution. Across the board, they noted the graphics and battery life boost offered by Haswell, but they cast those improvements in a different light than Intel. A product manager from Asus was uncomfortable with Intel's claims that Haswell represented the largest generational leap ever, stating that it's "just a next-generation processor, not a huge jump." Product managers seemed to be reluctant to label Haswell as revolutionary because performance boosts depend heavily on which type of processor you use.

Intel is offering multiple tiers of integrated graphics with Haswell, and only the best and most expensive chips will offer so-called "Iris" and "Iris Pro" graphics. These are the chips that Intel is using to spearhead its graphical push, with claims that the performance is comparable to discrete graphics chips like the one found in the 15-inch MacBook Pro with Retina Display. Lower-tier and low-power Haswell chips, which we should expect to see in the majority of mainstream laptops and ultrabooks, will feature integrated graphics branded with names like Intel HD Graphics 4600 and Intel HD Graphics 5000, which will offer a far less impressive improvement over Ivy Bridge. In one of the few real-world tests available, AnandTech found the ultra-low voltage Haswell chip in Acer's new Aspire S7 ultrabook offered only a 15 percent graphics improvement over last year's model. Intel hasn't misrepresented the graphical performance in these low-power chips, but it was only last month that it clarified the integrated graphics tiers within Haswell, and it seems that some consumers have confused the boosts offered by high-powered Iris- and Iris Pro-equipped models with those that are found in products like the new MacBook Air.

"It's just a next-generation processor."

Intel's primary focus for ultrabook-ready processors was to improve battery life, not graphics performance. Product managers were impressed with the battery savings offered by low-power Haswell chips, saying it's "a big difference from last generation," and AnandTech's review did find a nearly 60 percent improvement in the Acer S7's battery life over last year’s model (taking into account the larger cell found in the new machine) when performing light web browsing. Additionally, Apple claims that Haswell gives its new 13-inch MacBook Air around 70 percent better battery life, bringing the total to 12 hours (note: the new model does have a roughly 8 percent larger battery). Even if Apple is being a bit optimistic with those estimates, Intel deserves praise for the improvements measured with the Acer S7. Like graphics performance, however, it seems battery life improvements depend on which Haswell model you evaluate. The mainstream and more powerful Haswell chips, according to an MSI product manager, don't offer much of a battery boost. As another product manager said (referring to these beefier Haswell processors): "Battery life is longer, but not very obvious."

That’s not to say that these improvements aren’t extremely impressive and welcome: if you’re looking to buy a new laptop right now the battery life or graphics boosts should be well worth the price over an outgoing Ivy Bridge model; just don't expect massive improvements to both in the same machine. Of course, it’s best to wait for some reviews first, and we should have plenty over the coming months. In the meantime, we're still reserving our judgment on Haswell, but with these fourth-generation Core processors, it looks like the devil's in the details.