At the Cable Show, an industry fights cord-cutting with technology

At the Cable Show, an industry fights cord-cutting with technology

Cable companies are keen to show off why they still matter

On a philosophical level, "cord cutting" is a bit like global warming. Do we fully understand its scale and impact? Amidst the ongoing debate, 250 exhibitors representing the multibillion dollar cable industry converged on Washington, DC this week for their annual convention. And while we wouldn’t say a sense a fear permeates the Cable Show, there’s clearly a sea change in attitude as various stakeholders in the notoriously slow, bureaucratic market innovate and iterate at a quicker clip than ever. Topics and technologies that were once verboten now lead the way — and we’ve got exclusive details on two interesting new solutions from cable frenemies TiVo and Sling Media.

iPads as TVs, Roku and Xbox as cable set-tops, smartphones as remotes

3D may be dead, but "TV Everywhere" was quite literally everywhere on the show floor. iPads as TVs, Roku and Xbox as cable set-tops, smartphones as remotes. And in the category of strange bedfellows, The Verge has learned that Arris (busy subsuming Motorola Mobility’s cable operation) is offering its cable partners a Slingbox product to move four independent streams of live and recorded television around the home — or beyond, should the video distributor’s tolerance for risk and / or licensing permit. At least one Cable Show attendee is currently suing satellite provider DISH Network for implementing similar Sling placeshifting technology, so the jury’s still out (quite literally). 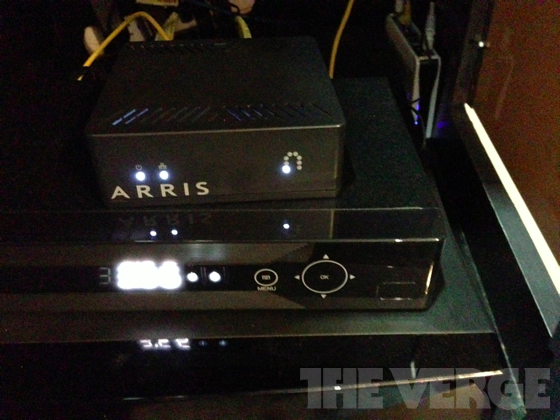 An Arris-branded Slingbox, marketed to cable companies, was quietly being shown at the Cable Show this week.

With TiVo now fully ensconced within Big Cable’s warm embrace, it too is expanding TV Everywhere options for existing and potential partners. And, for the first time, we’ve seen its new web portal in action. Although we weren’t able to spend nearly enough time exploring the offerings, it appears to do a fairly comprehensive job of replicating the iconic television-based TiVo interface as a point-and-click UI. Video playback capabilities and available modules would presumably (and once again) vary by operator and licensing. But we anticipate TiVo will formally unveil TV Everywhere in the near future, with Atlantic Broadband and RCN on tap as the first US providers to implement the solution for their cable subscribers.

No cable conversation is complete without mentioning Comcast, the largest operator — both its keynote and booth dominated the show. With intentions to make cable "cool" as it fights public perception, it announced the X2 cloud DVR. Unfortunately, beyond providing a more progressive approach in regards to the set-top experience, modernizing and integrating legacy infrastructure remains a challenge. So, while Comcast may have shown an all-new set-top box, its 2011 predecessor, the X1, is only currently available in 10 of more than 80 markets. 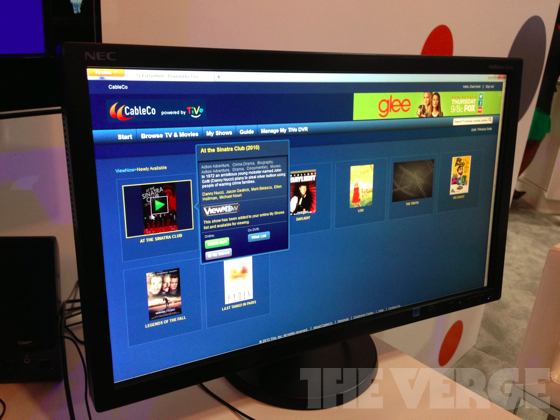 TiVo is working on a web-based version of its well-known user interface.

In addition to technical innovations, we’re seeing increased partnering and new alliances as operators and their suppliers attempt to improve efficiency and eke out better margins given rising expenses. Along those lines, we encountered several of the more than 70 licensees of Comcast’s Reference Design Kit (RDK) for set-top boxes, including the motion control whizzes at Hillcrest Labs — imagine Wii-esque remotes, like the one it developed with Roku, coming to your cable box. That’s the supposed benefit of the RDK — with a universal software framework shared amongst operators and their vendors, development time should be significantly reduced with the potential for new collaborations (and, hopefully, more interesting products landing in subscribers’ living rooms more quickly). Not on display at a Cable Show booth or session, but a topic of discussion nonetheless, were related hints of further industry consolidation with players like Charter, Cablevision, and Time Warner Cable potentially coming together.

Of course, cable is much more than video and the companies are hedging their bets. They’d probably like to remind us their industry provides nearly 60 percent of US broadband, to the tune of 51 million subscribers. Further, the cable operators and the content companies are often one in the same. Combined with new home automation, security, and neighborhood Wi-Fi initiatives underway and on display, "cable" appears quite committed to remaining relevant and providing value in the era of Netflix and BitTorrent. But is help from former startups TiVo and Sling enough to prevent cord cutting and stave off a "cord never" generation?