Google pushed out a couple of app updates for Android smartphones and tablets on Wednesday; one for its Google+ app and one for its recently redesigned Google Play Music app. The Google+ update is part of a revamp of the social network's notification system, and is one of the first Google apps to make use of Android's new synced notifications feature, which eliminates the need to clear the same notifications across multiple devices. The notifications panel has been updated with a new bell icon for new alerts, and the app has also received some photo management improvements and more sharing details on each post. The new notification system is also rolling out to the web and then to iOS users in the future.

The updated Play Music app addresses a number of complaints that users have had since Google launched its redesign and All Access streaming service last month. The update allegedly fixes the slow downloads for storing music from the cloud on your device, and a new mobile network bandwidth usage setting reduces the apps overall data consumption.

Both updates are rolling out to the Google Play Store now, but as has been Google's fashion recently, it make take some time before they are available to all users. 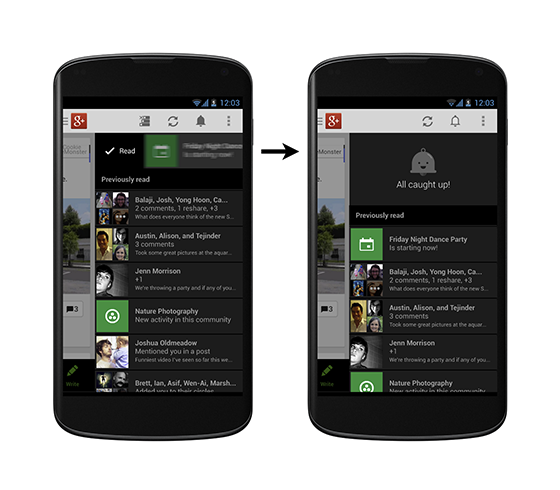