Ball physics: next-gen sports games are more real, and more fun, than ever

Ball physics: next-gen sports games are more real, and more fun, than ever

I pressed A to pass the ball from Messi to Neymar, but I didn’t expect what happened next. Messi tapped the ball lightly with the outside of his foot, shifting it past the defender just-so. And Neymar didn’t wait for the ball to come to his feet — he instinctively took off running, let the ball skip under his feet, and in one fluid motion trapped the ball and turned toward the goal. He stutter-stepped to get into position, and ripped a left-footed shot that curled away from the goalkeeper into the top-left corner of the goal. As Barcelona players ran toward the sideline to celebrate, I raised my arms in triumph inside EA Sports’ Ignite Lab, and informed my crestfallen opponent of just exactly how much he couldn’t handle my mad FIFA 14 skills.

Inside the Ignite Lab at its massive, blue-tinted booth throbbing with dubstep, Electronic Arts is showing off the future of sports video games. It’s starting with four: FIFA 14, Madden NFL 25, NBA Live 14, and *UFC 14. The games are designed for the Xbox One and PlayStation 4, and they say the new hardware is letting them build the game they've always wanted to build. 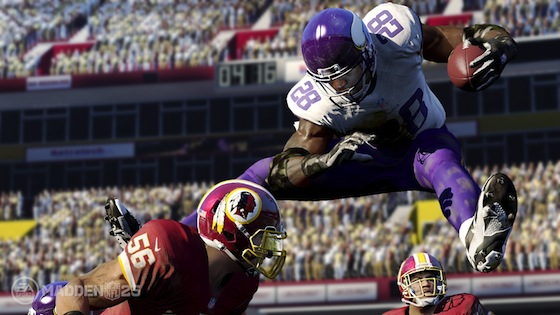 For sports fans, realism is the only thing that really matters

Sports games aren’t like other games. Graphical fidelity, gimmicky gameplay, features, and options are great, but most of all everyone wants the games to feel real. We want to feel like we’re God, watching a match and then controlling the players as we see fit. "What most of our fans really want," FIFA executive producer David Rutter tells me of the run-up to FIFA 14, "is a very boring gameplay camera going up and down to see how the players are reacting to each other, how the passing works, and things like that."

Rutter says that the next-gen hardware on the Xbox One and PS4 has finally offered EA the horsepower to make games as real as we’ve always wanted. It all comes down to animations and algorithms: huge RAM and processor speed increases allowed the developers to give players more decisions to make, and more things to do. In NBA Live 14, for instance, there are more than 1,000 animations for a player’s basic motions as they move around the court — players couldn’t run or juke or shoot certain ways before because there just wasn’t code for that anywhere, and now their options are essentially limitless.

That kind of bandwidth also lets EA makes its players make many more decisions much more quickly, which makes the game feel more fluid and more natural. In Madden NFL 25, offensive lineman can calculate their position and their job up to 60 times a second – they can change their blocking assignments on the fly, force their men in new directions, and quickly recognize new threats. In FIFA and NBA Live, Rutter says a new decision is made every time a player takes a step. "Rather than it being an animation that's on a wheel, and you roll the wheel to see how far they should go, what I do is I put my foot down, I move my balance onto that foot, and from there I can move myself anywhere. I put my foot down and I move." 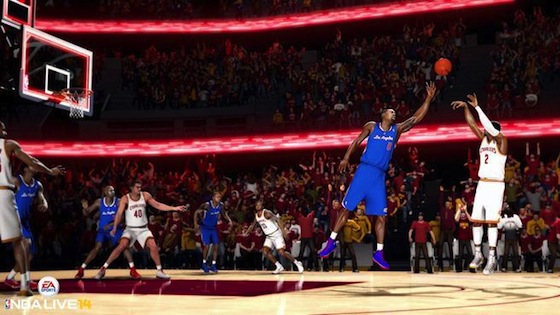 It’s all in the service of making players feel sentient, of letting them make decisions and react as a human would. "What we're now doing is looking into the future," Rutter said. "What makes a human move is anticipation. So now, if I run toward you, you're going to know I'm coming. You can anticipate that, and you can react. Players in our game now have the horsepower to do this. When we started to introduce runtime [on the PS2], you ended up with these very believable outcomes, but while the collision would look beautiful, the behavior was dumb, because they're not actually thinking about how to do that. Now, what we can do is actually have them not falling. So you'll see lots of skips, lots of nuance in their behavior that for a human, is what you learned growing up, but we never had that before in our game."

"What makes a human move is anticipation"

As I worked my way around the Lab, playing each of the new games — FIFA allowed us to actually play a game, on an Xbox One, while Madden and NBA Live were more controlled single-use demos — it struck me not only how much better the games look, but how different they feel. Flexible, sinewy players (the graphics are stunning) finally move around the field like I expect them to, both haphazardly and with real purpose.

Players on and off the ball react much more believably — defenders in FIFA go for headers they can’t quite reach, defenders lunge and dive instead of being suctioned into a tackle. Even the ball finally moves right, a point of pride for NBA Live Creative Director Gary Patterson. "The ball was hard-coded into the dribbling animation, so when the animation changes, the ball does funny things. It goes around the floor, or you get a double-bounce, or it gets stuck to their hand for an inordinate amount of time. Now, we've released the ball to physics... it works the same way dribbling works in real life."

Almost immediately, I found myself playing the games differently than I ever have. I quickly learned to lay off FIFA’s sprint button, because running too fast left me out of position if I ever lost the ball. I stopped trying to just run around the edge in Madden, because the defense figured out how to block me pretty fast. I stopped trying to barrel through defenders, because it just didn’t work. I played soccer… like you’re supposed to play soccer, smart and controlled and without trying to learn and exploit the game’s tics. The games feel more tuned to each player’s strengths and weaknesses, and makes every tackle feel real — the whole crowd yelled when Adrian Peterson took one particularly vicious hit, and trust me, I felt it too.

There’s much more left for EA to show of the next generation of games, and of the power of the new Ignite engine that lets all its games feel so much more realistic. The company is working on making crowds more impressive and more immersive, creating what Rutter calls "living worlds" in the game. It’s also keeping its online and motion-based plans close to the chest. But I played as Messi, and watched him tiptoe into the box before ripping a shot, and it looked just like Messi. And I could’ve told you I was playing basketball as Kyrie Irving whether he had his jersey on or not. It just feels real, and it’s immediately more immersive as a result.

But the moment that sold me was in Madden NFL 25. As Adrian Peterson, I barrelled through the offensive line, picked up about twelve yards, and was wrestled to the ground by a linebacker. A lineman continued to block, and accidentally shoved his man onto the ensuing pile-up. The defender stumbled for two or three steps, waving his arms to catch his balance, and then fell like a ton of bricks. Now that’s how you fall in a video game.