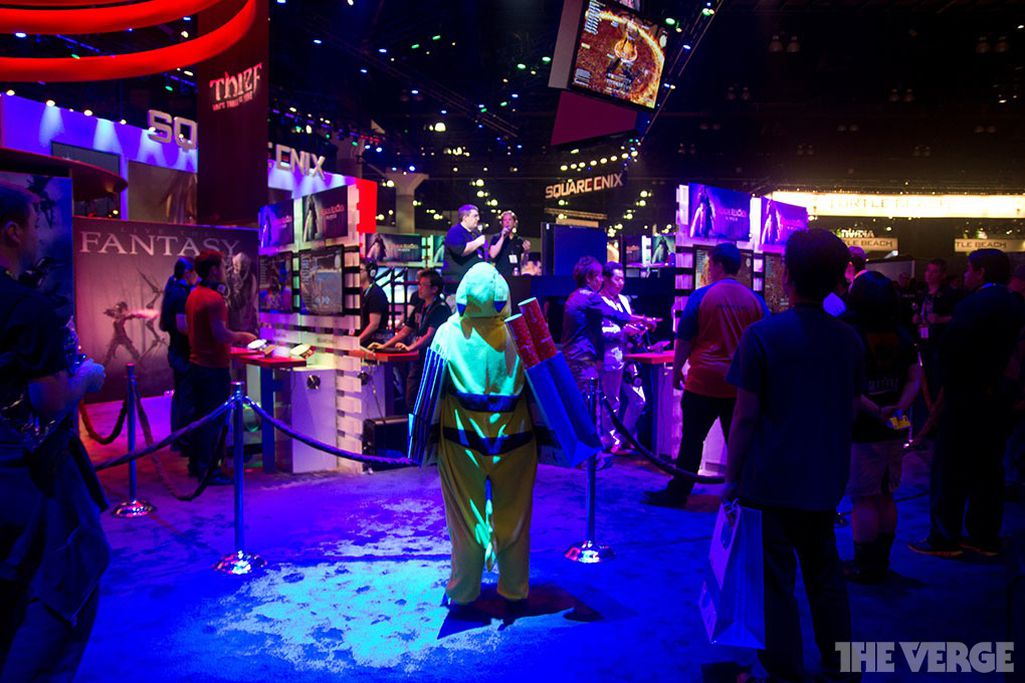 Nothing says “welcome to the most important trade show in the world” like a horde of zombies screaming and attacking you from behind a chain-link fence only to get bored and go back to gnawing on a blown-apart torso. If you survive this living diorama from Dead Rising 3 at the foyer of the South Hall, you’re left to explore the fantastic shitshow that is E3: It’s got all the giddy neon chaos of Blade Runner wrapped in the human density of a Martian Coachella, and navigating the floor requires a fundamental shift in experiential awareness.

All senses redline as you’re assaulted by interactive sculptures from some of the most creative and profitable minds at work today, and it is quite literally a war zone where mindshare is the ultimate bounty among competitors. It’s crucial that publishers get into the brains of these notoriously ADHD users, so production budgets are suitably astronomical and regularly run into the millions of dollars. These meta-consumers (representatives of Walmart, Gamestop, and Best Buy) need to be impressed enough by the towering exhibitions to buy and distribute the games to the masses in 2014.

So what do you get? Boobs, swords, lasers, machine guns, laser machine guns, more boobs, lots of "fucks," gushing blood, fast cars, and opulent cosplay (probably on top of more boobs), all blanketed by a complicated network of bass. Massive subwoofers are implanted at every juncture and always ready to underscore the vicious thump of a neck stab, bunker explosion, or high-speed crash. It’s pretty kewl, overall!

Massive subwoofers are implanted at every juncture

While games themselves are unquestionably at the heart of it all, the thousands of consoles on the floor are nowhere near enough to satisfy 90,000 "working" hands. As a result a lot of nerd-people spend a lot of nerd-hours not "working" and needing something else to do. In this bizarre paradigm where games are work, entertainment takes the form of the highly evolved video game trailer. Needless to say the whole existential media predicament sets the bar for this specific breed of "entertainment" pretty fucking high: In the midst of all the high-budget eye candy how does a game trailer get itself noticed?

Activision Blizzard’s solution was to build a theatre-in-the-round to match the monstrous scale of the worlds they’d created. Like a modified IMAX dome their display wrapped around a central raised platform where throngs of attendees queued up for a rotating trailer schedule for Destiny, Diablo III, Skylander: Swap Force, and their next-gen crown jewel Call Of Duty: Ghosts. As viewers waited for a spot on the platform (sometimes it was a long wait) huge flat-panel displays mounted on robotic arms bobbed menacingly around their heads, giving the whole package a J.J. Abrams-on-crack sort of vibe. 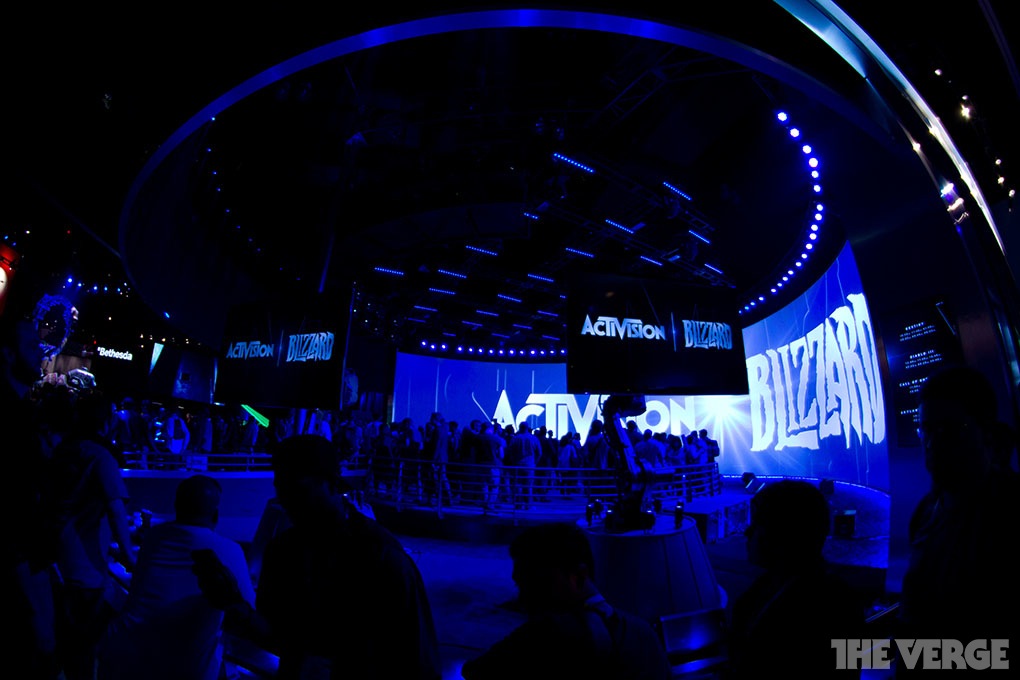 Because it couldn’t rez these people directly into the Ghosts game grid itself, Activision did its best to bring the world to them. The circular screen layered imagery of American cities being annihilated by enemy forces one by one over a dizzying list of zip codes which appeared with frantic speed under throbbing blood-red lights. As the blasts grew closer a clock clicked nervously down to zero above a list of targeted zip codes: 90012. 90013. 90014. And finally total darkness as the LA Convention Center itself is decimated, the room waking up moments later inside a militarized desert landscape with painstakingly rendered combat that will bring the franchise to American soil. While it was certainly the most immersive trailer installation on the floor, Activision Blizzard’s content compelled me with all the emotional density of Transformers: Revenge of the Fallen. While I was impressed in that "Dude," kind of way, I needed emotional sustenance to really launch me into a new world.

A few booths down Square Enix opted for a more traditional theatre, relying on decades of cutscene experience to tug at heartstrings in a more profound sense. The last RPG I played seriously was the three-disc PSX classic Final Fantasy VII, and after it nearly ruined my life 15 years ago I vowed to never venture into that realm again. But then I sat down on a red leather bench and saw the Final Fantasy XV trailer.

A low-flying camera captures a fleeting moment of our protagonists running scared through a hazy field of grass, then cuts to a hooded figure speaking in subtitled Japanese: "The world we purport to know is ever changing, ending as we speak." A young boy in an opulent dining hall sits across a long table for a meal of green sludge with his warlord father: "It’s awful," he says. Dad gently replies, "You mustn’t say so, lest the cook be sent away" as he playfully sticks out a green-tinted tongue. There’s a brief burst of gameplay as the protagonist rages through a castle, destroying exquisite furniture in a way that hints at something profoundly non-RPG. But the rest of the trailer is all high-drama renderings of a world I know nothing about. There’s a post-Hollywood level of plot and character development that reignites my passion for the franchise and piques the curiosity I know will only be quenched by diving yet again into this expensive next-gen world.

This is the template for the entertainment section of E3: precious little gameplay interspersed with footage of a fascinating universe of characters we’re only vaguely familiar with. Konami also brought back another teenage hero of mine in the Metal Gear Solid: Phantom Pains teaser. Konami’s production is half montaged action vignettes and half character sketches, the most poignant portrait the one of "Betrayed Snake," a soulless hellion who guns down a prison full of African war refugees like so many fish in a barrel all while smoking his signature cigar, which has taken the very silly 2014 turn of being an e-cigar.

The only trailer on the floor that felt like more than just a whiff of the actual product was Ninja Gaiden Z: Yaiba, a cel-shaded open platformer that reboots the wall-jumping assassin as a drunk asshole with the morals of a rabid jackal who can’t finish a sentence without a barrage of obscenities ("Honor and death go together like hot sauce and my balls"). In the trailer we get the backstory of how he sunk to this state of shame; playing the demo itself felt like an extension of the trailer probably because the hand-drawn blood-spew aesthetics were easily recreated within the game engine itself. The whole things feels like the digital personification of a Skrillex song: seemingly discordant stabs of noise and action across the sensual spectrum that come together to mean something more than their individual parts would belie.

Divorced from the products they represent, the game trailers of this futuristic now are the ultimate expression of creative freedom in entertainment. Because they’re just teasers, they’re set free from the bounds of any real story arc, leaving scenes and characters in a sort of hyper-sensile purgatory that’s only unwound by playing the actual game — an activity that presumably will occupy far more than five minutes of the consumer’s day. The characters themselves, synthetic to the core and limited only by the the extreme limits of the director’s imagination, can exist in an unknown realm that most people will never understand or experience. And since these are produced during the early developmental stages of game design where everything is a work in progress, there’s not a whole lot of narrative continuity these trailers need to adhere to; I doubt that, when Final Fantasy XV finally does come out next year, anyone will be checking back on its ancient teaser trailer to see if any of the details are missing from the final product.

Because they’re just teasers, they’re set free from the bounds of any real story arc

As I watched people line up outside the Activision Blizzard rotunda I thought of those nerds who waited outside movie theatres at 11PM the day before Star Trek: Into Darkness was released last month. They’re not very different, these two groups of enthusiasts. It will only be a matter of time before we’re actually paying to watch these outlandish sketches in purpose-built theatres all over the world, a little like the Grindhouse model of fake trailers that Quentin Tarantino and Robert Rodriguez popularized in 2007: It’ll be that idiocratic pinnacle of entertainment for entertainment’s sake, a mere vessel for those extreme adolescent moments we all need to sink into from time to time.

While video game trailers probably represent the opposite of what’s important to human evolution, that’s not really the point. The point is FASTER BOOBS ALIENS EXPLOSIONS and it’s a point that I think the gaming community takes itself lightheartedly enough to appreciate. What I’m really worried about is the next inevitable evolution: people who watch game trailers, but don’t play games. That’s when I’ll lock my children inside and start keeping a shotgun next to the front door.