Semen solution: can a sperm bank save bees from oncoming extinction?

Semen solution: can a sperm bank save bees from oncoming extinction?

Bee populations are on a dangerous decline, but a plan to stockpile reproductive fluids might offer the solution

Honey bee colonies around the world are dwindling, and the consequences threaten to be severe: We rely on these bees to pollinate myriad agricultural crops, including one-third of crop species in the US alone, making their disappearance a genuine threat to the human food supply. Now, one team of researchers has come up with a unique technique to prevent what's known as Colony Collapse Disorder (CCD): a honey bee sperm bank.

A group at Washington State University is traveling the world to collect sperm samples from various honey bee subspecies. To do it, they simply squeeze a male honey bee's abdomen, which releases a small quantity of sperm that's collected in a syringe. From there, the researchers plan to cryogenically freeze that sperm, in an effort to develop a robust, diverse library of genetic material from which to conduct cross-breeding.

"Having semen in liquid nitrogen won't solve every problem. But it can help."

The end goal? Something of an ultimate super bee, capable of withstanding many of the environmental and human factors thought to be behind increasing rates of CCD. "Having semen in liquid nitrogen won't solve every problem," Steve Sheppard, an entomologist at WSU and the project's leader, told The Verge. "But it can certainly help."

The problem that Sheppard and his team are trying to solve is, indeed, a daunting one. Earlier this year, a consortium of researchers led by the USDA reported that 31 percent of commercial US bee colonies had been killed off or disappeared the previous winter. Honey bee populations have been declining for decades, but their decimation has been occurring at increased rates since 2006, when some beekeepers reported losing anywhere from 30 to 90 percent of their colonies. Unfortunately, experts have yet to determine exactly how to curb these losses — which is where the sperm comes in. 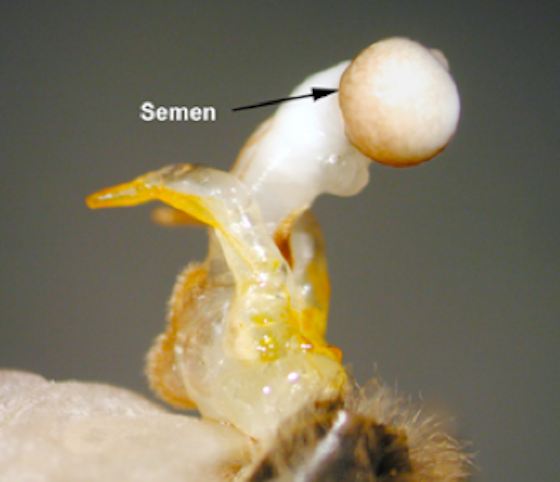 Before it can be preserved, semen is extracted from mature drone bees by squeezing their abdomens. (Credit: WSU)

31% of commercial US bee colonies died or disappeared in 2012

The WSU program could, one day, yield honey bees with significantly different traits from those currently inhabiting American colonies. And that's a big deal: Since 1922, the import of foreign honey bee subspecies — of which an estimated 28 exist worldwide — has been tightly restricted due to concerns about the spread of a bee-killing mite that once destroyed English bee populations. As a result, the genetic pool among American honey bee colonies is extremely small, making it tough for breeders to select for bees whose traits make them more resilient. "Selective breeding is, of course, done with other animals, but it hasn't been done effectively with bees," Sheppard said. "Because logistically, there just wasn't a good option."

In 2008, Sheppard and his colleagues got USDA clearance to start importing the sperm of three foreign subspecies: Italian honey bees that reproduce rapidly, as well as bees from the eastern Alps and Georgian mountains that can withstand cold temperatures and tend to reproduce later in the year — mitigating the risk that cold weather in early spring might kill off an entire brood. The Italian subspecies would suit the needs of beekeepers in the southern US, who need bees that can rapidly pollinate in the early spring, while mountain bees would address the requirements of beekeepers in cooler US climates.

"Being able to stockpile semen is a huge step forward."

But those imports weren't particularly helpful until now: Unless effectively preserved, honey bee sperm is only viable for two weeks, meaning that the team was forced "to have virgin queens ready to be inseminated" as soon as the imported sperm arrived. "Being able to stockpile semen is a huge step forward," Susan Colby, a research associate at WSU, said. "We can collect samples that might not be useful now, but might carry a trait that will be important 20 years into the future."

In addition to bees with diverse climatic tolerance, the team is hoping to cross-breed for resilience. Tougher bees might be able to survive the potentially deadly impact of certain pesticides, which are thought to interfere with honey bees' internal radar and thereby prevent them from collecting pollen and locating their hive. Certain genetic traits can also be targeted to protect colonies of the future from parasitic mites, viruses, and bacterial ailments all cited by the USDA as possible contributors to CCD among US bees. "Instead of relying on miticides or antibiotics to prevent an illness, for example, we can breed bees who resist that illness altogether," Sheppard said.

The team is hoping to cross-breed for resilience

The sperm bank is still in its early stages, with only a handful of preserved samples ready for examination and — if a sample's genetic material is up to snuff — injection into the oviduct of some lucky queen bee. But Sheppard and Colby, who will next week travel to Italy to collect more sperm samples from several colonies, anticipate rapid growth in the years to come. "I don't know how much we'll need," Colby said. "But our goal is to collect as much semen as we can."