The Oculus Rift was made for space battles: inside the virtual cockpit of 'EVR'

The Oculus Rift was made for space battles: inside the virtual cockpit of 'EVR'

Even as the Oculus Rift has gotten tremendous attention from the gaming world (among other things, Epic announced a partnership with it for Unreal Engine 4), designing a good game for it has proved difficult. Virtual reality throws a wrench in well-established genres like the first-person shooter, turning something as simple as aiming into a conundrum. Oculus itself has suggested things like exploration games, but EVE Online studio CCP thinks it's found another answer: send everyone to space.

At E3, I got a chance to try EVR, a dogfighting game built to take advantage of the Rift's capabilities. After strapping on the headset, you'll find yourself inside a tiny spacecraft's cockpit, virtual body manning the controls. The game pits two teams of three against each other in roughly five-minute battles, using a combination of gamepad and head controls. You'll move with a stick and fire fixed lasers with the right trigger, but it's the left trigger that's really fun: hold it down and look at another ship, and a missile will lock onto it and fire when you release.

Space combat: a natural fit for the Rift

Putting you in a spacecraft neatly sidesteps some of the Oculus Rift's biggest problems. If you walk in VR, you're looking around with natural head motion, but your body is still controlled with a stick, creating a weird mix of the real and artificial. Efforts to get around this are still working on getting people to walk in a straight line. In a virtual cockpit, the issue is completely moot: You don't expect to be able to do more than look around.

EVR is still running on the early, low-res version of the Rift, but even that is mitigated by the setting. I have no idea what being in space looks like, and it's not hard to suspend disbelief and imagine that you're wearing some kind of helmet. From there, you're free to concentrate on the exhilerating experience of soaring around asteroids and dodging missiles. 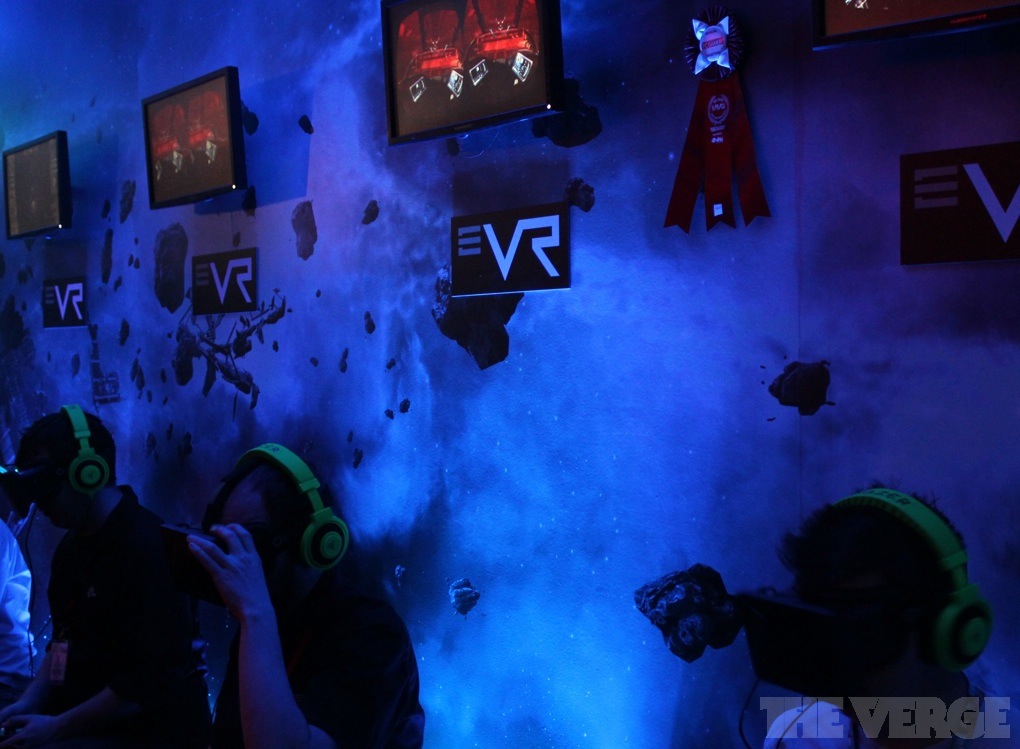 It's also one of the rare times when the Rift really seems like a natural form of interaction. I've pretty well optimized how I walk and aim in a shooter, and introducing head tracking can just confuse things. By contrast, I'm generally awful at figuring out the perspective in flight games. Allowing me to actually look around while moving didn't make me good, exactly, but I no longer felt lost. And aiming with your eyes is both awesomely futuristic and a pretty good way to zero in on a ship, especially because you can look away as soon as the missile has fired. Not having to align a "body" means you can lock onto something at any angle — above your head or to your side, for example.

Of course, there are still moments when playing with a Rift is weird and awkward. When you look down, you'll see a sexless body in a gray flight suit, hands resting on either side. While the real me shifted my legs or moved my hands on the gamepad in a fight, the virtual me... stayed completely immobile. And if you think jumping around in virtual reality is disorienting, try tumbling end-over-end in the vacuum of space. Fortunately, the spare environment means you aren't constantly reminded of how fast you're going, and the controls are forgiving.

EVR is far from a finished product. CCP says a team developed it over the course of seven weeks, initially as a side project. The section I saw at E3 is essentially a proof of concept, though it's possible it will be developed into a full game and released for the Rift. When might we see that? The team wouldn't say, and the headset isn't anywhere near established enough to support a commercial game with its user base. But EVR's mere existence is a major point in the Rift's favor.