Standing with Snowden: the nerdy past and uncertain future of a whistleblowing icon

Share All sharing options for: Standing with Snowden: the nerdy past and uncertain future of a whistleblowing icon

"I'm not sure I know who Edward Snowden is," a middle-aged man remarked as he wandered past the Union Square subway station. It was pouring rain in Manhattan, yet just a few feet away a diverse crowd of demonstrators had gathered around the subway entrance, holding brightly colored poster board signs with that name written in black permanent marker.

I began to explain, as pithily as I could, that Edward Snowden is a 29-year-old intelligence contractor who had just outed himself after exposing the secret NSA surveillance program PRISM, which, according to slides published by The Guardian and the Washington Post, collects communications from nine major internet companies. "Good for him!" he interrupted, just as I was preparing to explain the tedious technical details. "The Fourth Amendment is gonna go down kicking and screaming 'till the bitter end."

"The Fourth Amendment is gonna go down kicking and screaming"

Organized through Twitter and Facebook, the rain-soaked rally came less than 24 hours after Snowden, a former NSA contractor, revealed himself in a 12-minute video posted to The Guardian. The dedicated crowd totaled around 40 people, and was barely visible behind the onslaught of news crews attempting to capture the scene from beneath a canopy of umbrellas. Still, they were here — even if little was known about the man they had come out to support.

When Snowden's video began circulating on Sunday, Debra Sweet, director of the anti-war organization World Can't Wait, had just finished leading a panel at Pace University alongside NSA whistleblower Thomas Drake and FireDogLake writer Kevin Gosztola. "It was just stunning and amazing to see this really articulate, sincere, and well-produced argument," she recalled. "I've been doing this kind of protest for decades specifically opposing government surveillance, and I've never seen someone come forward that quickly."

Snowden’s surprise appearance has already distinguished him from Bradley Manning and other whistleblowers that came before him. The obscurity of Manning, now on trial for leaking thousands of documents detailing the secret histories of the Iraq and Afghanistan wars, gave the state ample room to demonize him as a reckless, emotionally disturbed "lone wolf." But in choosing to come clean and explain his motivations openly, Snowden, quite cleverly though at great peril to himself, has instead forced the discussion of his own fate — and that of government mass surveillance — directly into the public forum.

As David Carr observes in the New York Times:

In spite of the uproar around WikLeaks and a new age of electronic drop boxes, there has never been a shortage of whistles; what has been in short supply is people to blow them. In this instance, the Web is not just a repository of leaked material, but a means of changing the dynamics of the debate into a two-way affair in which the public has access to the leaker. The administration, in both its public remarks and its investigations into leaks, has tried to portray those who leak as marginal people with nefarious motivations. By using the Web and speaking on his own behalf, Mr. Snowden is not allowing himself to be defined by the government.That stance has undoubtedly set the tone as we learn more about the man behind what might be one of the biggest leaks in American history. Snowden didn't have much of an online presence to speak of, apart from a (now-deleted) profile on the website of a defunct Japanese anime company based in Maryland, where he worked as a webmaster when he was 18. The text and photos showed nothing damning or subversive about teenage Snowden — just a goofy, nerdy Japanophile who liked role-playing games, anime, and the video game Tekken.

"I don't want to be paranoid. I want to be protected, but I'm not sure where to draw the line."

One of his aliases, "TheGreatHOOHA," was active on message boards including Ars Technica's OpenForum, where he started a thread in 2003 about using proxy servers. When another user suggested he was being paranoid, Snowden’s alias replied:

Patriot Act. If they misinterpret [the] actions I perform, I could be a cyb4r terrorist and that would be very fucking bad.

The obvious solution is don't get caught — and this is the only thing I can figure, as HTTP, SMTP, and SSL are all involved. If you've got a better method, I assure you that I'm all ears.

Seriously, the reason I'm so concerned is because of the lack of understanding — that's why I made this thread. I don't want to be paranoid, I want to be protected, but I'm not sure where to draw the line.

On paper, Snowden's work history reads as a series of starts and stops. In 2004, he joined the army hoping to fight in the Iraq war, feeling "an obligation as a human being to help free people from oppression," but was discharged a year later without completing his training, reportedly after suffering injuries. He later got his first job working at the NSA as a security guard, and eventually moved on to work as a systems administrator for the CIA, where “his understanding of the internet and his talent for computer programming enabled him to rise fairly quickly for someone who lacked even a high school diploma,” according to The Guardian.

Around this time, Snowden began to question some of what he had been seeing. Another Ars Technica thread posted in 2010, about wiretapping capabilities purposely built into Cisco networking hardware, gives hints of a growing disdain for overreaching government surveillance:

It really concerns me how little this sort of corporate behavior bothers those outside of technology circles. Society really seems to have developed an unquestioning obedience towards spooky types.

I wonder, how well would envelopes that became transparent under magical federal candlelight have sold in 1750? 1800? 1850? 1900? 1950? Did we get to where we are today via a slippery slope that was entirely within our control to stop, or was it [a] relatively instantaneous sea change that sneaked in undetected because of pervasive government secrecy?

By then he had moved on to contract work, eventually landing a short-lived stint in Hawaii as an NSA systems analyst through Booz Allen Hamilton. Here, despite having stated his views in online forums, he became one of the 1.4 million Americans with high-level security clearance, allowing him to obtain the top-secret NSA documents which exposed the PRISM program before relocating to Hong Kong.

“Perhaps I am naive, but I believe that at this point in history, the greatest danger to our freedom and way of life comes from the reasonable fear of omniscient state powers kept in check by nothing more than policy documents,” he told Washington Post reporter Barton Gellman in an email, using the alias “Verax.” The expanding surveillance state, he wrote, is “such a direct threat to democratic governance that I have risked my life and family for it.” 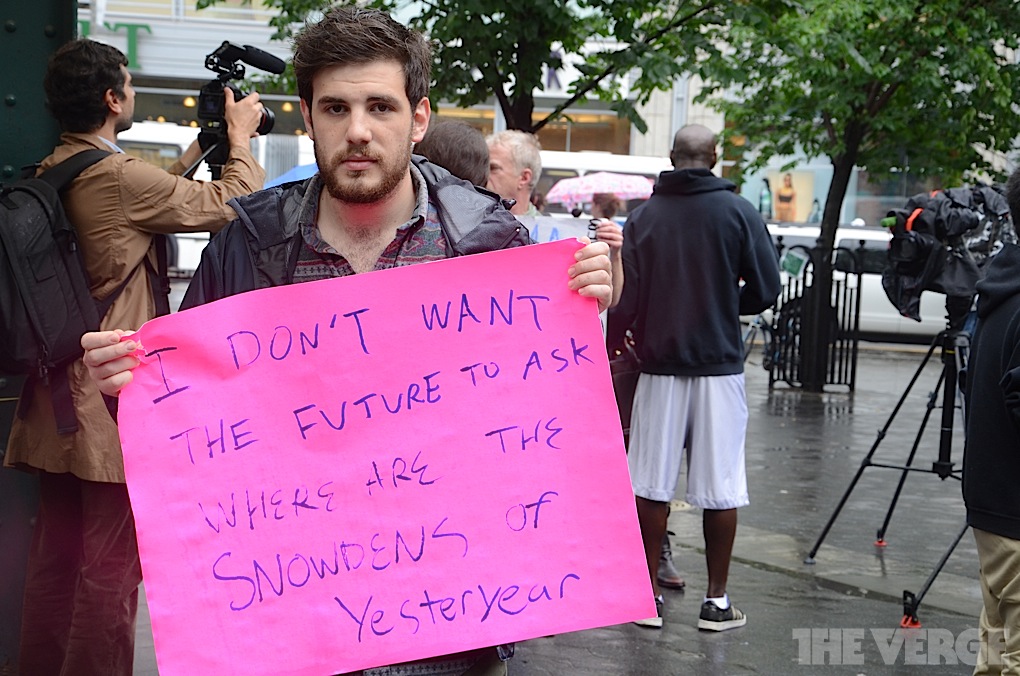 For those who gathered in Union Square this week, who Edward Snowden once was isn't nearly as important as what he’s doing right now — and how the government is going to respond. Republican Congressman Peter King, in a disturbing display of zeal, has been clamoring for the prosecution of both Snowden and Guardian journalist Glenn Greenwald, who published the leak. Other frustrated critics have resorted to name calling — Tom Brokaw described Snowden as "a high school dropout who is a military washout," while Jeffrey Toobin in the New York Times paints him as "a grandiose narcissist who deserves to be in prison." The FBI has already launched a criminal investigation into the leak, but China's foreign ministry has so far declined to comment on whether it will extradite Snowden or grant him political asylum.

"I don't know Edward Snowden, but I do know what he said," said Mano Cris, a stay-at-home father who came out to the rally after finding a sitter for his two-year-old and four-year-old kids. With a sharpie marker still tucked underneath his left thumb, he held a sign that said Thank you Edward, for choosing freedom over paradise — the "paradise" he meant was the house, family, girlfriend, and cushy six-figure job Snowden had left behind in Hawaii.

"At this point I think we have to stop talking about the security state. It's like discussing whether there's an elephant in the room," he said, just as the rain finally began to let up. "Yes, the PRISM system is very worrying and we could talk about it for hours, but I think that would really be missing the point of his actions ... that if we don't do something now, we soon won't be able to do anything at all."