'Rymdkapsel' mixes Tetris and StarCraft into one great mobile game

'Rymdkapsel' mixes Tetris and StarCraft into one great mobile game

I played a hundred new huge-budget video games this week, but the only one that really made sense to me was a cellphone and Vita game called Rymdkapsel.

Like many tower-defense games the primary objective of Rymdkapsel is to grow and defend your population. But when designer Martin Jonasson set out to make a viable StarCraft for mobile, he discovered that StarCraft probably isn’t something you’d want to play on your phone, and its most memorable component would probably be how much it crashed your OS. So he boiled it down, reducing and reducing until he came up with the most efficiently brilliant game I’ve ever played on mobile.

The game begins on a vectorized orthogonal grid in space, your playable characters materializing as two tiny pixel-sticks. As you assign them projects like corridor and kitchen construction time passes ominously in a simple red timer; enemy attacks appear at the end of each period. As attacks get bigger and faster the need for more resources becomes drastically clear, so your two minions must broaden their skill sets to include food services, reproduction, and energy extraction.

Even if you didn’t want to complete it, Rymdkapsel’s first sub-mission (of three) renders itself unavoidable — "researching" four TMA-1 type obelisks to gain speed enhancements, shields, and generator upgrades. It sounds a lot like any other tower-defense game, but the indie game’s reductionist foundation informs every aspect of gameplay and requires a level of meditative simplicity I’ve never experienced in a game this nuanced. Move too fast and perish for lack of resources; move too slow and perish for lack of resources. There is no level of button-mashing or lazy idling that will get you anywhere in this tiny universe — just a subtle balance that takes a huge amount of discipline to develop.

Simplicity also rules on a design level: It reminds me of my previous favorite, the mobile game Drop7. Blackness and basic polygons dominate the landscape; every sprite is illustrated with the old Swedish maxim in mind: "Everything you need, and nothing more." When a game is this tightly designed you don’t need texture maps to make it interesting — but when creative design choices do arrive they are full of subtle nods to other contemplative masterpieces like 2001 and Tetris. Even the soundtrack is a minimalist achievement, feeling something like an opioid 16-bit Boards of Canada. 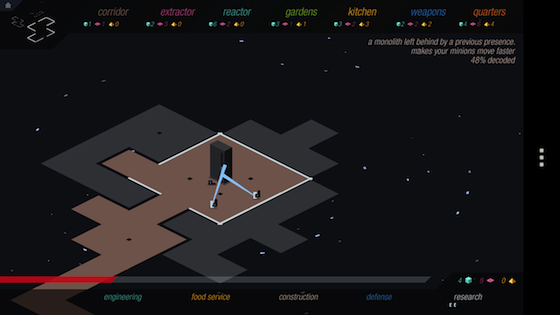 Amidst E3’s world of billion-dollar budgets there were very few experiences that felt truly revolutionary. Like the film industry, gaming’s biggest hits are nearly always sequels that rely on iterative improvements to the last installment: slightly more accurate player depictions in sports games, a new fighting technique in a tactical shooter. That’s probably why Rymdkapsel was the only thing on the whole show floor that felt remarkable to me on all levels — a small-budget strategy game with a lofty ideology; a one-screen world as opposed to an open universe; a defiantly individualistic challenge in a market that demands player connectivity.

The ever-efficient Swedes always seem to be my favorite artists; now Martin Jonasson has become my new creative champion by extracting a game from a precise vision like a sculptor shaves away miniscule layers from a block of marble. His artistic constraints required him to make something that’s far too rare these days: a game that makes you feel smarter as you play it. It is definitely my favorite game — and I haven’t even beaten the first level yet.

Rymdkapsel is $4.99 from the PlayStation Mobile store / platform. You can get it for your late-model Android phone here.