Digital empathy: how ‘Hunger in Los Angeles’ broke my heart in a virtual world

Digital empathy: how ‘Hunger in Los Angeles’ broke my heart in a virtual world

Earlier this week I stood in line outside a food bank in downtown Los Angeles. People chattered in my ears, but those in front of me didn’t move. I walked several steps down the line, leaning into the face of a stoic woman.

Behind me I heard the sound of commotion. A large man had fallen down, in the throes of a seizure. He was diabetic, and his blood sugar had dropped past a critical threshold.

I wanted to reach out to help. But I couldn’t do anything to comfort him.

That’s because none of it was really happening. 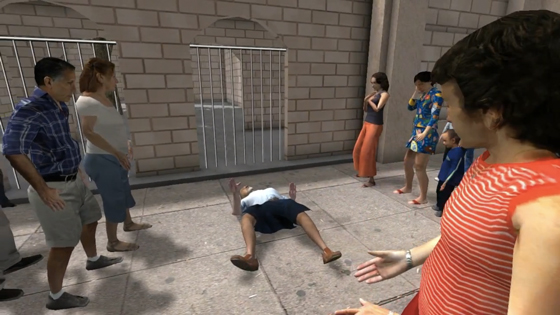 An experience in "immersive journalism"

Hunger in Los Angeles is what writer and director Nonny de la Peña calls "immersive journalism." The concept is simple: place individuals into a virtual recreation of a given moment in time, allowing them to experience — and draw conclusions — firsthand. While it debuted at last year’s Sundance Film Festival, I was able to try it at an interactive media event at the University of Southern California (the project was funded partially by USC’s Annenberg School for Communication and Journalism and its MxR interaction lab).

The original intent of the piece, de la Peña told me, was to create something focused on the growing hunger problem in the United States. Her colleague Michaela Kobsa-Mark went out into the field to record audio of people standing in line outside a downtown food bank, only to witness — and record — the diabetic man collapsing and the eventual arrival of paramedics. It changed the trajectory of her piece, giving it a much more immediate emotional hook.

To take the journey, you don headphones and a set of head-mounted VR goggles. (Oculus founder Palmer Luckey was a member of the MxR lab when Hunger was created, and worked on the prototype goggles used in the project before leaving to start his own venture). Sticking out of the top of the apparatus is a pole and set of crossbars, each tipped with a red light. A series of Phasespace motion-capture cameras line the room, and together the system allows you to walk around and explore the virtual environment as if you were there with complete freedom (save the cable tethering you to the computer, that is).

I’ve tried the Oculus Rift before, and marvelled at its ability to transport you into a virtual space (even with the prototype’s resolution limitations). I was able to take a Gravity-style virtual tour of the International Space Station’s exterior thanks to Richard Emms’ Spacewalk. And while I felt meta-wonder at the first and mild panic during the second, what I hadn’t experienced in any kind of virtual environment was an emotional connection.

That all changed with Hunger in Los Angeles.

The first thing I noticed was how easy it was to fall into the world itself. The graphics were relatively primitive, and the goggles I wore didn’t even completely block out my peripheral vision. But the simple act of being able to walk naturally — with every tilt and nod of my head reflected in my point of view — was instantly arresting. I recognized the geography of the location from my time living in Los Angeles, and with Kobsa-Mark’s uncut audio recording as my soundtrack I had an immediate sense not only of time and place but of reality.

I knew the set-up of the story going in, and when I heard commotion behind me — I was busy peering into the faces of the other folks in line at the time — I immediately knew the diabetic man was suffering his attack. I turned, and despite the crude animation the illusion held. My heart rate picked up, and I impulsively wanted to do something. My first inclination was to kneel down and hold him steady if I could, but at the same time I knew how ridiculous that would look to the cable wrangler that was standing behind me in the "real" world.

I finally cast those thoughts aside and knelt beside the man — but of course reaching out was impossible as I had no arms or legs in the simulation. I had the agency of perspective, but no ability to participate in the events themselves. It was a type of powerlessness I’d never really experienced before; watching on as the ghost of a tragedy played itself out one more time.

The ghost of a tragedy playing out one more time

The other bystanders in line simply stood and watched, and the moment grew incredibly awkward. I took a step back, folding my arms defensively, waiting for someone to help right this wrong. Time seemed to stretch on and on as the man struggled. At the front of the line, two women argued about needing more food. Finally, help arrived in the form of paramedics.

I was surprised at how much I cared

As I took the headset off I was quiet; shaken. I asked de la Peña about the diabetic man’s fate, and she assured me that he had survived the attack. I was frankly surprised at how much I actually cared. Sure, I knew I would be seeing a recreation of real events and that a disturbing scenario would unfold, but Hunger crossed a threshold for me. It made good on the promise of the holodeck and other sci-fi virtual environments, serving not just as an outlet for tech demos, but as a way to tell arresting stories and provide experiences that may not be achievable any other way.

Earlier that same day, Steven Spielberg and George Lucas had opined on the future of interactive technology, with Spielberg saying that controllers prevented people from truly engaging with interactive experiences. The mechanism of gameplay itself binds us to the base impulse of competition, he argued, and it was only when we were able to create immersive environments that something greater would be possible.

Judging by my reaction to Hunger In Los Angeles, I think he’s right. But even that misses the larger point. When it comes to virtual reality, focusing on gaming and traditional experiences is like looking to the TRS-80 for design cues on a touch interface. It’s using tomorrow’s tools to address yesterday’s problems, and it’s an extraordinarily narrow take on what will be a truly transformative technology. The challenge — and promise — of virtual reality isn’t to just help us rack up points or capture the flag.

The challenge is to make us feel something.