Harmonix says you control the music. I just felt like I was waving my arms.

Harmonix, famous for originating the modern music game genre with Guitar Hero, then following that with Rock Band, and Dance Central after that, seems like the perfect developer to bring Walt Disney’s Fantasia to life as a video game set to pop music. It doesn’t sound sacrilegious to me, it sounds like a lot of fun. Harmonix has always had a way of making me feel at one with the music — not entirely in control, but at least in sync.

I wasn’t having any fun

In a meeting room in the back of Disney Interactive’s E3 booth, I stood in front of the Xbox One’s Kinect sensor. A moving silhouette of myself appeared on the famous conductor’s platform, and I almost got chills. I couldn’t help but gesticulating as a faux conductor for a minute while the Harmonix guys waited to show me the actual game.

But then we began the demo, and I was the conductor no longer. In theory, you play Fantasia as the sorcerer’s apprentice. Perhaps this is appropriate, because as soon as the "magic" of the game began, I felt entirely out of control of everything in front of me. I was placed in a factory, where I was meant to instruct robots to fix machines in order to unlock song portals. I could step left and right to pan through the world, and my hand operated as a 3D cursor to bring various aspects of the world to life. But I felt removed from the world, confused by my tasks (even with copious tips from my Harmonix pals), and just… well, I wasn’t having any fun. It was a relief to finally unlock the wormhole that would take me to my first song: "Paradise," by Bruno Mars.

And that’s when I knew this game was no different from the humiliating, gimmicky motion games before it. To enter the wormhole you have to make a breaststroke motion, which is suggested to you by two arrows. And then the song begins, and arrows are everywhere, all telling you what to do. So you begin to wave your arms obediently, and everybody else gets to stand back and chuckle at you.

You swing your arms in the direction of each arrow in time, which works similar to a Guitar Hero strum; hits and misses raise and lower the volume of the music. Sometimes there are dots you can place both of your hands "on," with similar results. The big, high-stress moments are when a polygonal shape shows up and you have to swipe each of its edges to light it up — again, in time, when and where you’re told to. This game isn’t the next-generation of music games, it’s just Guitar Hero meets Fruit Ninja.

When you manage to break down one of those polygons, you’re presented with an object which lets you "compose" a synth riff, or a drum pattern, or similar solo. It works much like Propellerhead’s Figure software — your composition is constrained to an ear-pleasing scale, and synced to the correct timing of the song. You can’t make bad choices. Some of my riffs were better than others, sure — I’m particularly proud of my vocoder work on Fun’s "Some Nights" — but you’re not making your own music, you’re flirting with someone else’s. At least with Figure, your composition isn’t married to a pre-existing song. 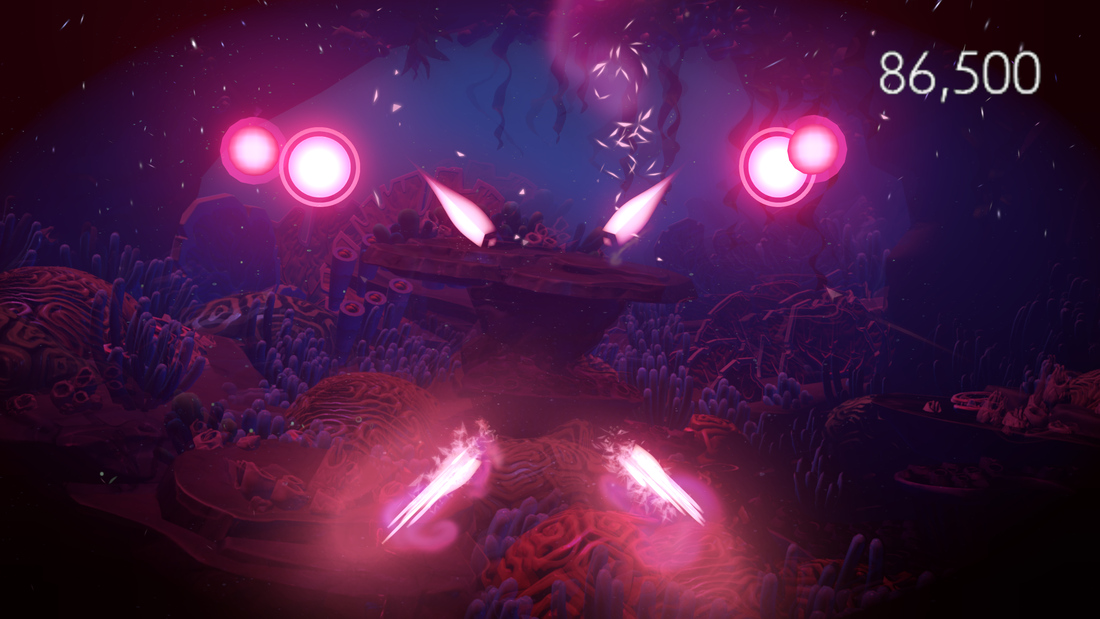 There are other, slightly more creative, modes in Fantasia. But the interface feels more like a puzzle in a Myst game than a sequencer. I don’t know if other people will like this. I’ve heard many positive things about Fantasia throughout the show, even from musicians, but I personally hated it.

This music is out of your reach

To Harmonix’s credit, the gestures required to operate the game are much more subtle than Kinect titles of yore. But it’s not different enough. I’m tired of trying to match the gestures a game wants from me, I want a game to respond to the gestures I want to make. It’s not just that I have a keyboard back home I’d rather make "real" music with, it’s the fact that I have other games in my library that let me make real choices with "real" consequences. Fantasia is more like an endless runner: you can jump over the tree root, or slide under it, but you can’t stop running and wander off into the forest.

I know everyone’s interpretation of Fantasia, the film, is different. To me it’s about visually demonstrating the majesty and transcendence of music. In a way, maybe Fantasia the game communicates something similar: this music is out of your reach. You can flail your arms, but you can never touch. That’s how I felt, anyway.