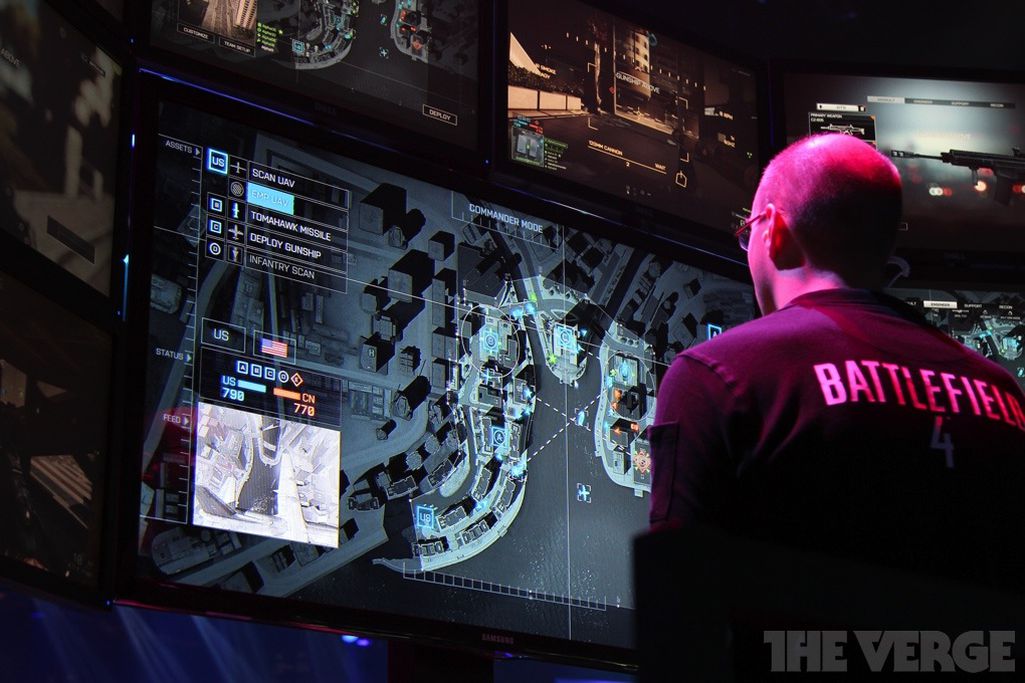 This November, the Xbox 360 will be eight years old. The PlayStation 3 will be seven. At the 2013 Electronic Entertainment Expo, we finally got acquainted with their successors. The new Xbox One and PlayStation 4 represent a new generation of consoles, the fabled "next generation," and with them comes the tantalizing possibility of "next-gen" games. Why else would we spend upwards of $399 on a new game console?

What does a next-gen game look like, though? What does "next-gen" even mean? Going into E3 2013, we had no idea what to expect. So on Monday morning, we made it our mission to answer this question. We tracked down the most advanced games, watched dozens of demonstrations, interviewed their developers, and occasionally even got to play. Slowly, over the course of the week, patterns began to emerge.

It's kind of a given: If you give game developers faster hardware, they'll build more graphically impressive games. With great horsepower comes great responsibility to make a great first impression, and practically every next-gen game we saw had more compelling visuals than the Xbox 360 or PlayStation 3 equivalent. Mind you, we're not necessarily talking about better art — though that's sometimes true — but often simply the resolution and smoothness.

"the worlds are just bigger, there's more going on, the draw distance is deeper, these are all just subtle things that make your overall experience more believable."

Your HDTV can almost certainly display finely detailed 1080p images at 60 frames a second, but most PlayStation 3 and Xbox 360 games didn't even come close to 1080p. Intensive games like Halo 4 and Heavy Rain ran at 720p or below, and many a title didn't offer antialiasing to smooth out the jagged edges you'd see all around the world.

But at E3 2013, the demos we saw were almost all crisp and smooth. Battlefield 4 publisher Electronic Arts is making a big deal of how its game can run at 60 frames per second on console, and Quantum Break looked unbelievably silky in a quick demonstration. Textures, models, and lighting also looked fantastic, and the insanely detailed virtual automobiles of Forza Motorsport 5 did perhaps the best job of showing that off. The way light and shadow play across the finely textured carbon fiber and glossy painted surfaces of a McLaren P1 is incredible.

The new consoles' power also allows for many more objects and characters on screen at the same time, and the ability to see more of the world at once. Ryse: Son of Rome has you leading an army of detailed soldiers at an enemy fortress, to say nothing of the hordes of walking dead you'll dodge in Dead Rising 3. Pods of dolphins, flocks of birds, and groves of distinct trees populate the Caribbean in Assassin's Creed: Black Flag. Games feel more alive than those from previous generations.

"To see a person disintegrated into a thousand particles and blown away in real time, that's cool and I just haven't seen that before."

As far as the consoles have come in the graphics department, though, PCs are still on top. Games like The Witcher 3 and Splinter Cell: Blacklist looked better on Windows computers than any game we saw running on an alleged Xbox One or PS4. We say "alleged" because even a number of those titles were actually running on PCs, and some of the demos we saw on stage seemed uncannily smooth compared to games we saw actually demoed right in front of us. Either way, it's clear that with the power of a modern dedicated graphics card, you can experience an even crisper, smoother experience on PC than the consoles have shown so far. 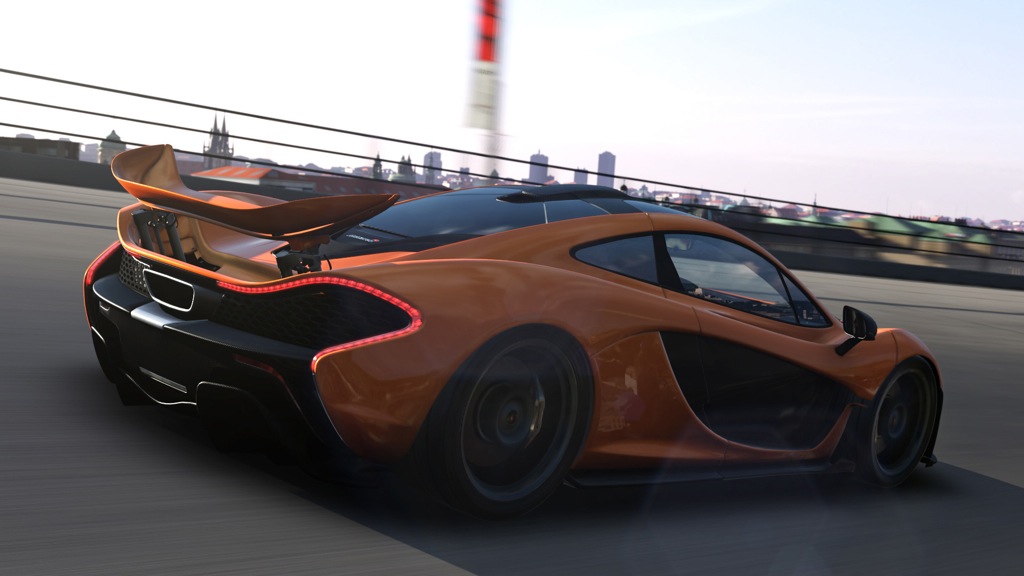 One of the major reasons the graphics seem so great has little to do with graphics at all. We're seeing next-gen game developers embrace physics and other advanced computer simulations of reality in ways that create a feeling of immersion and let you actively influence the world around you. Next-gen sports games in particular look fantastic, now that players can have up to 1,000 animations just for their basic movements, and now that the game recalculates how they should react to other players with every step they take.

"At some level it’s just more tools at the developer’s disposal... it unshackles you a little bit... when you look at all these little touches and add them together, it makes the world more real."

Pete Hines, VP Bethesda Softworks, publisher of The Elder Scrolls Online and The Evil Within

Meanwhile, while you might not to be able to blow up everything in Battlefield 4's multiplayer maps, the single-player experience looks insane. As you battle your way across the leaning deck of a wrecked, sinking aircraft carrier groaning in the midst of an angry sea — water streaming down the deck — you can shoot an exploding barrel to send a F-18 jet careening down into foes, the aircraft aluminum wings and fins bending and deforming as the jet slides into the ocean.

"It's about avoiding repetitions... to make sure it’s not always the same elements that surround you. The next-gen hardware will allow us to do that."

Speaking of oceans, they seem to be a theme: The Witcher 3, Assassin's Creed: Black Flag, and Battlefield 4 all let you navigate stormy seas, and at least the first two games have dynamic weather that actually affects the game. Treacherous simulated waters and forceful winds not only bob your ship, but can smash it into the crags or sweep hapless sailors to their deaths.

On a particularly nasty day in The Witcher 3, even land takes on a different tone. Grasses and even tree branches shake and blow in the wind, giving forests a life of their own. The fur of wolves and other creatures (and their pelts) also undulates realistically in the game, making the creatures feel like a part of those waving woods rather than standing out like sore thumbs they way they often do in previous-gen video games. 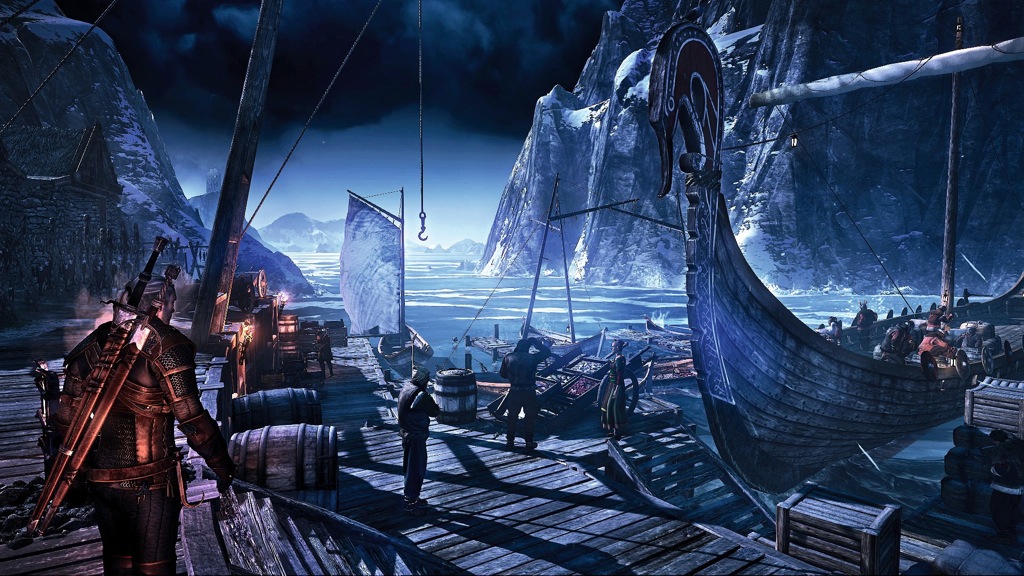 "As soon as you taste it on next-gen, you'll see the difference."

The idea is to inspire a sense of discovery, of adventure, as you navigate seas, explore islands, traverse wastelands, and hack your way (with smartphones, not cleavers) through a presumably dystopian metropolis. Not all of these games necessarily need the power of next-gen consoles to deliver all that content, mind you, as several titles will appear on current-gen as well.

Still, Capcom's Dead Rising 3 promises to make that experience completely seamless on next-gen — no load times — by offloading some calculations to Microsoft's cloud servers. Though Ubisoft says it won't hold back content from current-gen versions of its new games, they'll still be much improved. "As soon as you taste it on next-gen, you'll see the difference," says Assassin's Creed: Black Flag creative director Jean Guesdon. 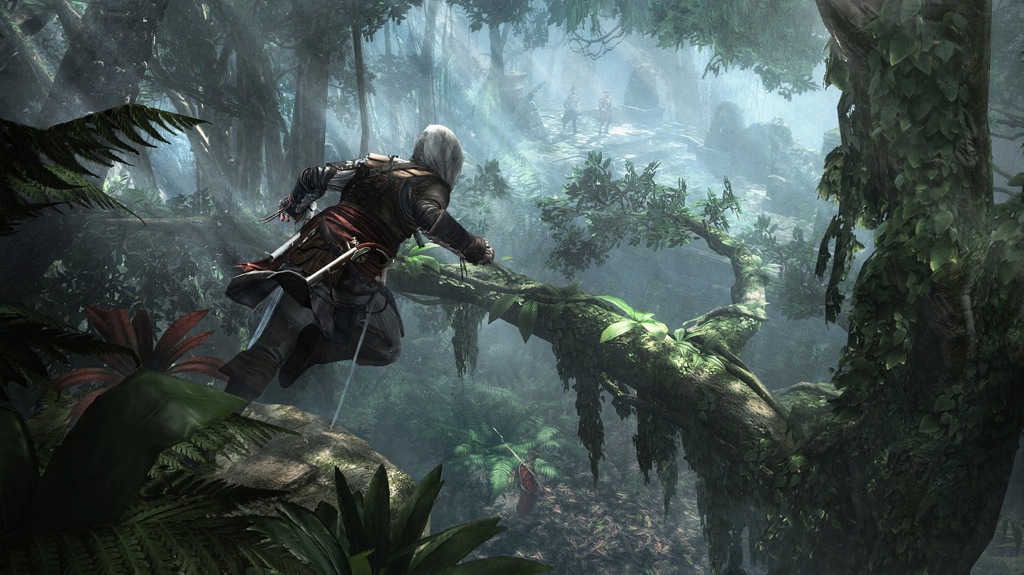 Drop-in, drop-out multiplayer games have been with us since the days of the arcade, but today's games are taking multiplayer one step further and integrating it into the single-player experience. We've seen what games like Journey and Dark Souls can be like when players can become spirits that invade your world, but now games like Watch Dogs and Need for Speed: Rivals are taking the idea corporeal.

"It's new game dynamics. We've played a lot of games, and next-gen just isn't an opportunity for us to improve graphics."

In Watch Dogs you can secretly enter other players' games, attempt to hack them for personal gain, then escape without being killed. From your own perspective each of you is still protagonist Aiden Pierce, each playing your own game, but the resulting encounter is driven by real human interaction rather than artificial intelligence. "We want to break this single-player / multiplayer wall," says lead game designer Danny Belanger.

Need for Speed: Rivals applies a similar idea to cop vs. street racer chases: If you're playing a racer and another player is playing a cop, each of you in a single-player game, the network can seamlessly merge the two sessions to give each of you a human opponent.

"To me, a next gen game is something that brings completely new to the table. A next gen game should take a risk... It's about taking that next generation hardware and doing some crazy insane shit."

Meanwhile, Forza 5 and the epic shooter Titanfall are taking a different tack, subbing in artificial intelligence for real players. Titanfall appears to play like a giant multiplayer battle — think Call of Duty meets Halo and Mechwarrior — where giant exosuits and their jumpjet-equipped pilot commandos battle over border worlds with incredibly destructive weaponry. But your team can be composed of AI, not just players... and as that team succeeds or fails, it affects the game's narrative. With Forza 5, every time you race you're teaching a cloud-based artificial intelligence — a "driveatar" — how to drive a virtual car. Those drivetars become the opponents for everyone who plays Forza, instead of the traditional AI, so theoretically it should feel like every virtual car has a real human at the wheel. 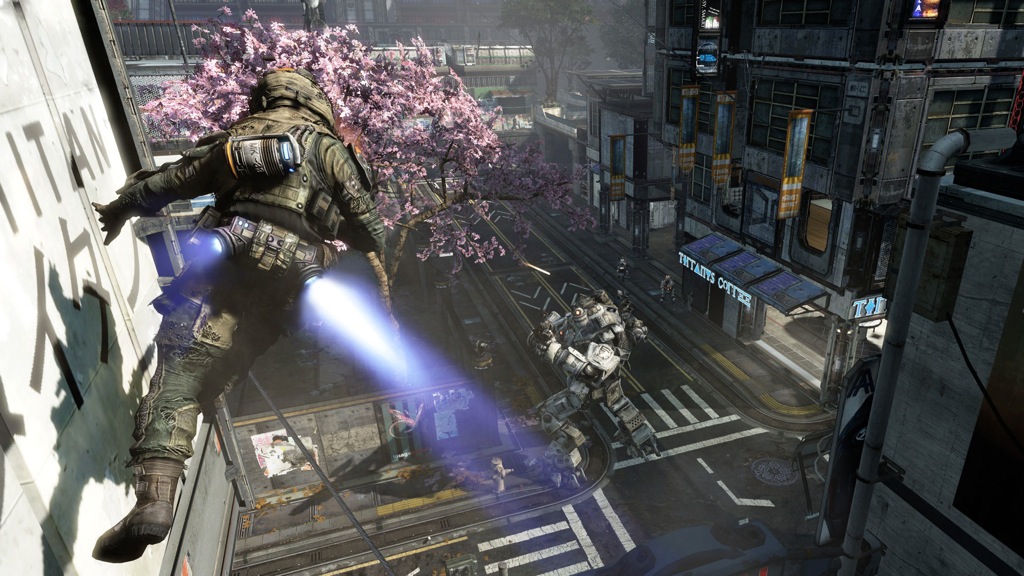 Last but not least, we saw constant examples of how developers intend to embrace tablets and smartphones in their latest games. Project Spark lets you build entire worlds with the tablet, using your fingers to carve and craft. In Watch Dogs, Need for Speed: Rivals, and The Division, you can use your mobile device to monitor and assist your friends, while Assassin's Creed: Black Flag uses the device as a sort of GPS for your ship, providing a map with your current position, allowing you to place markers and send your assassin recruits on missions.

Battlefield 4's tablet integration might be the most ambitious, though. With an iPad or Android tablet, you'll command an entire 32-player army, issuing orders, scanning the map for threats, dropping supplies and even launching cruise missile strikes. "We felt this was a natural thing to bring to a second screen device," says DICE studio boss Karl Magnus-Trodesson, hinting at even more functionality for the tablet app in the near future. 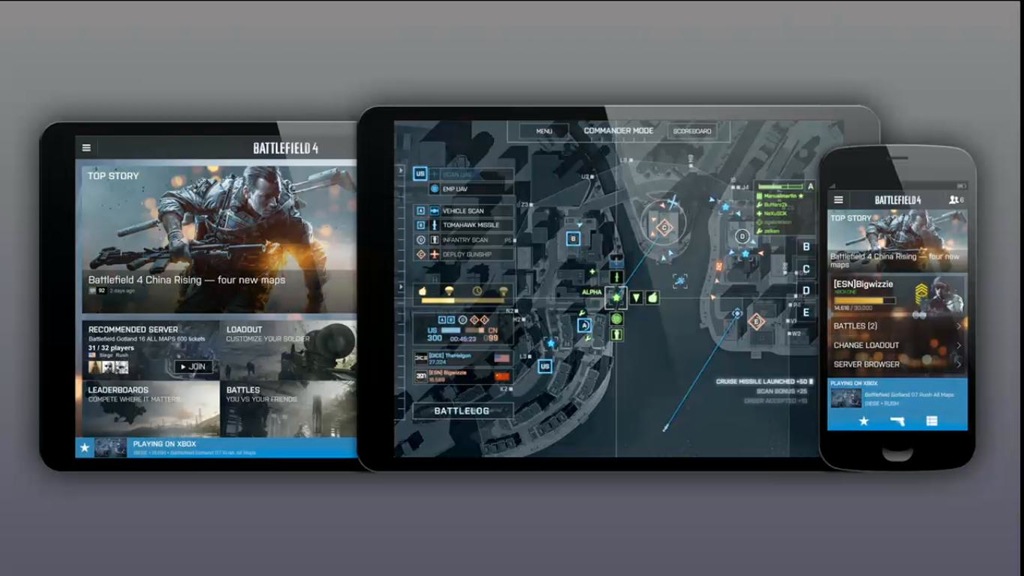 We're just scratching the surfaces of what the next generation has to offer, assuming we're even seeing true next-gen games at all. As some developers from EA and Ubisoft admitted, we're really still in a transitional period between the console generations. Many of the games we're seeing here at E3 2013 were conceived before PS4 and Xbox One specs were even finalized, to say nothing of working with the actual controllers and development kits. Many of the games we did manage to see are far from complete, and most developers guided us through carefully scripted demos rather than allowing us to play.

"We have no more excuse to say 'I had a vision but the technology was not ready.'"

Though many games looked great and felt advanced since the last console generation, that doesn't mean we've reached anything near perfection yet. For example, as beautiful as the next generation of virtual cars look, their tires still don't realistically cling to the track.

Character animation still leaves a lot to be desired: Despite the amount of motion capture video game studios are doing these days, video game characters still look much better standing still than when they're talking or moving. We haven't really seen what's possible with motion gaming here at E3. And if the best we can offer today in the way of freedom is the freedom to hack or kill whoever you choose and (a la The Witcher) experience a limited number of branching story paths, we've got a long way to go yet.

The next generation of consoles won't magically make games more compelling than they were before. It's a step forward, for certain. Now it's up to developers to build experiences worthy of the "next-gen" moniker.