Capy, Media Molecule, and others take the stage at the Museum of Contemporary Art

E3 is loud. Whether you're in a press conference or on the show floor, the audiovisual spectacle is overwhelming. You can barely hear the games you're playing, let alone enjoy them. Announcements at press conferences are drowned out in noise — music, laughter, cheers, and oh so many hoots and hollers.

Horizon was different. Billed as "an alternative press conference showcasing a lineup of incredibly beautiful games," the event was tucked away in the basement of the Museum of Contemporary Art, far away from the bright lights and booming bass of the Los Angeles Convention Center. There, a number of developers spent about an hour talking about their games, and what it was about them that made them so excited. It was a chance for smaller studios — and in some cases one-man teams — to step into the spotlight. And it was incredibly refreshing.

Far away from the bright lights and booming bass

"The idea for Horizon came almost exactly one year ago," explained Brandon Boyer, chairman of the Independent Games Festival, "when my friend Cory Schmitz and I wondered aloud what it would be like to hold our own press conference that was dedicated entirely to the kinds of games that get us excited to be working in this field." The games on display weren't entirely divorced from E3, as several were a part of the event itself. Below, the latest collaboration from Super Time Force developer Capy Games and Sword & Sworcery composer Jim Guthrie, was announced at Microsoft's green glowing Xbox One event, for example. Meanwhile, both stylish experimental action game Hohokrum and Sportsfriends, a collection of local multiplayer games, are headed to Sony platforms. Xbox and PlayStation logos were a common sight at Horizon.

If anything, the event was an example of just how big indie games have become: They can steal some time at the big press conferences, as well as headline their own. Horizon was less about the scrappy underdog, though, than it was about highlighting aspects of games that are often underrepresented at the big trade shows. It's no coincidence that the event was held at the MOCA.

"We were looking at all sorts of creative fields which weren't necessarily getting the exposure that would mean a conventional museum exhibition," said Emma Reeves, creative director for the MOCAtv YouTube channel, which will be airing a new series on games later this year. "Being here in Los Angeles, on the West Coast, we started to see that there was so much creativity in the indie video game community."

The lineup was diverse. Double Fine's gorgeous Kickstarted adventure game Broken Age started off the event (sadly, the recently revealed strategy title Massive Chalice wasn't on display), while Die Gute Fabrik revealed Mutazione, a dark, moody adventure game inspired by classics like Another World and The Legend of Zelda: Majora's Mask. Mutazione takes place in a strange city filled with mutants, and the world changes depending on the time of day.

It wasn't just the games being shown at Horizon that were unique, though — it was the way they were presented.

Rex Crowle, from LittleBigPlanet developer Media Molecule, didn't focus on the typical bullet points. "Because this conference is a little different," he explained, "we thought we'd go for a slightly different approach. Instead of showing epic huge things, I wanted the chance to show really tiny things." For Media Molecule's upcoming papercraft-themed Vita game Tearaway, that meant elements like swaying blades of grass, splashing puddles, and bridges that bounce when you walk across them. "These are the elements that I think are really beautiful," Crowle said.

"These are the elements that I think are really beautiful."

When presenting Hohokum, developer Ricky Haggett and artist Richard Hogg barely discussed the game at all, instead focusing on what excited them the most: the music. With a little help from Sony, Hohokum will feature a soundtrack composed entirely by artists from indie record label Ghostly International, and the parts I heard sounded great. The presentation for Little Flag's "whimsical physics toy" Kachina was simply an exploration of the game's mechanics — Kachina is essentially a reverse Katamari, where players create a hole in the ground to gobble up objects in the environment, which in turn makes the hole even bigger so that you can suck up larger and larger objects. 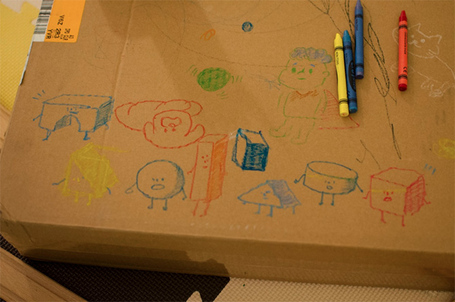 That's not to say that Horizon was devoid of big new announcements — the show ended with a brief, minimalist teaser for Fez 2 — but the vibe was much different than what was on display earlier in the week when Microsoft, Sony, Ubisoft, and Electronic Arts held their lavish press conferences. It felt less like someone trying to sell you something, and more like a bunch of interesting people telling you about cool things they're excited about. The games were very different from one another, but they all shared two common characteristics: passionate creators and the fact that I wanted to play them all as soon as I saw them. Horizon presented games as important creative endeavors, as opposed to expensive consumer products.

When Katamari creator Keita Takahashi and Journey producer Robin Hunicke took the stage to reveal they were collaborating on a new game, it was exciting even though we learned nothing about the game itself. Instead, Hunicke talked about how they ended up working together, while Takahashi briefly explained his inspirations for the mystery title. "My new game idea came from when I played with my son," he explained. "I [previously] made a game about prince and king, then about boy and girl, and this time I'm making a game about mayors and deputies." And that was about it; he spoke for maybe two minutes, and I'm more excited about it than anything Microsoft announced in a basketball arena.