A number of screenshots showing what iOS 7 will look like on the iPad have been leaked by Twitter user Sonny Dickson. The images, which were obtained using the simulator feature of Apple's XCode developer platform, don't throw up too many surprises. The design mimics what we've seen of iOS 7 so far, with a refreshed icon set, new core apps, and the addition of a Control Center that's accessible with a swipe up from the bottom of the screen.

The leaked images do reveal a couple of unexpected changes — assuming Apple doesn't make any drastic interface changes before iOS 7 is released. The redesigned Notification Center now takes up the entire screen (just as it does on the iPhone), rather than a small portion of the screen as in iOS 5 and 6. The Control Center, which Apple didn't demo for iPad at its WWDC keynote, is confined to a slice at the bottom of the display — the iPhone version covers more than half of the screen. Other changes revealed include sparser Maps, Contacts, Spotlight search, and Settings interfaces. There is the possibility that Apple just doesn't have the iPad layout nailed down yet, and the simulator is simply stretching the iPhone layout in places, which would explain the appearance of a "flashlight" function in Control Center. 9to5Mac is hosting a set of screenshots from the simulator, which also show a rearranged version of Safari. 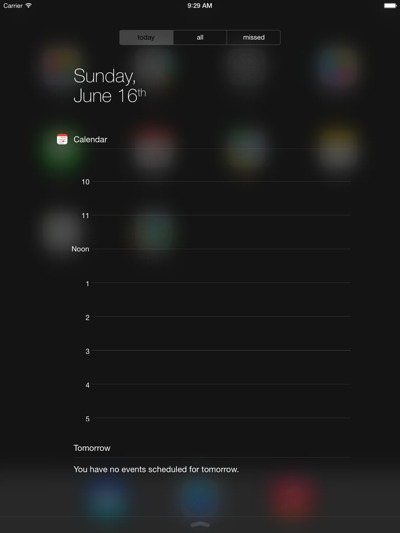 The screenshots also highlight one of the reasons that Apple hasn't released a beta version of iOS 7 for iPad. Some of the interface elements, such as the Control Center media controls, overlap, while icons such as Calendar are completely different to their iPhone counterparts. We expect to see many more iPad interface leaks as Apple continues to refine the OS in the lead up to its fall release, so stay tuned.