Huawei's design keeps on getting better, but will consumers care?

Huawei is in London today launching its new smartphone, the Ascend P6. The first thing you'll notice about the P6 is it's incredibly thin — Huawei says it's 6.18mm thick, which is far thinner than Apple's iPhone 5 or the Samsung Galaxy S4. Huawei also claims it's the "world's thinnest" smartphone, but as is often the case with such titles, that achievement is set to be eclipsed by another Chinese competitor soon. The Ascend P6 is pretty light: at 120g, it weighs 10g less than the Galaxy S4. Despite its small shell, Huawei has managed to squeeze in what are essentially the internals of the LG Nexus 4. There's a 4.7-inch 1280 x 720 LCD with in-cell touch, an unspecified 1.5GHz quad-core processor, 2GB of RAM, a 2000mAh battery, and 8GB of internal storage (expandable via a microSD card slot).

Compared to Huawei products we've seen in the past, the Ascend P6 is definitely a step up in quality. Available in black, white, or pink, it's constructed mostly from plastic and doesn't feel cheap, but it's not exactly premium either. The sides are made from aluminum and have an antenna notch that'll be familiar to anyone that's seen an iPhone in the past three years. One odd facet of the design is the corners, which are rounded much like most smartphones at the top, but at the bottom curve round to meet the back of the phone. It's an strange design decision — the two styles don't work particularly well together in my opinion. Another niggling aspect of the design are the device's power and volume controls: they're a little too shallow, and there's no comforting "click" when you press them. Apart from that, everything seems well put together, and the display is good enough — it looks almost identical to the Nexus 4's screen. 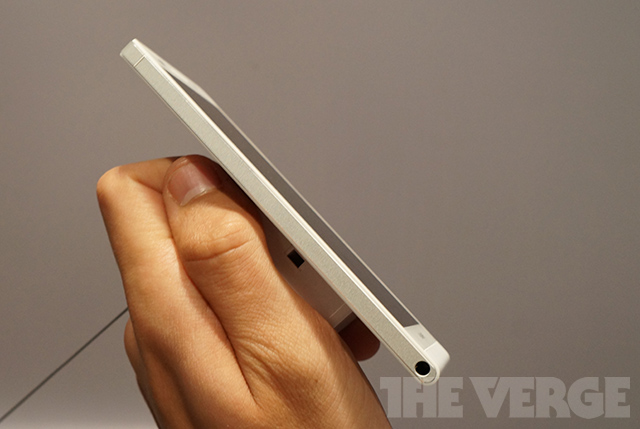 Huawei is making noise about the P6's photographic abilities. The rear-facing camera has a backside-illuminated 8-megapixel sensor and an f/2.0 lens. Huawei says the camera can shoot close up photos from as little as 4cm (about 1.5 inches) away. Its front-facing camera is also pretty special, on paper at least: it's a 5-megapixel unit, far higher than most smartphones. Huawei has equipped the front-facing camera with "Auto Face Enhancement," which comes with a "beauty level" slider that can apparently make you more attractive in your self portraits. When I tried it out, all it seemed to do was blur my face slightly and make my cheeks a little more red. 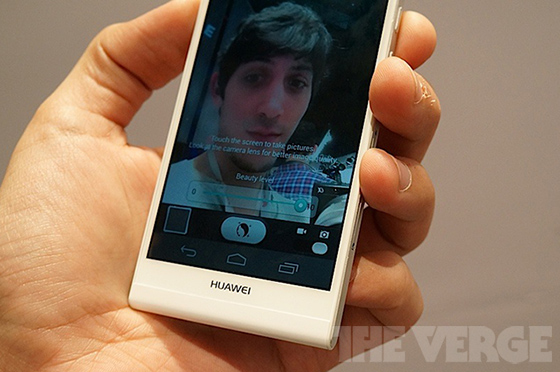 We took a few quick shots with the P6 and found the camera to be fairly capable. It definitely can't compete with Nokia's Lumia 920, and falls short of the iPhone 5 and HTC One, but from my brief time with it I could see myself using it regularly without too much issue. The same can't be said for Huawei's Android skin, unfortunately. Called the "Emotion UI," it's based on the latest version of Android, 4.2.2, but it's a pretty heavy skin that feels like an attempt to ape Samsung's love-it-or-hate-it interpretation of Google's OS. 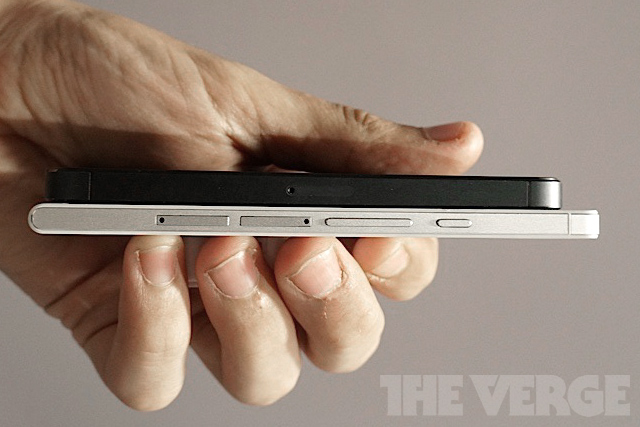 There are a few good ideas in the skin, though, not least of which are granular controls over notifications and data access. Much like iOS' centralized settings for Notification Center, you can stop any app from creating notifications, and you can also prevent apps from using your mobile data. Another thing the skin has over HTC's and Samsung's efforts is the inclusion of on-screen buttons, so at least there won't be any irritating on-screen menu prompts within apps. 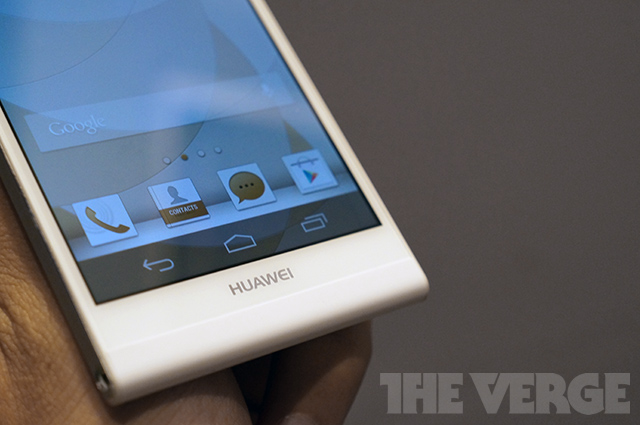 Huawei believes that its smartphone's quality, combined with a comparatively low price tag, will be enough to overcome its competitors' marketing budgets. The Ascend P6 isn't likely to ever make it to the US anytime soon as it doesn't have LTE connectivity built in — Huawei says an LTE version will come this fall. It's planning to launch the phone in the UK, mainland Europe, and Australia shortly, expanding to 100 countries by the end of the year. It'll be priced at €449 ($600) without a contract, which is quite a bit cheaper than most "flagship" products.