Last month, Adobe dropped a bombshell on users of its Creative Suite apps: going forward, all of its apps — from Photoshop and Illustrator to Dreamweaver and After Effects — would fall under the umbrella of Creative Cloud, its monthly subscription service. While the decision has been divisive, one thing is clear: if you want new Photoshop features, Creative Cloud is your only way in. Today, Adobe is unveiling all of the updated apps it announced in May, and we took the opportunity to look at what separates Photoshop CC from its CS6 predecessor.

There are limits to what you can accomplish with Shake Reduction

From a photographer’s perspective, the headline feature this time around is Shake Reduction, which does exactly what you’d expect. First premiered at Adobe Max 2011, it lets you give Photoshop a shaky image and have it try to figure out the blur pattern, (ideally) returning you a nice, clear image. I tried using it on a really bad pan that I shot at 1/10 of a second and a handheld still shot at 1/5 (click images to see at full resolution, originals are on the left) and immediately discovered my 2012 MacBook Air isn’t the ideal machine for the job. Photoshop filters can be resource intensive, but this took over two minutes to render a full preview of a 24-megapixel image. It's a nice addition, but it's clear that there are limits to what you can accomplish with Shake Reduction. I didn’t get the sharp, natural results I was hoping for with my own images, but as you’d expect, results are best when there’s little camera shake to account for. 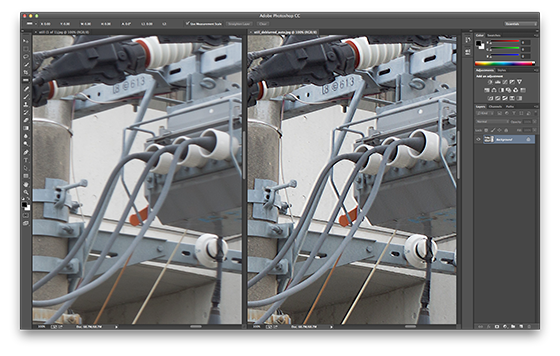 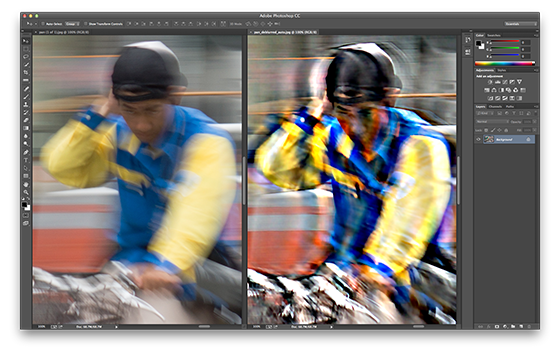 Smart Sharpen now figures out where your subject is

Speaking of sharpness, an improved Smart Sharpen now figures out where your subject is, applying sharpening selectively while leaving background textures soft. Zooming in on the precise areas you want to sharpen in the preview window lets you make sure that you’re only getting those sharp edges where you really want them. Of course, you could achieve similar results with layers and masking in previous versions of Photoshop, but it’s nice to have a fast, automated alternative.

Another notable addition in Photoshop CC is improved enlargements. For going really big, pros typically turn to dedicated solutions like Perfect Resize (formerly Genuine Fractals), but with Photoshop CC, Adobe is saying you can use its new intelligent upsampling algorithm to "enlarge a lo-res image for print, or start with a larger image and blow it up for use on a poster or billboard." A frequent problem we run into at The Verge is upscaling a smaller 640-pixel image to a 2040-pixel one for high-res displays, so I was eager to see what kinds of results it produced. Unfortunately, at that scale, the difference between the two enlargement algorithms looks negligible, even when zoomed in to 100 percent. Bigger enlargements could have more pronounced results. (Click below to see at full resolution, enlargements with intelligent upsampling on the right). 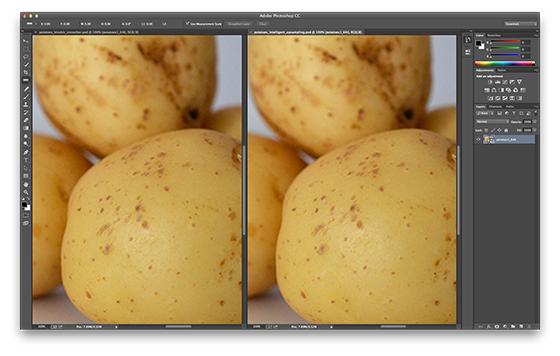 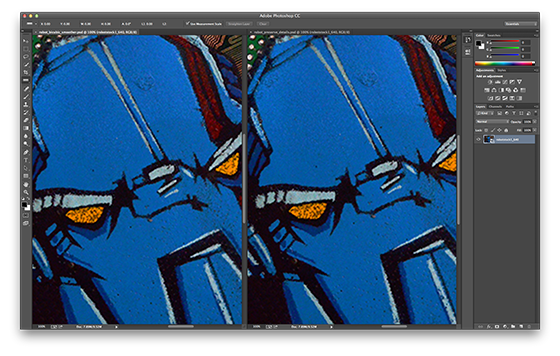 Lastly, Adobe Camera Raw 8 is getting some of the new editing features that were made available in Lightroom 5 — radial filters, straightening of distorted photos, and a new, non-destructive healing brush. These appear largely the same as their Lightroom counterparts, although there are some slight interface differences.

Much ado has been made about Adobe's decision to make its new products subscription-only, but the company is jumping through a lot of hoops to make Creative Cloud as affordable as possible. The monthly subscription ordinarily costs $49.99, but you can get access to single apps for $19.99, and that goes down to $9.99 if you’re an owner of CS3 or later. And that could get more aggressive still. Photo Rumors is reporting that Adobe has been circulating a survey asking if people would be willing to pay $9.99 a month just for Photoshop or $29.99 for the entire suite if it meant they would get a copy of CS6 at the end of three years and a commitment from Adobe to keep supporting future cameras and file formats, although it could just be testing the waters.

So is it worth making the switch? Photoshop CC adds a couple of useful features to Adobe’s flagship application, but it isn’t making a really compelling case for existing Photoshop CS6 users to make the subscription jump. Of course, the full benefits of Creative Cloud stretch far beyond Photoshop, and for professionals that use multiple Adobe apps, need the document syncing and sharing features, need to manage teams and large projects, or just want access to new features going forward, it offers a much different value proposition. If you want to see the new bells and whistles in Photoshop CC for yourself, Adobe offers a 30-day free trial that lets you check out the whole Creative Cloud experience.