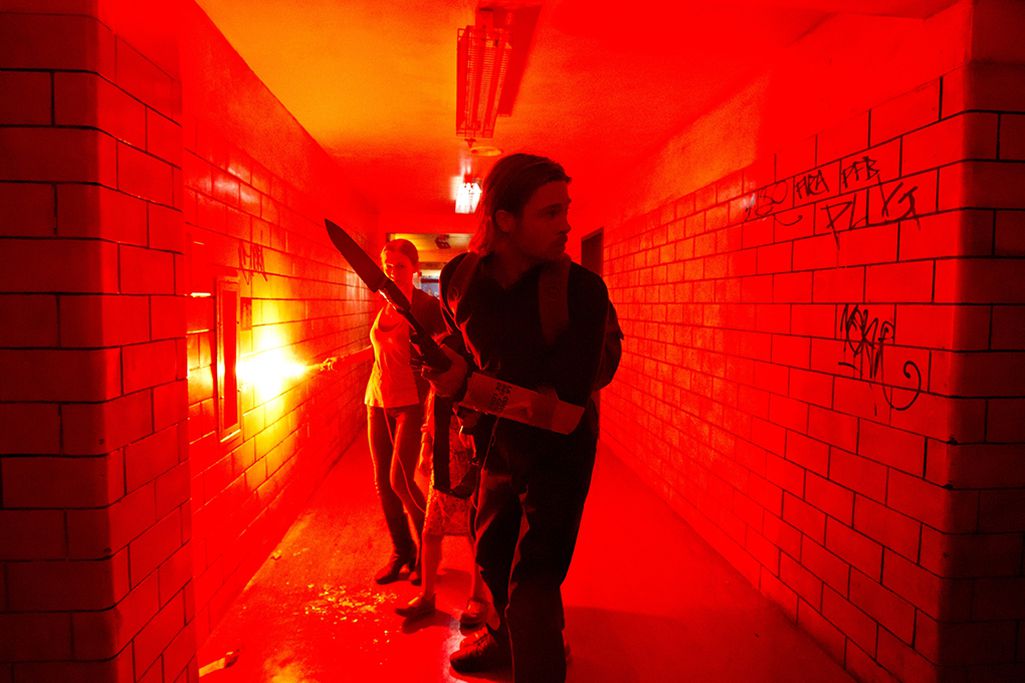 Sometimes a movie surprises you. Something you thought was going to be a mid-summer slog or an underwhelming riff on familiar themes turns out to be something more. Familiar tropes are reinvented, a tired villain gets new life, and presumed lines of safety are crossed. You find yourself in the middle of a relentless rush of anxiety, fear, and exhilaration, and when you walk out of the theater you can’t wait to tell someone what you just witnessed.

World War Z is that kind of movie.

The adaptation of Max Brooks’ best-seller has been best known up until this point for its production problems. Last year Paramount delayed the film’s original 2012 release date to allow for extensive reshoots. Much of the blame was laid at the feet of director Marc Forster (Quantum of Solace, Monster's Ball) and a script that hadn’t been ready to shoot. Writers like Damon Lindelof and Cloverfield’s Drew Goddard were brought in to completely rework the film’s third act in an effort to salvage the big-budget tentpole from disaster.

The finished film starts off by mercilessly throwing the audience into the deep end of the zombie apocalypse. There’s a brief scene where Brad Pitt’s Gerry Lane makes breakfast for his wife Karin (Mireille Enos from The Killing) and their two daughters. Then the family find themselves stuck in city traffic and all hell breaks loose. Explosions strike, fast-moving zombies swarm, and everybody starts running for their lives.

A former investigator for the United Nations, Gerry is able to get his family to safety on an aircraft carrier with the help of his colleague Thierry (Fana Mokoena). Whatever struck the world struck fast, Gerry learns — the president of the United States is already dead — and with the entire globe infected the only hope is to find Patient Zero. "Mother Nature is a serial killer," a UN doctor tells Gerry, but she does leave clues behind. To ensure his family stays safely aboard the ship, Gerry agrees to lead the investigation into the origins of the plague.

It’s such a quick progression of events it makes your head spin. In fact, it’s almost too fast; at a certain point, it feels like somebody left out the requisite moment when everybody looks around and wonders just what these crazy zombie creatures actually are. But by then the movie is already off to its next action set piece. 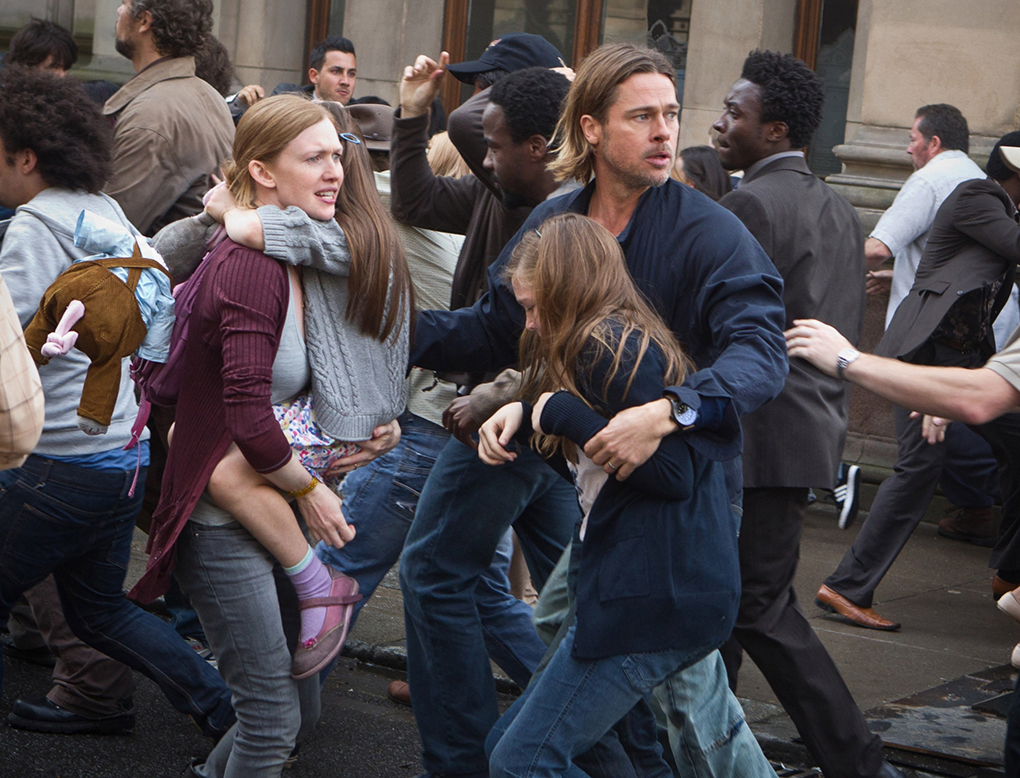 The movie throws US into the deep end of the apocalypse 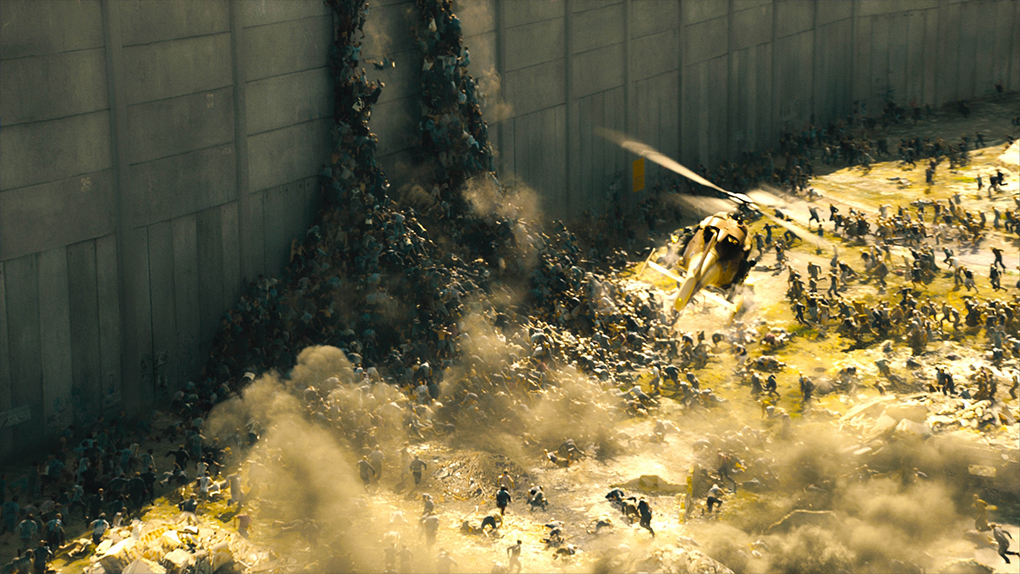 The zombies from 'The Walking Dead' look cuddly in comparison 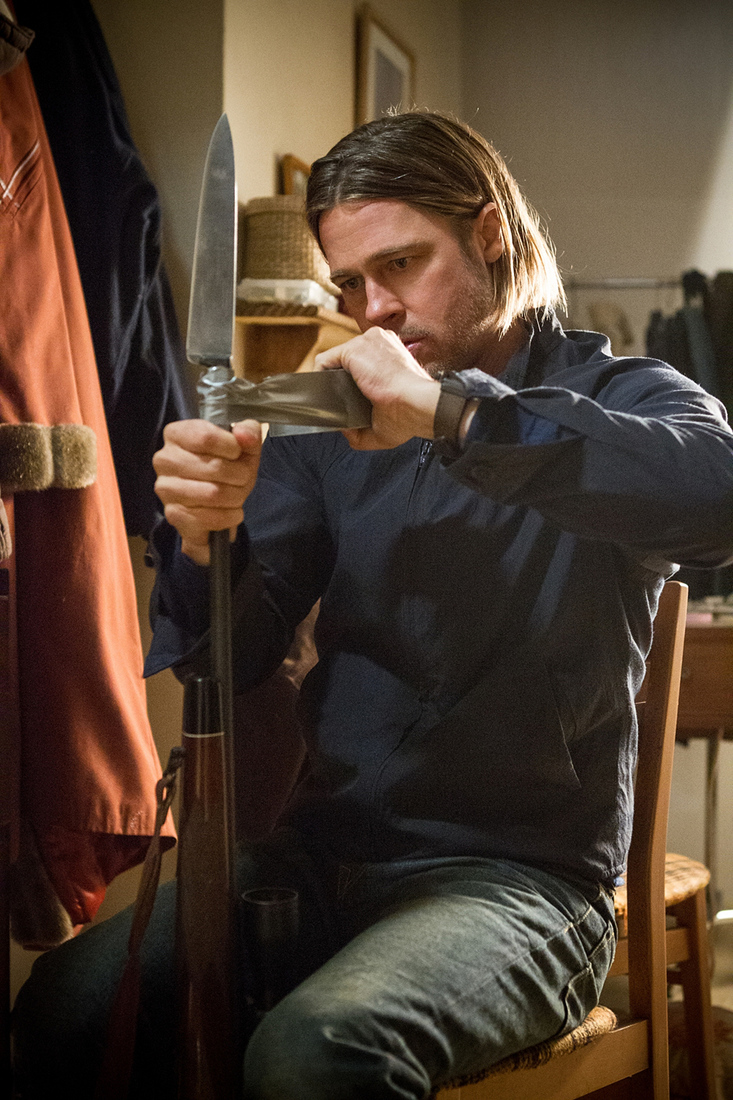 And what set pieces they are. World War Z is a string of unrelenting, harrowing sequences that continually manage to top one another — spanning multiple countries, the ground, and air. When attacking en masse the zombies are an overwhelming tidal wave; one-on-one they’re a vicious mix of tics and snarls. Imagine the undead from 28 Days Later, make them twice as fast, and combine them with the swarming fury of fire ants and you’ll get an idea of World War Z’s creatures. They make the zombies from The Walking Dead look positively cuddly in comparison: lightning-fast biters straight from the subconscious that simply do not stop.

The movie shouldn’t be confused for a Romero-style zombie flick, however. World War Z is a disaster film in the classic 1970s sense — think The Towering Inferno or The Poseidon Adventure — serving as light allegory for our indifference towards nature while also bringing a lot of smarts to the table. Early on, Gerry gets zombie blood in his mouth and runs to the edge of a building, realizing he may have to throw himself off should he transform. He clocks the 12 seconds it takes for people to turn upon witnessing his first transformation, putting the pieces of the puzzle together quicker than what we’re used to seeing.

Pitt carries the entire movie, as both its star and emotional core. Gerry’s mission is simple and basic — he wants to keep his family safe — and when he says goodbye to his daughters you believe it. Forster thankfully takes the time to focus on these small character moments, which could otherwise get lost in the face of the film’s larger sequences. Gerry’s wife Enos isn’t given much to do other than furrow her brow and stare at a satellite phone, but together the pair provide just enough of an emotional hook for the story to work. 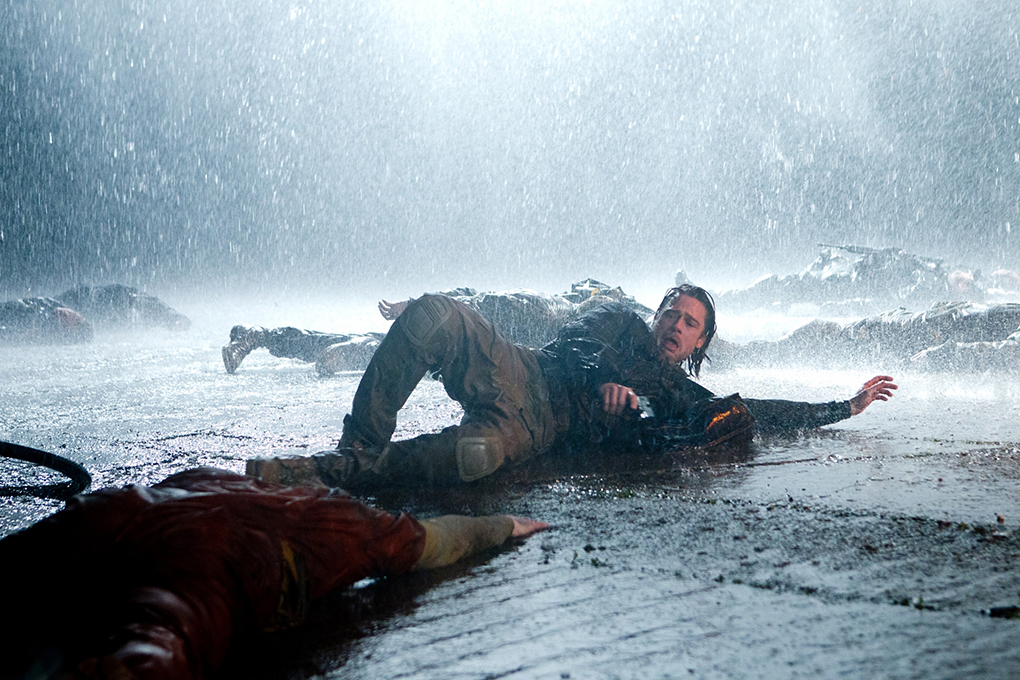 Despite its strengths, World War Z does bear the scars of its troubled past. There’s a slight, but noticeable, bump when the film shifts into its third act, and Forster still has real problems with action sequences — something he demonstrated all too plainly in Quantum of Solace. The film’s 3D effects make the shaky cam close-ups that much worse, and are indicative of the larger 3D issues the film suffers from. Rather than opting for the subtle depth movies like Star Trek Into Darkness and Iron Man 3 have turned to, World War Z’s 3D is as aggressive as its zombies, and simply doesn’t mesh with Forster’s layered frames and use of depth of field. That said, the director creates some unbearable tension in the film, and he knows exactly when to give the audience a gulp of relief or a well-placed laugh.

Its 3D effects are as aggressive as its zombies

The film’s ending also feels like it’s missing one final note. It certainly works, but given the emphasis on family and Gerry’s emotional drive it’s hard to escape the feeling that it could have gone just a touch further. It’s as if Forster and his creative team were able to get the ball to the 1-yard line, but couldn’t quite punch it into the endzone. Of course, with so many summer movies fumbling at the 40 it’s a mild complaint.

There’s tremendous joy in watching a movie like World War Z that just works. Too many films this year have seemed more concerned with showing the audience how clever they are — either though misdirection, callbacks, or faux gravitas — instead of just telling good stories. In that sense, World War Z is practically a revelation: a smart film that’s able to deliver on its promise, no matter how many problems it encountered along the way. It’s an unnerving journey that will have you holding your breath… and what a wonderful surprise that is.

World War Z opens in the U.S. on June 21st. To discuss the film further — spoilers and all — join our conversation in the forums!
Back to top ^