Shopping for drones in Paris

Share All sharing options for: Shopping for drones in Paris

Project Zero, an all-electric UAV from AugustaWestland, on display at the 2013 Paris Air Show

It’s the second day of the Paris Air Show, and the sun is brutal. Most people gathered outside have their heads tilted skyward, where fighter jets and World War II-era cargo planes take turns performing stunts both balletic and violent. But along the outskirts of the sprawling Le Bourget complex, the focus is more earthbound.

Here, representatives from the government-owned Israel Aerospace Industries (IAI) have set up a mini compound displaying their most prized innovations in warfare and defense: missiles, surface-to-air launchers, and, most prominently, the Heron unmanned aerial vehicle (UAV). The hulking gray drone carries an ominous presence, its 54-foot wingspan covering the length of IAI’s outdoor exhibit. It's an unmitigated killing machine, replete with multiple payloads and an array of sensors, and it's greeted with a strange mix of awe and excitement.

As an orchestral cover of ABBA's "Dancing Queen" blares from IAI’s speakers, a middle-aged woman rushes over to the Heron and poses for a picture. A few minutes later, an adolescent boy does the same, holding up a peace sign and flashing a wide grin.

Drones were everywhere, but nobody wanted to talk about them

To an outsider, such drone enthusiasm may seem strange, considering the ongoing debates over privacy and military policy. At this year's Air Show, though, UAVs were unabashedly heralded as the bright future of warfare and surveillance, with exhibitors cheerfully touting their machines as one step closer to full autonomy.

For 50 years, industry leaders and military brass have gathered here at Le Bourget to announce deals, showcase new planes, and network over champagne and macaroons. It’s not clear how many deals actually materialize during the show, if any at all. Executives I spoke with say their primary focus this week is on marketing and mingling rather than direct negotiations, though the UAV exhibits I visited certainly drew a wide range of attendees: curious students, moustached military leaders, and retired pilots dressed in tight-fitting white uniforms.

Some attendees would engage in long conversations with company executives, occasionally taking their discussions to back rooms with stocked bars and complicated hors d'oeuvres. None were willing to speak with me after emerging. UAV companies were particularly guarded as well. At one point, security keeping watch over the Israeli government compound told me to leave the area because they thought I looked suspicious standing alone and staring at my phone.

It's not surprising that industry insiders would play their cards so close to the chest. Most private-sector deals are signed under non-disclosure agreements, and several people immediately started walking away as soon as they saw my press badge. But it does underscore a curious duality to this year’s show — and, perhaps, to attitudes toward UAVs in general. Drones were everywhere, but only a few people wanted to talk about them.

"The key to UAVs is in the 'U'," says Ricardo Mendes, chief operations officer at Tekever, a Portugal-based UAV maker. This year, Tekever displayed new variants of its Air Ray UAVs, including the AR4 Light Ray — a small surveillance drone that was deployed earlier this year to support an anti-guerilla operation in Colombia. 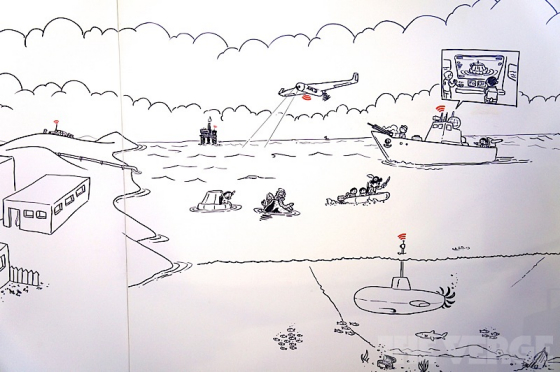 "From a public perception point of view, people may be concerned about [more autonomous drones]," he says. "But the fact is that more and more are coming, and they're becoming more intelligent."

By Paris Air Show standards, Tekever’s indoor booth is relatively austere. Its Air Ray drones hang suspended from the ceiling as a promotional video plays on loop on a wall-mounted monitor. The video's heavy rock soundtrack sounds like it could have been lifted from a pickup truck commercial, and it contrasts sharply with an adjoining wall, on which Tekever has drawn a cartoon-like schema of how its unmanned aerial systems could be used. It involved pirates and mermaids.

a cross between a spaceship and a pair of Air Jordans

Chief project engineer Luigi Moretti says there are currently no plans to deploy the aircraft, describing it as a "platform for technology" rather than a product, though Project Zero certainly cuts a striking figure. With its tilting propellers and red-black color scheme, it looks like a cross between a spaceship and a pair of Air Jordans.

Its bold design attracted plenty of onlookers, though Moretti acknowledges that it will be some time before we see a fully operational, all-electric drone. More generally, he cites regulatory hurdles as the biggest threat to wide-scale UAV deployment, particularly in the private sector. 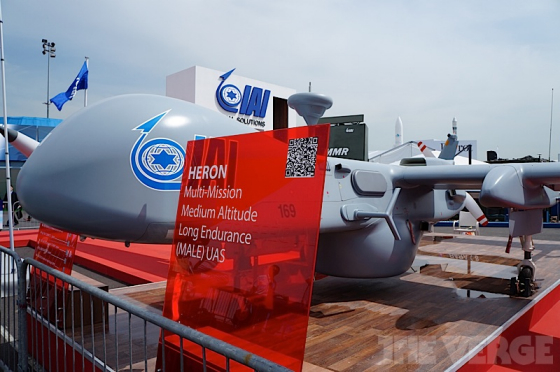 Israel's Heron UAV was a popular photo op for passersby

Although the FAA has taken steps to allow drone test flights in US airspace, regulators have yet to implement a comprehensive certification program for manufacturers within the European Union. The defense industry has called on EU leaders to create a UAV program, with Moretti and others saying there should be a similar framework for private sector operators, as well.

"Drones don't fall into any one category under current certification codes," says Charles Leboeuf, project certification manager at the European Aviation Safety Agency. "How do you classify it? Should it be considered like a small airplane, or is it altogether something else?"

Most companies I spoke with at Le Bourget said their UAV business remains dominated by governments and law enforcement agencies, though commercial business is on the rise. Tekever, for one, has already struck deals with some oil companies looking to conduct surveillance and inspections on rigs, and many expect the private sector to boom once firm standards and certifications are put in place.

Winning over public opinion may prove more difficult. Company representatives acknowledge that privacy concerns loom large over the industry, though they remain confident that those will be outweighed by the benefits drones offer to security and law enforcement.

"It's my personal belief that restricting the use of UAVs on the basis of privacy won't change anything if governments or anyone else wants to impinge on it," Moretti says. "It's a tool — it can be used in good ways, or bad ways."

When it comes to warfare, at least, officials seem convinced that drones can only do good. Despite the United Nations’ call for a moratorium on "killer robots," those displaying their wares at this week's Air Show insist that automated war is all but inevitable — and ultimately beneficial. To IAI and other defense firms, the equation is straightforward: more intelligent drones mean fewer lives put at risk, at least for the aggressor.

Before leaving the IAI compound, I ask a representative about what this may mean for warfare and international relations going forward. Is the Israeli government banking on a future where wars are carried out by swarms of drone armies, completely divorced from human operators? Should executing attacks be as simple as the press of a button?

He smiles, looks off into the distance, and declines to comment.