We already know what ARM has planned for 2014's high-end smartphones, but what about cheaper handsets? The company is preparing new mid-range silicon that it believes can offer increased performance in phones which could cost as little as $200 off-contract. The new Cortex-A12 core will offer 40 percent more performance as the existing Cortex-A9 which appears in chips like today's Tegra 3, though it won't be quite up to the standard set by the Cortex-A15 you'll find in devices that have Samsung's Exynos 5250 or Nvidia's Tegra 4, to say nothing of next year's Cortex-A57 based chips.

However, it will be able to be paired with the even smaller Cortex-A7 in ARM's big.LITTLE configuration, which basically allows it to tag-team with the lower-power chip: the phone can use the A12 when it needs power, then switch to the A7 to increase battery life whenever it's able. 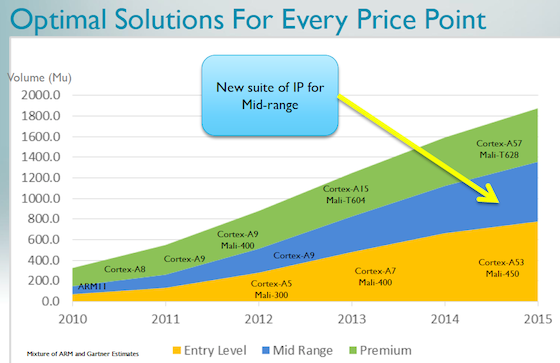 You can also optionally pair it with the brand-new Mali-T622 graphics processor and Mali-V500 encoder and decoder that ARM's also announcing today. The former supports both GPU computing and OpenGL ES 3.0 for 3D applications, and offers battery life optimizations, though it's not the most powerful mobile GPU on the block. Like the A12, it's designed to be a midrange solution. The Mali-V500 can work with 4K video at up to 120 frames per second if you have enough processing cores, and ARM hopes its content protection features will help device manufacturers get permission to stream video content to their devices.

Though the A12 and T622 aren't the flashiest new cores on the block, ARM believes that they'll make a real splash in the mobile marketplace. ARM's Chris Porthouse told The Verge that demand for mid-range and entry-level handsets will soon exceed the premium phones that garner all the attention today. ARM says devices with the Cortex-A12 should hit the market in 2014 and early 2015.