In November of 2014, if all goes according to plan, NASA's Sunjammer will be launched into space. Engineers will pack a waist-high shell with a compact probe and a 13,000 square foot solar sail — the largest ever built. Once in orbit, the sail will unfurl, catch the energy of solar wind — essentially a stream of charged particles — and gently pull the craft towards the Sun.

The Sunjammer will also carry the cremated remains of a few hundred wealthy Earthlings, stowed in metal discs that serve as ballast for the craft and protect it by absorbing solar radiation. Paid submissions of text, photos, sounds, and video from thousands more — profound thoughts, surely, but probably also memes, pet photos and YouTube clips — will fill the radiation-hardened drives onboard. The probe's name will be linked to a corporate sponsor — the Mercedes Sunjammer, perhaps, or the Pepsi Sunjammer, making it the first spacecraft funded by the sale of naming rights.

"This could fund space exploration missions in the future."

This is the corporate-sponsored, crowdsourced, privatized space travel of the future, at least according to L'Garde, the aeronautics company that teamed with NASA to build the craft, and Space Services, the firm that hatched these unorthodox ideas and is announcing them today at a press conference. "We see this as a blueprint," Steve Eisele, a VP at Space Services, told The Verge. In an era of NASA budget cuts, he said, "this could be one method of funding space exploration missions in the future."

The Sunjammer's primary goal is to demonstrate the viability of solar sails, which harness energy in the charged particles ejected from the Sun to pull a spacecraft. Scientists dreamed about the possibility of solar sails as long ago as 1610, but the first practical solar sail wasn't launched until 2010, when Japan's IKAROS spacecraft was carried to Venus by the solar wind.

The Sunjammer, with a sail six times as large as the IKAROS, will be launched on a SpaceX Falcon 9 rocket next year at a cost of $27 million. After the sail unfolds, it'll glide towards the Sun for about seven months, then settle into solar orbit at a useful vantage point. "There are neat, clever, exotic orbits you can do with the solar sail that would permit viewing different portions of the sun that we can't normally," Nathan Barnes, an executive at L'Garde, told Space.com in January. Steering the Sunjammer to one of these will allow the NOAA to use data from the probe's magnetometer and plasma reader to observe space weather and provide advance warning of solar flares. Eventually, similar sails could fill all kinds of roles in space: "This isn't just a one-off," Eisele said. "We see solar sails being deployed ... for deep space communication, exploring asteroids, even going to other planets."

As innovative as the solar sail is, however, the funding schemes behind it might be the Sunjammer's most interesting contribution to space exploration. "During the mission proposal, NASA was in the middle of budget cuts, and we basically said, 'Listen, there's a lot of commercial interest out there, and a lot of people interested in space'," Eisele said. "We ultimately said we'd bring some commercial funding to the table, and that's how L'Garde was able to ask for less from NASA."

The commercial funding comes mainly from three revenue streams. One is corporate sponsorship. In addition to a title sponsor, Eisele said the team is pursuing deals with product sponsors, potentially selling the naming rights to the sail and other components of the vessel.

Additionally, working with Celestis, a subsidiary of Space Services that has been sending cremated remains into low-earth orbit since 1997, the Sunjammer will carry anywhere from a few hundred to over a thousand capsules filled with human ashes onboard. "We jokingly call them 'crew compartments'," Eisele explained. The price of stowing one's remains on this vessel is steep: sending a one-gram sample costs $12,500, while seven grams go for $25,000. 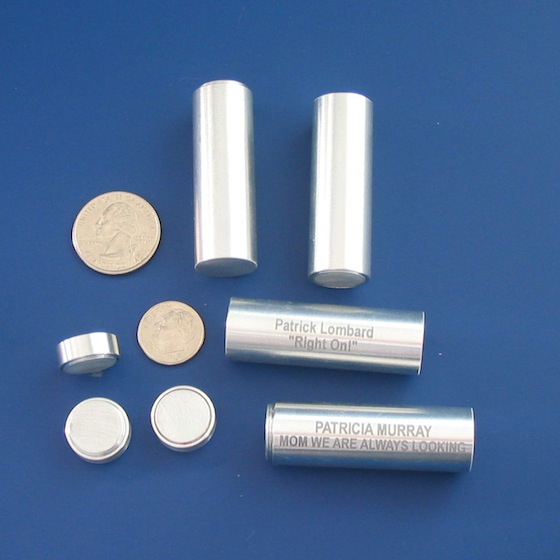 Capsules containing human ashes that have already been dispatched to space by Celestis. (Credit: Celestis)

Lastly, as part of the craft's "Cosmic Archive," L'Garde will capture revenue from customers satisfied with sending mere digital remains into space. Through Sunjammermission.com, anyone will be able to submit so-called "Mindfiles" filled with whatever they like — text, photos, audio, videos — for anywhere from $20 and $50. Those who upgrade to a "Biofile," for around $100, can also send up a single physical hair. If contributors opt to make their submissions public, that contents will be viewable at the mission's website. "In a sense, this is a way to immortalize yourself in space," Eisele said.

The Sunjammer isn't the only endeavor scrambling to fill the funding vacuum left by NASA. Some companies, like Space X, are pioneering private space travel with relatively conventional business models. Others, however, are pitching billion-dollar space programs to foreign governments, offering to mine asteroids for valuable metals, or selling space tourism to the super-rich. And then there's reality television: in April, Dutch non-profit Mars One announced plans to send four people on a one-way trip to Mars with the intention of colonizing a permanent settlement. The estimated $6 billion price tag for mission will be funded, in part, by a reality show about the participants. 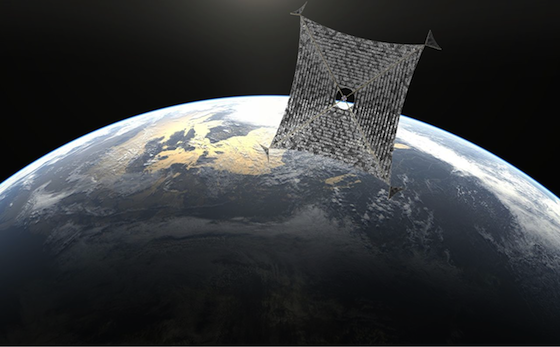 Insert logo here? The Sunjammer might be stamped in corporate logos before it soars into space. (Credit: L'Garde)

Experts are divided on the viability of these unorthodox funding strategies. Paul Kostek, an aeronautics engineer and former president of the Institute of Electrical and Electronics Engineers, thinks the Sunjammer project could, at the very least, further catalyze public interest in space. "For companies, the opportunity to put their brand on a project in space is something people aren't going to pass up. I hate to say it's like NASCAR, but in some ways, it is," he said. The Cosmic Archive, meanwhile, is essentially a Kickstarter for space. Given the gargantuan cost of exploring the solar system, combined with tightened government budgets, Kostek says that such creative approaches to private funding make practical sense.

"I think in the long term, these things are going to lose their novelty."

Not everyone agrees. "My opinion is that these are kind of short-lived stunts," Jim Bell, a professor at Arizona State University and president of the Planetary Society, said of cremated remains and space-bound text messages. "It's a common strategy in business, to attract attention to your cause and your product, and to get investors interested, but I think in the long term, these things are going to lose their novelty." Bell, for one, anticipates private space ventures will be funded largely by space tourism — which will likely become feasible for the middle class by century's end.

Even if ashes and twerking videos don't usher in a new era of private space funding, the Sunjammer, perpetually orbiting the sun, will serve as something of a time capsule for Earth circa 2013 — much like NASA's golden records, still aboard the Voyager spacecrafts, do for 1977. Those records offered up a portrait of Earth as a planet of Bach, Beethoven, and scientific diagrams. The images and videos stowed amidst vials of human ashes aboard the logo-laden Sunjammer, alas, might not be so flattering.