Digg Reader: how a small team raided Google's trash to build an RSS tool for the modern world

Digg Reader: how a small team raided Google's trash to build an RSS tool for the modern world

"We’re the kings of 2007!" said Andrew McLaughlin, CEO of Digg, as we opened beers on a Friday afternoon in the Digg-anchored corner of Betaworks, the high-ceilinged West Village startup incubator where attempts are underway to revive a brand that peaked more than five years ago.

Now Digg is about to release its second product, and it’s even more of a throwback: an RSS reader. Really Simple Syndication was developed 14 years ago, just as people started to realize that the internet was growing fast enough that it was possible to miss things. Today, it’s an essential tool for any power user who wants to stay informed; it also confers a sense of comfort by collecting every headline into a lengthy but discrete reading list.

Digg is about to release its second product, and it’s even more of a throwback

The current team has planned to build an RSS reader since taking over Digg. "If you want to be a place where people go to find cool stories, it makes sense to be a place where people can follow interesting sources," McLaughlin said. It was on the product roadmap for the fourth quarter of 2013. Then Google announced that Google Reader, the most popular and powerful RSS reader on the market, was sunsetting on July 1st.

The Digg team actually knew about the Google Reader shutdown early; McLaughlin worked at Google from 2004 to 2009, and he’s kept in touch with people there. However, the July 1st deadline was a surprise. It would be a rushed schedule, but shifting all their efforts to Digg Reader was an easy decision. "When they said they were going to kill Google Reader, we just jacked it up to the top of the priority list," McLaughlin said.

With three months to build a viable RSS reader instead of nine, the team focused on its priorities. The new reader had to be fast and simple, just like the first version of the new Digg homepage, which was built in six weeks. It also needed to align with Digg’s goal of helping people decide what to spend their time on. "The main challenge for people now is to boil down and distill all the things that they could read," McLaughlin said.

"We just walked over to the dead body."

As it turned out, building an RSS reader is not easy — especially with just two front-end developers, two back-end developers, and a mobile developer. The first version is basically a Google Reader clone, which the team unabashedly admits. "We just walked over to the dead body," general manager Jake Levine said.

While Digg managed to crank out a working RSS reader with data migration, keyboard shortcuts, and an iPhone app, it’s missing a key Google Reader feature: article search. The Digg team has more than two and a half years of experience working in news. Most of the company came from the Betaworks personalized reader News.me, and CTO Michael Young used to be the lead technologist at The New York Times' R&D lab. But the group has no experience with search.

Furthermore, search is an expensive feature that many users won’t care about. "Trouble with search is, not only is it a 100 percent copy of your data, but search indexes can be even larger than your data," said Sam Clay, founder of competing RSS reader NewsBlur. "In other words, it costs a fortune to support a tiny, yet vocal and important, minority." He plans to introduce a limited search feature in the next release. Feedly, another prominent RSS reader, is also working on an article search function. 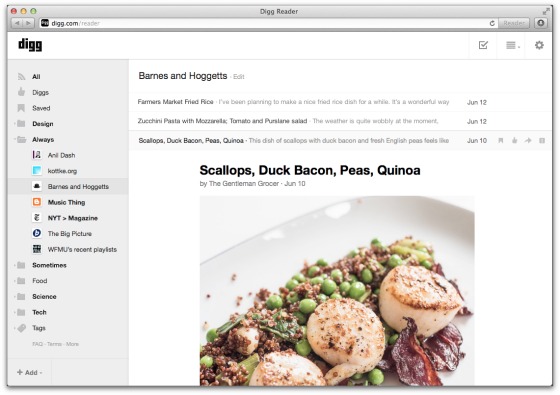 Along with search, Digg hopes to add an Android app and notifications in its next release. Once the basics are taken care of, Digg has some new ideas for social features and tweaks to make RSS reading more useful. Digg Reader will allow users to sort their feeds in a number of ways, including popularity. Items are marked with between one and four dots indicating their popularity with other readers. Eventually Digg wants to let users sort posts by whatever they find useful, including things like article length or word length. In a later version, the team also hopes to be able to crunch a source of URLs, such as a user’s Twitter stream, and turn that into an RSS feed.

The team also plans to add a paid tier that will offer premium features, such as alerts. "The paid version will have features that are so freakishly useful that you would actually be happy to shell out a subscription fee," McLaughlin said.

Digg Reader will start rolling out to users in phases starting tomorrow. The first invites will go to the 17,000 users who signed up to take Digg’s survey on RSS usage. Next, it will open to the public on June 26th, almost a week before Google Reader shuts down.

Digg Reader and Digg.com are separate products for now, but there is some synergy between the two. Digg’s own editorial team is staffed by RSS power users: they’ve been using Google Reader heavily to find stories for the front page, and now they have an in-house tool. Signals from the Digg Reader will also factor into the algorithms the company uses to find rising stories.

The primary reason to build an RSS reader was to serve users, however. "It’s a hard thing to build in a short window," Levine said. "It’s not something you will get $20 million from investors to do, but it’s a hugely useful product that a lot of amazing, brilliant people use on the internet. So it makes sense for us."