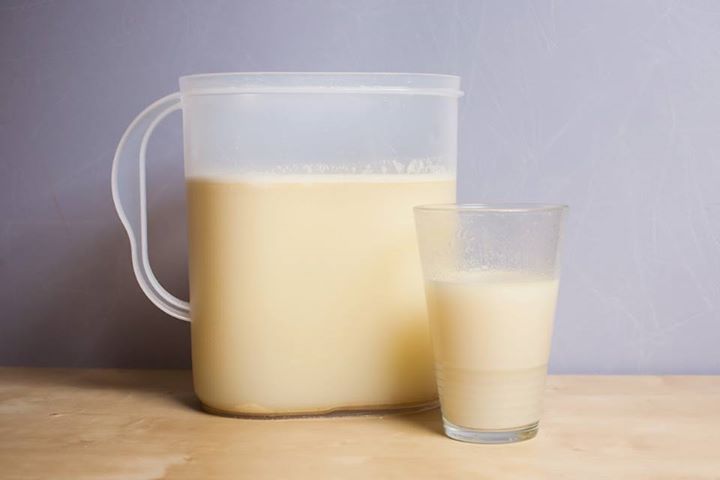 No, seriously, big spoiler alert. Though you've probably already heard this one. It's on that Threadless tee with all the spoilers. Also, it's 40 years old. Soylent Green, that government-rationed food substitute that everyone loves so much, is made out of people. Surprise!

Soylent Green. I'd heard of the 1973 Charlton Heston classic, and I knew the big twist. I'd read the IMDb entry, seen the poster, watched the trailer. I knew the facts, but I hadn't seen the film. And, for the moment, it was filed away somewhere down my "maybe I'll watch that someday" list.

But then something strange happened. Something that moved the film right to the top of my "drop everything and watch this right away" list. My co-workers were drinking Soylent.

Soylent slowly taking over the office. RLRT @thedextriarchy 'it's like the uncanny valley of food'

At first I thought they were in on the joke. They were just trolling me, as tends to happen at The Verge office. Good joke guys. You put some protein powder in plastic bags and Instagrammed yourselves hashtag "Soylent". Haha, you're eating people. Haha good joke, right? Right??

Then a quick Google search brought me to this:

Soylent frees you from the time and money spent shopping, cooking and cleaning, puts you in excellent health, and vastly reduces your environmental impact by eliminating much of the waste and harm coming from agriculture, livestock, and food-related trash.

Apparently, 24-year-old Georgia Tech student and Y Combinator alumnus Rob Rhinehart has gathered an engineering and sales team to create "the easy, healthy future of nutrition", a powdered food substitute made from a formula of other, already-available powdered supplements. To raise funds for the project, the team launched a Crowdhoster campaign. (Crowdhoster is similar to Kickstarter, but it allows users to create their own fundraising website. No, I hadn't heard of it before, either.) With a goal of $100,000, the project was fully funded in under three hours, and with one day left in the campaign, the team has raised over $700,000 from almost 6,000 backers. So far, Soylent, still in its testing phase, has shipped only to the press. The Soylent team claims their product will save the world in many of the same ways typically promised by recent food movements. It will protect the environment, keep you healthy, help feed the poor, etc. But Soylent also promises something the local and slow food movements do not: efficiency of consumption. One of the company's biggest talking points is that Soylent is quick and easy, and doesn't require eaters to waste time shopping, cleaning, cooking, heating, reheating, etc. Just add water and stir. 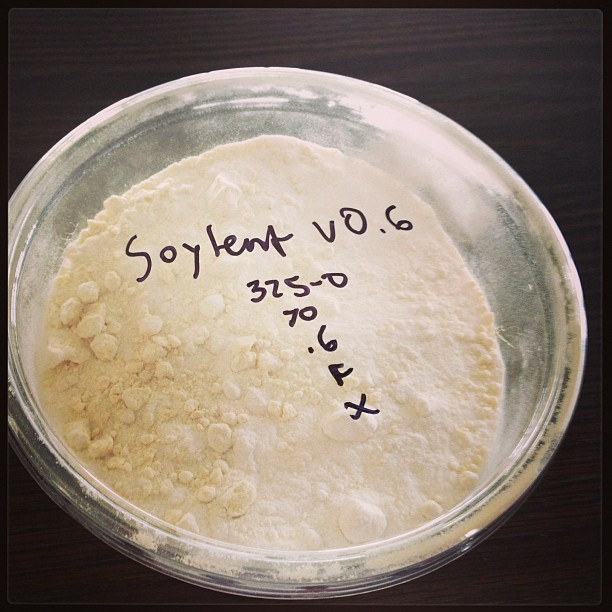 Could it be really real? Could this startup kid be stupid enough to name his powdered food substitute after a fictional product famously made from ground-up humans? If so, who was the target audience? Doesn't everyone know that SOYLENT GREEN IS MADE OUT OF PEOPLE? Besides, do people even want to eat faster? Call me old-fashioned, but I thought people enjoyed eating. To me, the prospect of consuming powdered food 21 times a week seems about as appealing as being fed intravenously, which is to say not appealing at all.

After hours of trying to understand why so many people I know and respect were buying into this, I decided I should probably see the film. 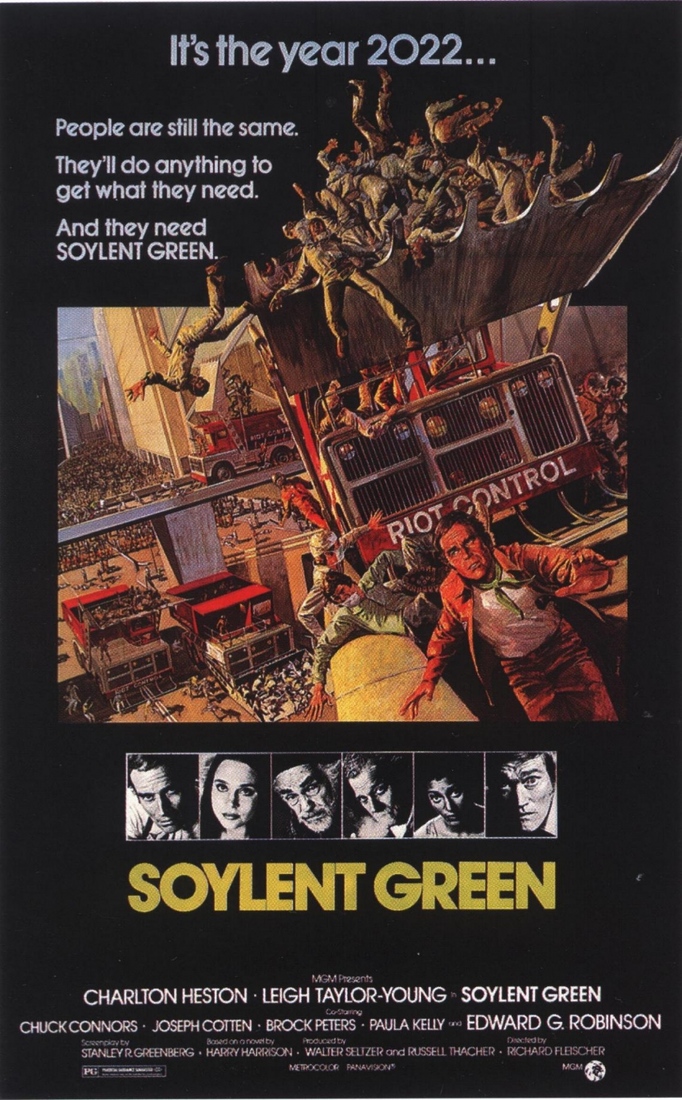 Set in the year 2022, Soylent Green follows NYPD detective Robert Thorn (Heston) as he investigates the assassination of William R. Simonson, a director of the Soylent Corporation. Due to overpopulation, pollution, and global warming, real food is scarce. The Soylent Corporation has been producing wafers of different colors to provide as rations to the people. The latest variety, Soylent Green, is the most nutritious and best tasting, but it is also in the shortest supply. New York's citizens are willing to risk their lives to get some, and the few men who know the formula will kill to keep it a secret. Simonson became a risk, and he was silenced. Detective Thorn's investigation eventually leads him to the Soylent factory, where he sees bodybags being dumped into giant meat grinders. Burdened by the truth, he risks his life in order to expose the atrocities of the Soylent Corporation.

So now I'd seen the movie. It was no longer just a jumble of quotes and tidbits in the back of my mind. Now I had the whole story. About the real Soylent Corporation, however, I still felt deeply confused. The question kept repeating in my mind: can this be real?

It was then that I had an epiphany. It was so obvious. This wasn't a real attempt to sell a powdered food substitute; this was Hollywood magic. This was the viral marketing campaign to end all viral marketing campaigns. Sure, The Dark Knight Rises destroyed billboards. Lost set up an alternate reality game that let viewers play along. But this was on another level. This was brilliant. Start a crowdfunding campaign, send out press samples, receive upwards of half a million dollars in pledges from backers, and cancel the project before anyone's credit card gets charged. Among the ensuing uproar, link out to the trailer for the new Soylent Green remake.

But wait a minute. What remake? For years now, there's been rumblings about a new film, but the same is true about nearly every science fiction film from the 70s and 80s. I remember hearing about the Robocop remake six years ago, and we're still waiting on that. There's an IMDb page for a new Soylent Green movie, but it provides no information. Warner Brothers owns the rights to the story, but they haven't announced any plans for a remake or sequel.

Maybe I was wrong. Maybe it's not a film. But still, it can't be real, can it? As I dug deeper, I quickly found myself in full-on conspiracy theory territory. 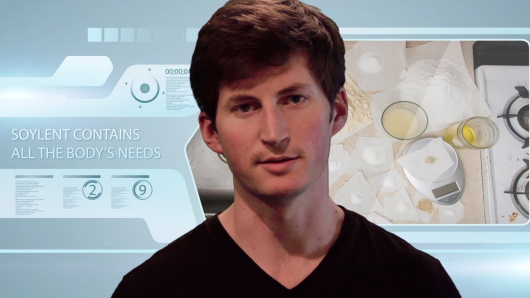 The list goes on, and the more I dug, the less I really understood. Navigating the internet isn't like watching a movie. You don't get concrete answers, you don't know who to trust, and there's no ending. I'd never be able to simply finish this investigation the way I was able to watch the film and connect all the bits of information I had known about it previously.

There's a scene in the film where Detective Thorn tries to convince his boss that Simonson's death was an assassination, and not a burglary-gone-wrong. A major piece of his evidence is that the killer used a meat hook as a weapon. "The punk was no punk. He used a meat hook instead of a gun to make it look like a punk." Thorn's proof that the killing was an assassination is the fact that it specifically didn't look like an assassination. I feel like Thorn. Some of my colleagues think I'm onto something. Others think I'm acting crazy. So far, I haven't proven anything one way or another.

If we find out on Friday that this is a viral marketing campaign for a Soylent Green remake, I'll feel vindicated, I'll win a $20 bet, and I'll wonder how so many smart people fell for such an obvious hoax. If I'm wrong, and this is a real product that does everything it claims, I have to wonder what it says about our society. In his most recent blog post, Rhinehart addresses some of the criticisms he's received regarding Soylent. To those who claim they actually like eating food, Rhinehart responds:

I like beer, but I usually drink water. I love walking through the city, but I usually take the bus. I love conversation, but I still send a lot of emails. I find separating utility from leisure increases my enjoyment of both. Personally, I enjoy food, there are just many things I enjoy more.

I can understand the argument, at least in theory. Drinking Soylent certainly does seem easier than cooking, just as email is often an easier way of dealing with potentially awkward human interaction. He goes on to say, "Now I have the freedom to spend more time on the things I want to do." What happens when those things become easier? Eventually, we'll find ways to more easily consume music, movies, art, words, concepts, knowledge. And then we'll have all that free time to just sit around and enjoy... what exactly?

Just because we can eat something, doesn't mean we should. Just because Soylent Green solves world hunger, doesn't mean we should become cannibals. Another scene in the film comes to mind. While searching Simonson's incredibly lavish home for clues, Thorn is able to steal a bundle of real food, including apples, lettuce, even raw beef. He brings it home to his colleague and roommate, and they enjoy a meal together. Thorn, being relatively young, has never tasted real food before, and the experience for him is overwhelming. It's as if he's seeing snow for the first time, or hearing the most beautiful music in the world. Food is not something to be taken for granted; it's not something purely utilitarian that we need to make more efficient. It is not just a means to an end, but rather an end in itself.

Whatever the case may be, there are some facts I know for sure. There is a fundraising campaign for a company, real or imaginary, called the Soylent Corporation. This campaign has raised over $700,000 in pledges. In the process, somebody has sent plastic bags of white powder to beta testers and members of the press, who have quite literally eaten it up. Twitter is buzzing with positive reviews of the product, and backers eagerly await their first shipments. All of these things are true. These things are really happening.