For Nvidia's quest to 'light every pixel,' Tegra and Grid apparently aren't enough

For Nvidia's quest to 'light every pixel,' Tegra and Grid apparently aren't enough

The GPU giant will license its technology

Just three months ago, Nvidia CEO Jen-Hsun Huang articulated a grand goal. By the year 2017, Nvidia would aim to "light every pixel" of every HD display in the world. To get there, he explained, the company would rely on a combination of processors and the cloud, putting a Nvidia GeForce, Tesla, or Tegra chip into every product it could, and then streaming data to everything else from Nvidia Grid servers. "If we don't power all of them, we can stream to the rest of them," Huang said. But in three short months, the thinking at Nvidia seems to have evolved.

On Tuesday, the company announced that it would license out its graphics-related intellectual property, including the designs for its actual GPU cores. That could be a fantastic thing for Nvidia, opening up new markets where its proprietary graphics have never been before. For instance, Apple's iPad and iPhone processors have long housed GPU cores from a company called Imagination Technologies, and Apple could theoretically license those from Nvidia instead from now on. But what about Nvidia's own Tegra chips, which compete in the smartphone space, and whose prime selling point is their GeForce graphical prowess? Is Tegra faltering to the point where Nvidia feels that it can cannibalize its own market? 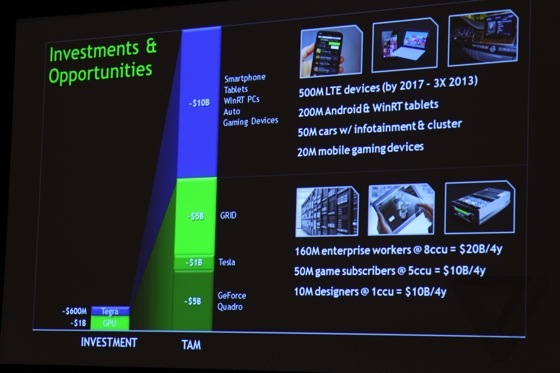 Nvidia SVP Dan Vivoli says that's not the plan. While Vivoli admits that Tegra has indeed had an "off-cycle" — and even that some of the devices that Huang was hoping to serve with an actual Tegra processor might now merely use Nvidia technology in a different manufacturer's chip — he's adamant that Nvidia won't necessarily broker deals with companies that could harm the overall business. "If we're in a market where we're selling chips and are doing well in that market," Vivoli says, "we have to decide whether we'd make more money serving that market ourselves or selling the core to a competitor." What if AMD asked to use Kepler? "We'd talk to them, but the odds that we'd come up with a deal that works for both sides would be pretty low," he explained.

Nvidia also plans to extend the offer to future GPU cores, not just Kepler, and says it will do so as soon as the new components tape-out, without holding back any advantage for its own GeForce or Tegra products. "We're not trying to create an artificial gap." Whether it will do the same with its Icera modem technology is still being discussed, Vivoli tells me.

When I ask the VP whether Nvidia could wholly swing in this direction, becoming an equal-opportunity intellectual property provider like ARM or Imagination Technologies, both of which design things they never actually build themselves, he says no. "We don't intend to become an ARM."

"We don't intend to become an ARM."

But the way Nvidia sees it, the industry is getting more closed to traditional competition, and it needs a way to extend its graphics reach. The company isn't risking the chance that Tegra and Grid alone will be enough to light all those pixels.

"We don't want to look back and say we wished we had this business model."