Pixar has a long history of building new software between projects (most recently overhauling its rendering software for Brave), but in the run-up to Monsters University, the changes cut particularly deep. As planning kicked in, director of photography Jean-Claude Kalache announced he wanted to change how light worked at Pixar.

"We wanted to stop being engineers and be artists."

"What if we made these lights just work?" Kalache told The Verge, in a Jobsian turn of phrase. Instead of building reflections and shadows manually, why not do it automatically every time an artist placed a light source? "It was as if every time you took a photograph, you built a new camera," Kalache says. "It takes away from the art of taking a picture. We wanted to stop being engineers and be artists." The result was Pixar's new Global Illumination lighting system, which gets its first public debut on Thursday with Monsters University.

It sounds harmless when Kalache describes it, but the new system represents a complete overhaul of the lighting system that had served Pixar since the Toy Story days, and left many artists relearning the basic elements of their job. "It was extremely controversial," said Pixar's technical director Chris Horne in a recent interview, "but it made a huge impact."

"It was extremely controversial, but it made a huge impact."

The change has to do with ray-tracing — the technique of mapping out every ray of light in a given scene, as it bounces off walls and characters, casting shadows and producing reflections. It's closer to the way light works in the actual world, where a single light source will bounce light into every corner of a room. It's already common in partial-CGI environments like the Transformers and Iron Man movies, where Industrial Light & Magic used the technique to create metallic reflections. But for Pixar's full CGI environments, mapping out the millions of beams of light was seen as too arduous to be practical. Instead, Pixar relied on manually placed shadows and a network of direct light sources, a setup that was becoming increasingly intricate as the models and setups became more advanced.

Part of On The Verge — watch the full episode here

The new Global Illumination system did away with all that, producing automatic reflections and shadows based on a simple placement of lights. If a wall is blue, the light coming off it will be exactly as bluish as it should be, at least to start with. Since Pixar is still, as Kalache puts it, "a company that makes cartoons," the system leaves room for artists to blow out lights and shadows beyond what’s realistic, but the baseline is a naturalism that’s based on the physics of light. And instead of artists planning out soft lights and shadows, everything is moved into hardware. That leaves less work for the designers but more work for the render farm, which works at night while the designers sleep. "It's all in the memory," says Christophe Hery, the system's core architect for Monsters University. Because of the intensely interconnected nature of the light, everything had to be processed at once, which resulted in incredible RAM demands. Describing one scene, Hery says, "We had the full campus. We had the trees, the grass, the people, the crowds, all held in memory at once. At some point, the rendering engine can try to be clever" about what doesn’t need to be rendered, "but you can only hide so much."

That's a lot to keep in RAM. The biggest struggle was to keep each frame down to 20GB of memory. Pixar’s render farm uses machines with 96GB of RAM each, but since the machines need to process four frames in parallel, anything much higher than 20GB was dangerous. That might seem like a lot for a single frame, but it has to hold every object in the scene, on-and-off camera, right down to the hairs of each monster’s fur. As long as it’s reflecting light, it needs to be in memory. And if any of those hairs move, the light has to be completely recalibrated — usually in another overnight turn through the render farm. 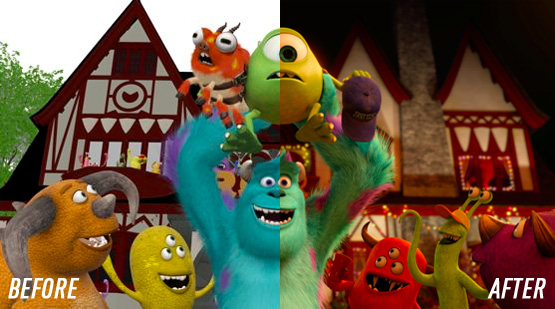 The result was more time spent on models, and more complex setups than would have been possible in the past. Kalache points to a Monsters University scene in a tunnel, where sea urchins provide thousands of moving light sources, each reflecting back and forth off the tunnel walls. Calculating each reflection individually would have meant five times as much work, a mind-bogglingly intricate setup for designers.

But even in less complex setups, you can see the effects of Global Illumination. Monsters University scenes have more soft shadows, fewer eerily well-lit backgrounds than earlier Pixar films. It’s more on par with the lighting and cinematography you’d see in a live-action film, owing less to the cartoony flatness of cel animation. Audiences may not notice, but it doesn’t seem to bother the team. Unlike Optimus Prime, this kind of effect is designed to live in the background, helping the story from behind the scenes. In Kalache’s words, "successful lighting is silent lighting."