Welcome to Camp Apple: a week inside WWDC

Welcome to Camp Apple: a week inside WWDC

Peering into the depths of Dub-Dub

It was the second day of Apple’s Worldwide Developers Conference in San Francisco, and a heated argument was breaking out at the bar on the terrace of the W Hotel.

The W Hotel is a couple blocks from the Moscone Center, where Apple holds its once-a-year Worldwide Developers Conference, known as WWDC, or more colloquially as "Dub Dub." This time of year, it’s not unusual to see two grown men having a heated argument about the pronunciation of a font.

"Whatever," says Capps. "Let’s have another drink." They take sips as Studio Neat developers Dan Provost and Tom Gerhardt storm the stage and perform "Hunger Strike," by Temple of the Dog in front of a five-piece live band. Gerhardt was Chris Cornell, and Provost was Eddie Vedder. 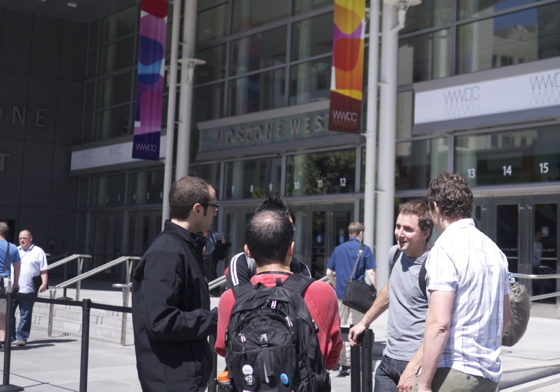 This is WWDC's 24th year, which makes it the longest running of any developer conference. Developers and designers set up myriad hacks to know when WWDC tickets go on sale each year, and once they do, scoop them all up within minutes. This year, it took just 71 seconds for the conference to sell out. Tickets alone cost $1,500, setting aside the cost of a flight (often, from overseas), a hotel, and the fact that Apple also posts most of its sessions and labs for free online. Still, developers brag on Twitter if and when they acquire tickets as if they’ve won the lottery — a trip to Mecca.

The conference centers around a massive keynote on Monday, followed by a week of classes where developers can learn about the latest APIs from Apple — which has paid them (indirectly, of course) upwards of 10 billion dollars. It's a symbiotic relationship.

A moment later, a man walked up and bared his chest, inked with a detailed tattoo of Steve Jobs' face

One workshop, called UI Lab, gives developers the chance to sit down one on one and get a personal review of their app’s interface. Developers line up around the block, waiting hours for their moment. Once their appointment comes around, an Apple engineer proceeds to tear apart their app, first tapping with three fingers on the screen to zoom in and scrutinize any jagged icon edges.

It wasn’t all hard knocks for the developers. Another session began with an out-of-character admission from Apple: "We’re sorry." The company finally admitted iCloud Core Data was broken and needed fixing, sources at the session say. Apple had thus far been a brick wall to developers, and kept almost completely quiet about the unstable file-syncing feature, which customers demanded but developers couldn’t reliably provide.

A developer account with Apple entitles you to just two direct questions per year from the company, so the opportunity to ask questions during "office hours" is an important one. "If I get a few big questions answered, it’s worth the trip," Second Gear developer Justin Williams told me as we sat down for lunch at the nearby Yerba Buena Gardens cafe. A moment later, a man walked up to Williams and bared his chest, inked with a detailed tattoo of Steve Jobs’ face. 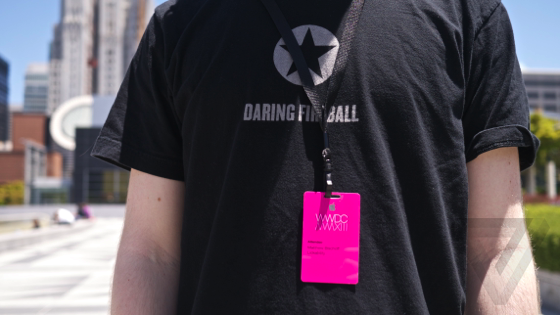 As any WWDC veteran knows, it’s about the scene as much as it is about the learning sessions Apple offers. It’s about the standing around at bars wearing backpacks filled with nests of white cables. It's about drinking with actor Damon Wayans, who is apparently now an app developer, at the Macworld party. Many of the attendees can’t yet drink, but have already made thousands (or hundreds of thousands) of dollars on the iTunes App Store. The air is full of playful gossip amongst friends, some of whom had never met in person. "Did you hear that Jony Ive personally called Marissa Mayer to congratulate her on the Yahoo Weather app?" says one man to another.

There was something a little different this year. Apple’s iOS, the platform many WWDC attendees build for, got its biggest facelift ever. iOS 7 is shocking to behold, not necessarily because of the way its apps look, but because of the way its app icons look. It’s not unusual to pay hundreds of dollars for a custom-designed icon from a company like The Iconfactory, since App Store customers so frequently judge a book by its cover. Yet, most designers seem to agree that Apple’s new icons are ugly and inconsistent.

"Did you hear that Jony Ive personally called Marissa Mayer?"

It was widely reported prior to the event that Jony Ive, Apple’s hardware design guru and the spiritual successor to Steve Jobs, was leading the makeover on iOS 7. In the aftermath of the new look, many attendees were looking for an answer. "Did you hear that Apple’s usual icon guys didn’t work on any of iOS 7’s icons?" says one man to another. "I hear Apple brought in its graphic design and marketing teams to design iOS 7’s icons." Another man whispered, "I heard Apple even laid off some of its old UI team."

Most developers and WWDC attendees say that upon leaving the conference, they’re left with a newfound desire to build great stuff — to develop apps for Mac and iOS that make the world a better place. Wrapped snugly in their complementary WWDC jackets, they bask in the glow of a MacBook Air or iPad on the plane ride home. More than a few of them will be on Photoshop frantically mocking up their apps in Apple’s new design language, which to many, removes key elements of their apps like navigation bars and "glyph" buttons they had spent hours designing. The air of drama at WWDC this year was founded somewhat in the anxiety of redesigning apps to match Apple’s new design direction. "I’m excited about it, but I’m also bewildered," says Apple Design Award winning-developer Jeremy Olson. "Apple is now using words instead of icons. How do we respond to that?"