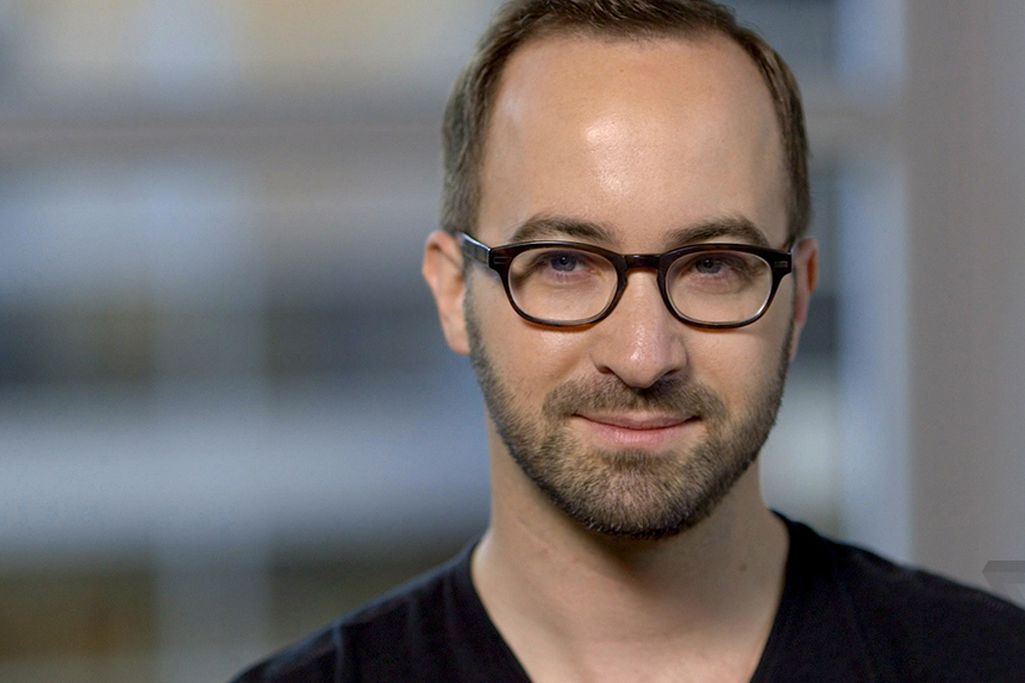 Pixar Animation Studios isn’t just known for its feature films. Shorts like Tin Toy, Geri’s Game, and For the Birds have become classics in their own right, praised both for their whimsical stories and their technological innovations. Paired with Monsters University is the studio’s latest: The Blue Umbrella, from director Saschka Unseld.

Unseld served as a layout artist on films like Toy Story 3 and Cars 2, but The Blue Umbrella takes a remarkably different aesthetic approach than those films. The story of two umbrellas that meet cute and fall in love on a crowded city street, it’s being billed as Pixar’s first photorealistic short, and it delivers on that promise. The effect is so striking, I spent the first three shots of the movie wondering why Pixar had decided to show live action footage before the short itself began. As part of our visit to Pixar, we sat down with Unseld to talk about the company’s creative process, the impetus behind The Blue Umbrella, and what drove the move to photorealism. 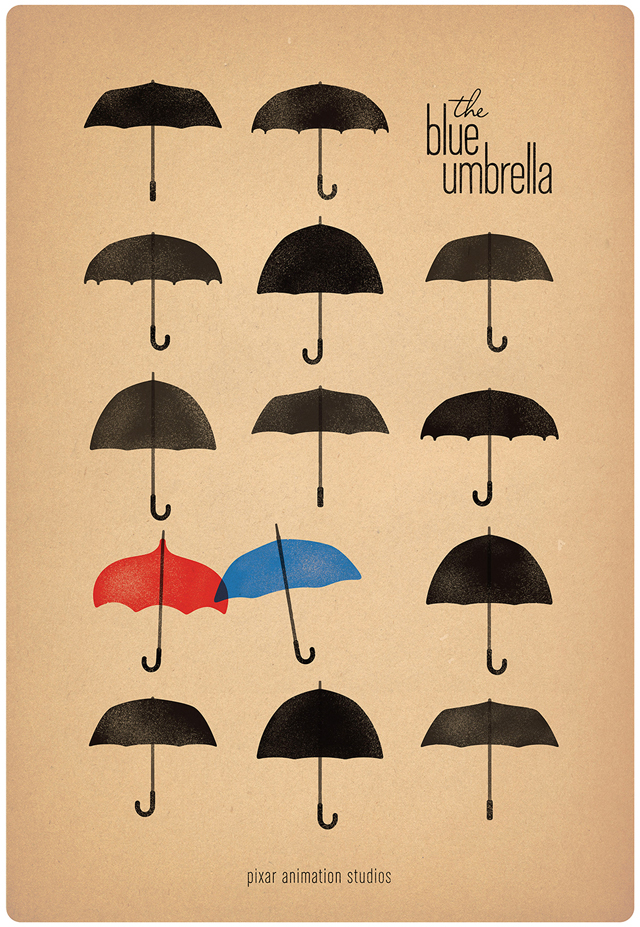 First off, I have to ask because I have a hard time believing it: is is true that there is no live action footage in The Blue Umbrella?

Yeah. The Blue Umbrella was all animated. There is no bit of live action anywhere in the film.

What was the path that led you to make the movie?

I started in 2008 at Pixar, and I started in the camera and staging department, which basically does the virtual cinematography of the films. There’s an open door policy at Pixar about pitching ideas for short films, so anyone can pitch as long as you have three ideas, and I just thought I should try it. I didn’t think it would work out, but I thought I would not forgive myself if I don’t try it. So I came up with a couple of ideas, and one of them was The Blue Umbrella, which I literally found one day on the street. It was raining, and in the gutter on the street in front of me I saw an umbrella that someone had tossed away, or lost, and no one cared about it and it was half-broken and drenched, and looked utterly sad. I was like, “What happened to him?”

Was the photorealistic approach always part of the plan, or were you just working with a story concept at that point?

While I worked on the story for it, I never thought of how it would look visually. How we did it visually kind of followed what the idea of the story was, so it was based on that. It was based on tests I had shot just for fun on my phone actually, of faces in the city, and I had loaded them on my computer one week and animated them. That was part of the pitch I showed, just to show what I mean with the city coming to life.

And every time I showed it, I always sat next to the screen so I saw the people watching it, and I hit play, and people just watched basically me shooting something on my iPhone. They were like, “Why is he showing this to us?” And then this first kind of coming to life happens, and I always saw in the faces of people how amazed they were, and how much it caught them by surprise. That’s when we came up with the idea, the magic in this is that it’s real, and comes to life. If it would be cartoony or stylized, it would be like, “Yeah, you’re expecting that,” but not in this context. We thought, “What if the whole thing would be photoreal, just to maintain this magic of it?”

Technically, what did that jump require?

I think just a lot of insistence on attention to detail. It’s funny, we used the Global Illumination technology that Monsters used as well. So that helped us massively in getting everything lit more realistically, but Monsters is a completely stylized film, and we’re completely photoreal. So how you focus the technology to be used, it follows through to how you use the camera, how you stage an action, how you give the audience a feel of the set, how you do the editing. Everything with that, you have to look at what is specific about live action that is different from an animated film, and if all of these things play well together then you get the sense of it being a real world.

How does the Global Illumination system you mention play into that?

The biggest difference, what it does, is it kind of simulates what real light does. Basically, that it bounces off of surfaces; off the walls. If there’s a red wall, the light bounces off and actually takes on red light and all these complex things that happen with real light.

"You get to a point where you have happy accidents happen."

So basically you switch on one light and you get all this complex stuff happening, which is fascinating because you get to a point where you have happy accidents happen, like the [film’s digital] lighter will switch on a couple of lights, and something happens that he didn’t intend to happen — but it’s actually something that looks good, or looks interesting, and you might use it even though you didn’t initially think of it. Which so far has been impossible in CG animation because everything you wanted you had to create by hand and you had to purposefully place in there.

So it’s allowing you to create that sort of beautiful chaos of shooting on a real set, but inside a computer.

Exactly. We had the moment when the red umbrella is being held over the blue, and there’s this reflection on blue which is the bounce of her light. That was never planned for. That wasn’t boarded like this, it wasn’t something we gave direction to for the lighter. He put on these couple of [virtual] lights, sent out the render, and this thing happened. And we were like, “This is fantastic, let’s use it.” There were a couple of moments where, because of the complex simulation, we got something and were like, “Oh, let’s use that because it’s beautiful.”

You mentioned that Pixar has this open door policy on pitching shorts. Is that a way of discovering new ideas and finding new filmmakers?

Yeah, I think it’s multiple things. One, it’s just talent scouting and giving people opportunities for new roles. Not just the people who direct the shorts, but the animation supervisor, or the lighting DP [director of photography]. It’s kind of a nice playground to have people try out new roles and positions, and even send them to new departments, to be a bit more playful with that. And it’s great for switching up the pace, because you work for three years on a feature, while on a short you might work for four months and then it’s done, and you’re so much closer to the final result because the team is so much smaller.

How does it work in terms of resources. Are you pulling from the pool of other Pixar animators and employees in between the feature projects?

Yeah, exactly. There’s a short lull between the features. So for The Blue Umbrella, Brave was slowly ramping off and Monsters University didn’t fully start production yet, and we kind of tried to get into this small lull to just grab as many people who were free at the moment and hold onto them as long as we could before Monsters University just needed everyone to make it gorgeous as well.

My first thought after seeing the short was that we’ve crossed a new threshold in visuals. Does this mean there's a photorealistic Pixar feature in the works?

The interesting thing about this is that I think it’s not about everything moving more photoreal. I think what everyone was amazed at about this short, what John Lasseter and Ed Catmull were excited about was to break open what animation could look like. It could look way more photoreal, but it could also look way more painterly. Just to get rid of this conception we have, of how CG animated features look. Breaking new ground in that territory.

Ultimately, it’s always about what fits the story. That was what I mentioned earlier. First there was the story, and then it, was, “Okay. What is the style? What is the look we can best tell it with?” Because there are no technical limitations anymore. You can make it look however you want it to look.