As Google prepares for Reader's ultimate shutdown, company after company has emerged from the woodwork to offer replacements for what was once the power user's de facto news reader. AOL was one of the most obvious candidates to launch an RSS reader, and the company has obliged with AOL Reader. It's an RSS app through and through, designed to be as simple as possible for Google Reader ex-pats to get used to — but it borrows from the best of the rest of its competition as well.

Reader begins its life as a fast, simple website that looks quite a bit like Google's own app. It has dark and light themes, and though it's slightly busier than Google Reader it's certainly a more approachable design. Like seemingly every RSS reader, it's divided into columns: one on the left with nested folders of your site subscriptions, a big one in the center with whatever you're reading, and a tall ad on the right that currently prods you to make AOL.com your homepage. 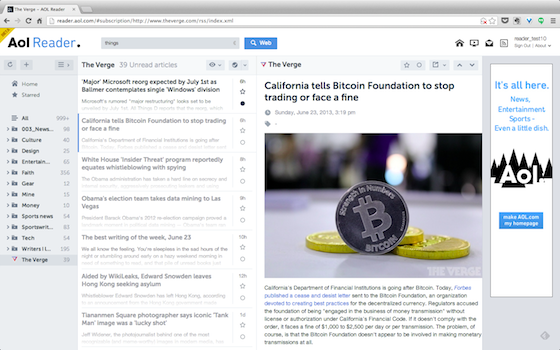 There's no specific import solution for Google Reader users, but it's easy to add subscriptions by search, URL, or by importing a standard OPML file. There's also a categorized list of sources you might like, though it's mostly focused on hawking AOL sites. Organizing feeds into folders is easy, and unlike Feedly you can have a single, standalone feed by itself as well. There's a tagging system for articles and sources, so you can create your own ad-hoc archives — I used tags to collate research, which was really handy. You can tweak the font size, or choose how items are presented — Card, List, and Full Article views appear to be ripped directly from Feedly's options — but the interface here is otherwise intentionally sparse.

It's also impressively fast, which is the only thing that will matter to most Google Reader users looking for a new home. It refreshes quickly, and articles load as fast as you can flip between them. There's basically no learning curve, either, and all your j's and k's and s's will work just as you expect. But there's plenty missing, too, including two features that will likely drive day-one switchers to another option: it's impossible to search the content of your feeds, and there's currently no way to see all your feeds at once, in reverse chronological order. (AOL Reader sorts everything by source, then by date, which doesn't make much sense.)

AOL Reader is fast, and that's by far the most important thing 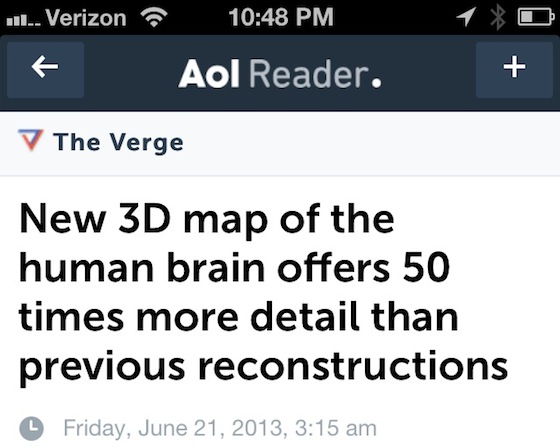 AOL Reader is a responsive website (I liked it best in tablet mode, which hides the ad), and there are apps on the way as well. There's also an API that will let third-party developers use Reader as their backbone — that's a crucial piece for whichever option will emerge as Google Reader's true replacement.

The app comes into a market crowded enough to make you wonder why Google killed Reader in the first place. At the moment, it's hard to come up with a great reason to use AOL's version. Digg Reader is just as fast, and offers more and more personalized sharing options; Feedly is a slightly heavier app, but it's far more powerful and more cross-platform; Newsblur has everything AOL Reader offers and much more besides. But even with its very first try, AOL built a fast, simple, responsive RSS reader that won't terrify Google Reader's many castaways, and that's at least half the battle. Now, AOL just needs to nail search.

More from this stream Requiem for Google Reader: an RSS behemoth shuts down