Can iPhoto and iMovie refocus in an Instagram world?

It's time for Apple to simplify the iLife

Despite CEO Kevin Systrom's proclamations, Instagram didn't show off anything revolutionary last week when it added videos to its massively popular photo-sharing service. The new feature essentially takes the best of Vine and mashes it up with Instagram's popular filters and highly engaged user base. Though it may not have been a very exciting announcement, it'll likely help Instagram cement its position as the default place to edit and share photos and video from the most important computer people use today: the smartphone. Of course, Instagram owes a lot of its early success to the iPhone, a device that's quickly become one of the most-used cameras in the world. But on the software side, Apple's been focusing on features that mobile users don't seem to want or need.

The style of editing pioneered by apps like Instagram, Vine, or Flickr may bear little resemblance to what photo and video pros do in Aperture, Lightroom, or Final Cut Pro. But make no mistake — mobile apps have quickly become the de facto way for the average consumer to view, edit, and share photos and videos. A big part of that success has come from the way these apps have specifically avoided re-creating what works on the desktop in favor of focusing on what matters most on a mobile platform: simplicity and maximum shareability.

Simplicity and maximum shareability matter most on mobile

Instagram essentially built a Twitter for photos and made sharing to the dominant social networks incredibly simple — helping Instagram become a dominant social network in its own right. Some may question the value of the app's filters, but there's no doubt they provided an aesthetic people enjoy and also provide an easy way for users to differentiate their photos. YouTube Capture cleverly lets users start recording video as soon as they rotate their phones to landscape mode (which helps cut down on the dreaded portrait video phenomenon), while Vine's "touch to record / release to stop" UI brought real-time video editing to the mainstream.

It's the "good enough revolution" all over again — while a six-second video clip may lack the depth of a more elaborately produced piece, it's a quick, highly shareable piece of content. And while smartphone photos don't yet match up to images from a DSLR, they generally look pretty great on other smartphone's screens — and for a lot of people, that's all that matters. To use Steve Jobs' favorite phrase, apps like Instagram and Vine "just work."

It's the 'good enough revolution' all over again

While Apple has made the iPhone's typically excellent camera a major selling point since launching the iPhone 4 in 2010, the company has had a much more challenging time cracking the new model of photo and video sharing and editing for iOS. Instead of building apps that focus on quick edits and sharing on the networks your friends use, Apple built miniaturized versions of its desktop software with too many features and overly complicated interfaces. 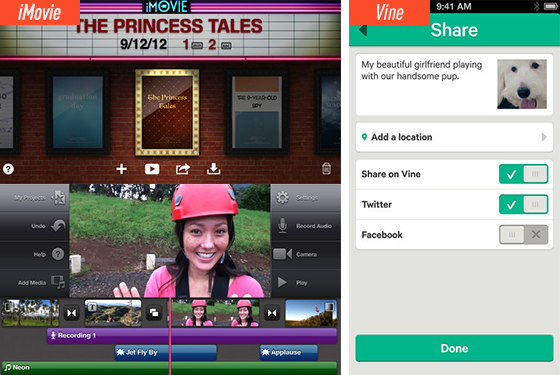 Apple focuses on detailed editing rather than quick sharing

Unlike Vine and Instagram, iMovie and iPhoto for the iPhone both focus on detailed editing features rather than speed and quick sharing. They're powerful and packed with features, but there's also a much higher learning curve and a lot of bloat, which makes it harder to do the quick editing and sharing that mobile users want. For example, iMovie contains an elaborate "movie trailer" feature that lets you choose from a number of themes (fairy tale, romance, superhero) full of animated graphics, bombastic soundtracks, and text overlay. iPhoto's "journal" feature is a bit more reserved, letting you group a variety of related pictures together along with functions like calendar, weather, map, captions, and a terrible faux-pinboard backdrop. From there users can, of course, share their creation with the web via iCloud. Both features exemplify Apple's approach of trying to shrink its OS X apps down to iOS — without asking whether its users want those features in the first place. 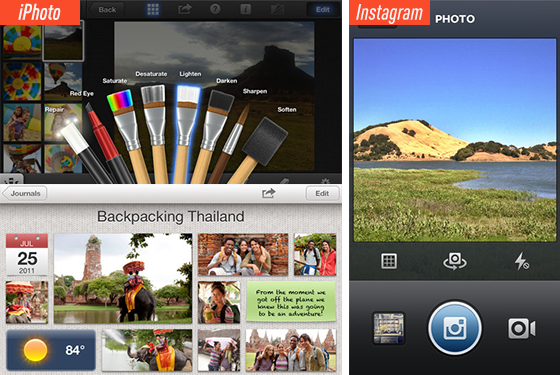 In retrospect, it seems as though Apple got too caught up in dispelling the most common criticism of the iPad: it's for content consumption, not content creation. That complaint has largely died down by now, but it's still something that Apple thinks about. Tim Cook recently said that "there was some concern that [the iPad] would be a consumption device. But we proved it could be a productivity device." Cook even called out iMovie specifically, calling it an "incredible" app and said Apple would continue focusing on the "creation space."

But Apple went so far trying to prove that its mobile devices can be used for creation that it never figured out how content creation on iOS should be different than content creation on a Mac. It's an understandable misstep — after all, Apple's found great success with its digital hub and iLife strategy over the last decade. But by staying so wedded to what worked on the Mac, it was stalled by the dead simple, "good enough" approach. Vine "just works" in a way that iMovie doesn't. To be fair, neither Google nor Microsoft's mobile media solutions compete with Instagram, either — but neither company has the pedigree or the killer-app potential of the iLife suite.

That battle between creation and sharing is at the core of what Apple's approach to video and photos is missing. GarageBand is a excellent example of an app where Apple prioritized a deep creation experience, with a familiar UI that includes some smart touchscreen-specific tweaks, That approach worked for GarageBand and a number of other excellent iOS music apps — but the opposite approach has been most successful for photos and video. Almost universally, consumers have prioritized sharing over creation, and the UI in photo and video apps has simplified greatly as a result. It's a lesson that Apple's going to have to learn if it wants to build a compelling digital hub for the modern age.

Will Apple show off a revamped iLife this fall?

The upcoming iOS 7 launch shows Apple might quickly be catching up: The iOS camera now has some built-in filters to go along with the simple editing tools it already has, while the photo app groups your photos based on where and when you took them. And Apple has been expanding its social sharing services recently — it's possible we'll see Flickr or even Vine integration. There's also a big opportunity to streamline and unify iOS's camera and photos apps along with a new version of iPhoto — we'll see if Apple shows off a revamped iLife suite that meets the dramatic new iOS 7 aesthetic when it launches the new system this fall.