Last of the lepers: can a forgotten disease ever be defeated?

Last of the lepers: can a forgotten disease ever be defeated?

Why modern medicine still struggles to vanquish this ancient malady

Jose Ramirez was around 12 years old when he started suffering from fevers, numbness in his limbs, and sores that wouldn't heal. Over a period of eight years, doctors in Laredo, TX were puzzled by the mysterious affliction. It wasn't until 1968, when Ramirez was 20, that a healer in Mexico took one look at Ramirez and informed him he suffered from "a disease of the Bible." That disease was leprosy.

Once diagnosed, Ramirez was confined to a hearse for transportation to a leprosarium — better known as a leper colony — where he lived, largely isolated from his parents, siblings, and girlfriend, for seven years. "I was given a cocktail of drugs, one that made my skin turn black, another that acted as a sedative, and steroids that made me gain weight," he told The Verge. "Doctors really didn't know exactly how to treat [leprosy], so I was there during a period of a lot of experimentation."

Ramirez was eventually cured and discharged from the leprosarium. Now 65, he works as a consultant to the World Health Organization (WHO) and an advocate for leprosy awareness and research. "Leprosy continues to haunt the memories of those who have had it," Ramirez said. Unfortunately, he notes, many people in the developed world are under the mistaken impression that leprosy disappeared centuries ago. "For most, the disease isn’t even on their radar."

Indeed, though leprosy is today exceedingly rare in the US, its international toll might be surprising: an estimated 220,000 new cases of leprosy were diagnosed in 2011, according to the WHO. And because those figures rely on self-reporting, experts agree that they likely underestimate leprosy's actual prevalence. In some countries, for instance, the illness is still seen as a curse or a possession of one's body by evil spirits, so patients are reluctant to seek medical care for fear of being shunned from their community. "I would guess that we're looking at anywhere from 300,000 to 600,000 cases a year," says Bill Simmons, president of American Leprosy Missions, noting that the illness remains endemic in pockets of several countries, including Sudan, India and Brazil. "There's an idea of ‘oh, we've eliminated leprosy.' Well, we haven't, really."

Worldwide, the scourge of leprosy saw its first sharp decline at the end of the Middle Ages. Although experts have struggled to explain the phenomenon, research published in Science earlier this year, which analyzed the DNA of Medieval leprosy bacteria scraped from ancient bones, strongly suggests that humans developed robust resistance to the illness around the mid-1500s. Today, an estimated 95 percent of people are thought to be naturally immune to leprosy. 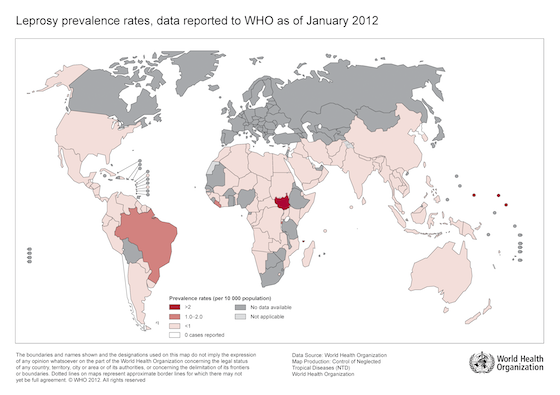 Among those who aren’t, the 1981 introduction of a multi-drug treatment regimen (MDT) was a breakthrough: patients need to take the drugs for six months to a year to cure the disease, but are no longer contagious soon after starting treatment. Officials with the WHO, which has since 1995 distributed MDT for free in endemic countries, credit that program with a marked decline in leprosy cases — from 800,000 new cases reported in 1995 to around 220,000 today. "With MDT, it is believed that we can eliminate the disease as a public health problem," said Dr. Steve Lyons, a program officer with the WHO’s Department of Neglected Tropical Diseases. "[But] we don’t have the tools to eradicate [leprosy] completely."

The debate over what those tools are has long been a contentious one, primarily oriented around a push by missionary groups — who, combined with NGOs, raise an estimated $80 million for leprosy work each year — to create a vaccine that would inoculate against the disease. That debate has become even more heated in recent years, as annual declines in leprosy cases have stagnated over the last decade. "Current drugs only treat the disease, they don't offer lifelong immunity and they don't eliminate long-term suffering when someone isn't treated quickly," Simmons, whose organization has been funding research into a leprosy vaccine at the Infectious Disease Research Institute (IDRI) since 2003, said. "To really eliminate leprosy, we need new tools."

A leprosy vaccine, however, isn't deemed worthwhile by some experts — in part because the necessary research to develop one is exceedingly difficult and might never be successful. The bacterium that causes leprosy, M. leprae, is nearly impossible to cultivate in-vitro, which makes testing vaccine candidates a long, expensive, and uncertain process. After a decade of research, scientists at IDRI are only now preparing to evaluate the toxicity of their vaccine in animal trials —meaning a viable vaccine for human patients is likely decades off. "It may never be achievable," Lyons said. "[MDT] is the best way, and maybe the only way, and thus forms the basis of WHO's elimination strategy for the disease."

There’s also a concern that missionary groups, who comprise the predominant segment of organizations doing leprosy outreach and research, are actually sustaining the disease — and their bottom line — instead of promoting established, effective treatment regimes. "[The groups] need to be more patient-focused, and not see leprosy control as a heaven-sent opportunity to serve God," Lyons said. While The American Leprosy Missions does dedicate 25 percent of their annual budget to treatment (and 22 percent to research, which includes vaccine investigations), Lyons notes that he finds the financial reports of leprosy nonprofits "opaque." In particular, he says that because the WHO provides MDT for free, "it is not clear what proportion of [their] funding is spent on earlier diagnosis and MDT treatment in the community."

For his part, Simmons admits that his organization’s goal is one grounded in Christian roots — but doesn’t see a problem with that. "Look, Jesus performed miracles for people with leprosy," he said. "We like the idea of performing, well, I guess you could call it the ultimate miracle." And as advocates like Simmons point out, preventing leprosy altogether would be preferable to treating it: getting MDT to the right people, in enough time to prevent disfigurement and transmission, isn’t easy. Leprosy bacteria can incubate inside a patient for 10 years before they show symptoms, and an unpredictable array of warning signs — numbness, rashes, congestion — often thwarts quick diagnosis. Experts suspect that leprosy is transmitted through prolonged close contact, possibly via nasal mucus, but they still aren’t entirely sure how the disease spreads. 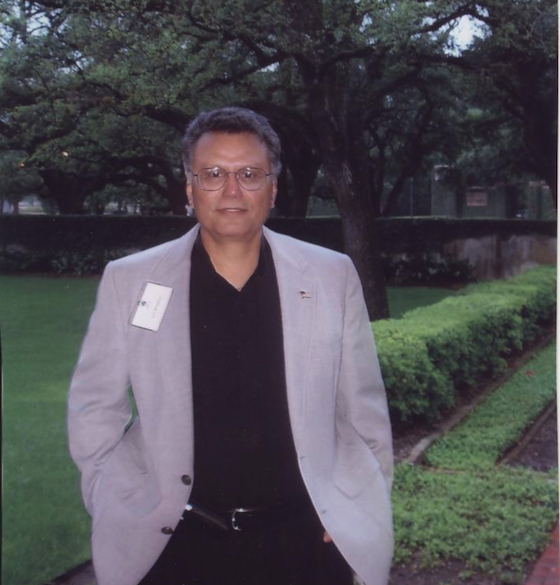 More than 30 years after his diagnosis, Jose Ramirez still suffers from some numbness and scars on his limbs. (Credit: Jose Ramirez)

On the importance of solving those puzzles, at least, both sides of the vaccine debate agree: whether or not an inoculation ever emerges, understanding how leprosy spreads and promoting earlier diagnosis are both key to curbing the illness’ stubborn prevalence. So too is awareness, Ramirez notes. "Misconceptions and fear of leprosy remain," he said. "People need to understand that the disease is not what they perceive it to be in their minds."

Keeping leprosy in the public eye — and making the disease a priority for researchers — hasn’t been easy, Simmons and other advocates said. But the risk of turning a blind eye, he adds, has the potential to be devastating. "If you take that attention away, you don’t realize the problem you’ve created in 10 years," Simmons said. "If we stop paying attention, we’ll see more leprosy — not less — in the future."