A floating pool has inspired the world, but will it sink before you can swim?

After going viral on Kickstarter and then disappearing, New York's +POOL is back

Share All sharing options for: A floating pool has inspired the world, but will it sink before you can swim?

In the summer of 2010, prominent designers, architects, and environmentalists around New York City received a small paper booklet in the mail filled with realistic renderings of a cross-shaped swimming pool floating between Brooklyn and Manhattan, filtering the polluted water of the East River through its walls. The cover read: "+POOL: A Floating Pool In New York For Everyone."

Within a few days, the +POOL project started getting attention from the press. The founders, a trio of New York-based designers, raised $41,647 through Kickstarter in the summer of 2011, which led to even more accolades from the likes of Jay-Z, TEDx, and mayors of cities around the world. Environmentalists and designers started referring to it as an example of the future of sustainable design. "This is a large, ground-up endeavor, but we hope to start getting into the water next summer," the founders wrote on Kickstarter.

But once the campaign closed, the buzz died down. The +POOL founders realized they needed more money and launched a $1 million donation drive in October 2011, which was a flop. Summer of 2012 passed; no pool.

The +POOL founders have support from a top-tier engineering firm and numerous city agencies. Experts say the seemingly impossible project is actually feasible. But the theoretical pool has no location, no final design, no permits, and no sustainable source of funding.

Archie Lee Coates, one of +POOL’s creators, shrugged this off. "If it was easy, somebody would have done it already," he said.

There isn’t much precedent in New York for a civic project as ambitious as +POOL, but all the comparable efforts faced enormous hurdles before succeeding. In 1999, urban planner Ann Buttenwieser partnered with design architect Jonathan Kirschenfeld. She wanted to build a floating pool; he wanted to build a floating 600-seat theater. They went with her idea. After facing challenges from cost control and natural disaster, they finally opened a seven-lane floating pool in Brooklyn in 2007, 27 years after Buttenwieser first started pitching it. Unlike +POOL, Buttenwieser’s pool is embedded in a mobile barge and does not filter river water.

The High Line, an abandoned railroad line that was converted to a public access park, took about 10 years to complete even with broad support from the public and wealthy patrons. Joshua David, one of the High Line founders, was one of the people who received a +POOL booklet. "His one piece of advice was, ‘If you go down this route, it will take forever,’" recalls +POOL founder Dong-Ping Wong. 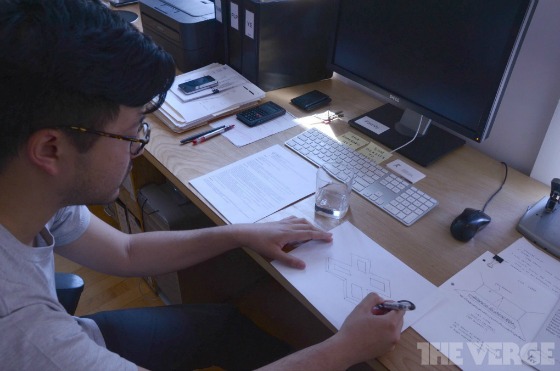 Dong-Ping Wong, one of the architects of +POOL.

It’s already been almost three years since Wong first conceived of the +POOL. Wong is a quiet, stylish San Diego native who gravitates toward eco-friendly community projects. He worked for two international design firms before launching his own architecture practice, Family. In the summer of 2010, Wong called one of his former coworkers, Jeff Franklin, who was now working with Coates at his own practice, PlayLab. The three met for coffee and decided to work on designs and branding for the impossible pool.

Although he was spending his own time and money working on the project, Wong wasn’t fully convinced it was real. "In the design field, 90 percent of your ideas wouldn’t be things you’d consider that seriously," he said.

That attitude changed when a call came in from Craig Covil of Arup, the design, engineering, and consulting firm that is currently building New York City’s newest subway line. "It was a clever idea, and I thought, ‘Well that’s who Arup likes to work with, clever young architects with clever ideas,’" Covil told The Verge. "Arup recognized the fact that the clever architects with the clever idea didn’t have any money. I basically just rang them up and said, ‘Fantastic idea, how can we help?’"

The +POOL also caught the attention of revered design firm IDEO, which is now consulting on the project. The mayor of Sydney has already called dibs on the second +POOL. London, Baltimore, Washington, DC, Tokyo, Sao Paulo, and Philadelphia have also expressed interest.

Arup completed a feasibility study for +POOL. The conclusion: the project was doable. It would cost around $21.5 million.

Kickstarter projects are aspirational by nature, and the best projects are often the most ambitious. Unfortunately, that also means that a lot of high-profile projects fall short of delivering on their promises. Kickstarter debuted new rules last fall requiring creators to fill out a section for "risks and challenges" but the temptation to gloss is still strong.

In all their branding materials, Coates, Wong, and Franklin chose to talk about the pool as if it were an imminent reality, auctioning off tiles in the completed pool and promising backers "first dips" during a VIP early access week. Their impeccable, photo-realistic renderings make theoretical aspects of the design seem concrete. One picture shows the pool resting in the water north of the Brooklyn Bridge, even though the location is up in the air; another shows a woman submerged in crystal-clear water, even though the +POOL water will probably retain a natural river tint. 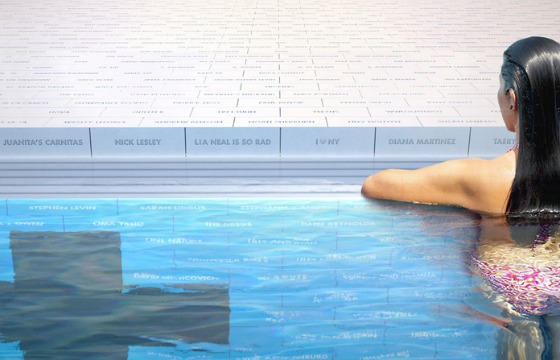 "I laughed when I saw this two years ago."

The elaborate fantasy contrasted with the reality of unfiled permits and uncompleted environmental impact studies inspires skepticism. "I laughed when I saw this two years ago," said Wade McGillis, a research professor at Columbia who studies pollution in New York’s waterways. "You’d think it’s a joke."

Dr. McGillis was recruited by Arup to help with water quality testing. The idea of putting a filter in the walls of the pool is key to the premise. It makes the water more attractive to pool goers, and it appeals to environmentalists because the pool will actually be cleaning the river bit by bit. Because of this, Arup and the +POOL creators consider the filter the first and most important hurdle. The $250,000 being raised on Kickstarter is earmarked for a 35-foot pool that will test four different filter combinations this summer.

Although there are some brave swimmers who don’t mind it, most New Yorkers would never think of taking a dip in the brown, murky waterways that primarily serve commercial traffic. New York City’s sewage system is designed so that when it rains, human waste often flows directly into the rivers, which raises the risk of E. coli infection and cholera, among other diseases.

In spite of this, New York’s waterways are cleaner than they’ve been in a century, thanks to federal environmental legislation and government cleanup efforts. The days when medical waste washed up on shore and New Yorkers talked about the "crunchiness" of the water are over. Furthermore, standards are much lower for swimming water than for drinking water. 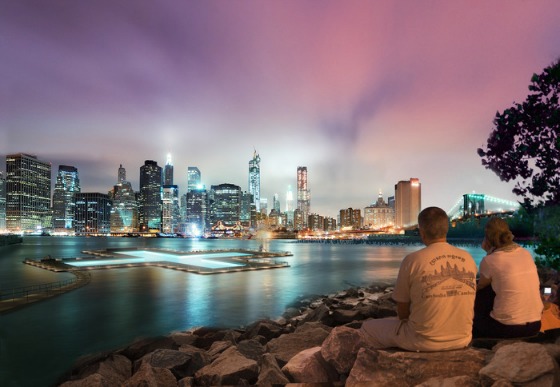 The founders of +POOL are measuring 19 different water quality metrics in the East River, but two are truly crucial. The first is bacteria from human waste. The second is eutrophication, which is a measurement of extra nutrients in the water that can lead to the release of carbon dioxide and methane and causes some plants to overgrow and others to decompose in the water.

The other metrics are things like turbidity, a measurement of how cloudy the water appears. Another example is pH, the metric for acidity. It isn’t much of a health issue, but a high pH will make the water feel slimy. "If you’ve ever swum in high pH water, it’s like swimming in laundry detergent," Dr. McGillis said. The team is also tracking salinity, temperature, and color, among other readings. Such factors could be considered nonessential, but they make a difference in whether people will want to swim in the pool.

Balancing all these factors in the +POOL will be a challenge. Furthermore, Wong is only "85 to 90 percent sure" that they’ve figured out which permits they’ll need at the city, state, and federal levels. The team must also prove that parking a floating pool in the water and blocking the sun for all the river life below won’t damage the river ecosystem. Liability insurance could also end up adding significantly to the cost of operation.

"Let’s be pragmatic about this: this is a step in a wish plan," Dr. McGillis said. "We do the same thing in science. It’s exploratory."

Still, he bought a tile.