At an SK Telecom event in Seoul today, company representatives took the wraps off the world’s first consumer LTE-Advanced network, and it is unbelievably fast. The new standard is the successor to current-generation LTE technology, supporting much higher data transmission speeds — we saw downloads topping out at 102Mbps. For comparison, that’s more than 10 times faster than the average home broadband speed in the US. SK Telecom says that the network supports even faster speeds up to a theoretical maximum of 150Mbps down and 37.5Mbps up, and it's providing the new service to customers without increasing charges. It's worth noting that other carriers have rolled out LTE-Advanced networking hardware before, but so far there haven't been any phones that take advantage of the new speeds. 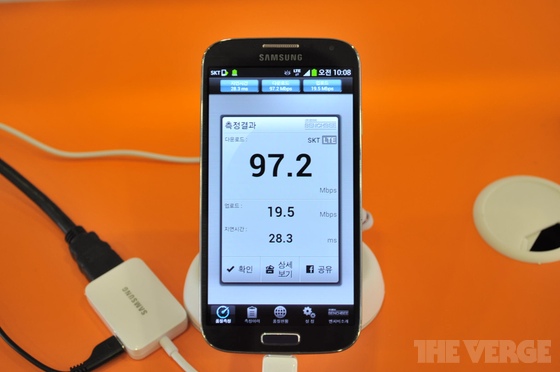 The company says it’s launching seven devices that support the new network by the end of the year, beginning with today’s launch of the previously announced Galaxy S4 LTE Advanced (above), which is available in both red and blue, with more colors on the way. The launch is undoubtedly a major step forward for mobile technology, but with much of the world just now rolling out LTE, it looks like those of us outside Korea are going to have a significant wait on our hands before we get a taste.

Hyunhu Jang contributed to this report