Windows 8.1: a first look at what Microsoft is changing

Share All sharing options for: Windows 8.1: a first look at what Microsoft is changing

Microsoft is taking over San Francisco's Moscone Center today to introduce a preview version of Windows 8.1. Although the company has revealed most of the features in the upcoming update to Windows 8, Iâve had a chance to get well acquainted with the Windows 8.1 preview to learn more about the changes involved.

In my previous look at 8.1 I summarized that the preview brings many small tweaks that make for a significant update, and that still stands. Microsoft is pushing a new search experience alongside UI tweaks, new and improved apps, and some better customization options for regular and power users alike. Let's dig in.

For even more on 8.1, check out our in-depth preview from last month.

Sticky TOC engaged! Do not remove this!
Interface

Make the Start Screen yours 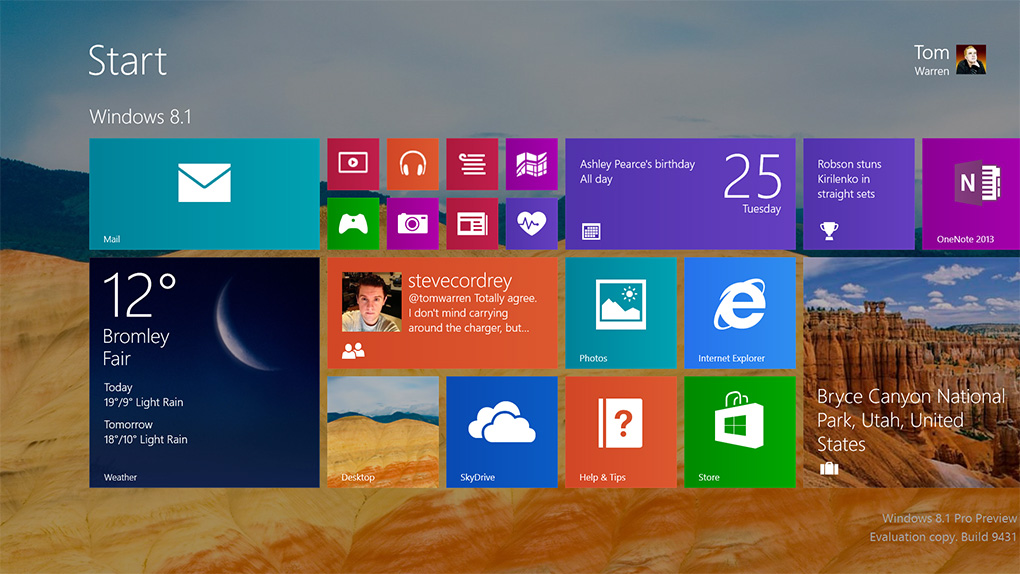 Hover over image to enlarge

Most of the changes in Windows 8.1 are visible straight from the Start Screen. New sizes of Live Tiles that offer more information or reduce clutter on screen, additional motion backgrounds, and the ability to set any image as the Start Screen wallpaper make for an improved and refined interface. The transition between desktop mode and "Metro" is a lot less jarring now, and there are even options to boot to desktop or set a new All Apps view as the default home page for the Start Screen.

Microsoft appears to be listening to its Windows 8 critics here, making 8.1 a more customizable experience that suits all needs. Altering the new Start Screen takes some getting used to if you're used to the old method, as you have to hold down on Tiles to move and change their size or position. It feels less intuitive than before, but it also prevents accidental swipes and movements so there's a tradeoff involved. The lock screen has also been tweaked to include quick access to the camera, the ability to quickly accept Skype calls, and a slideshow feature that pulls pictures from SkyDrive or the local PC. These features are minor, but good additions for upcoming 7- and 8-inch devices.

The controversial Start button returns to Windows 8, and if you want you can almost combine it with the All Apps view to create a Start Menu of sorts. The button is simply a visual element that takes you back to the Start Screen, but you can also right click on it and access power user commands and the shutdown or restart options. Its return should help ease one of the usability complaints around Windows 8, but it does very little to change the way you have to interact with the Charms or the recently used apps with a mouse and keyboard. Fortunately the hot corners can be disabled so if you want to totally avoid the "Metro" world then it's possible to do so without third-party software now.

Side by side, multi-monitor, Miracast 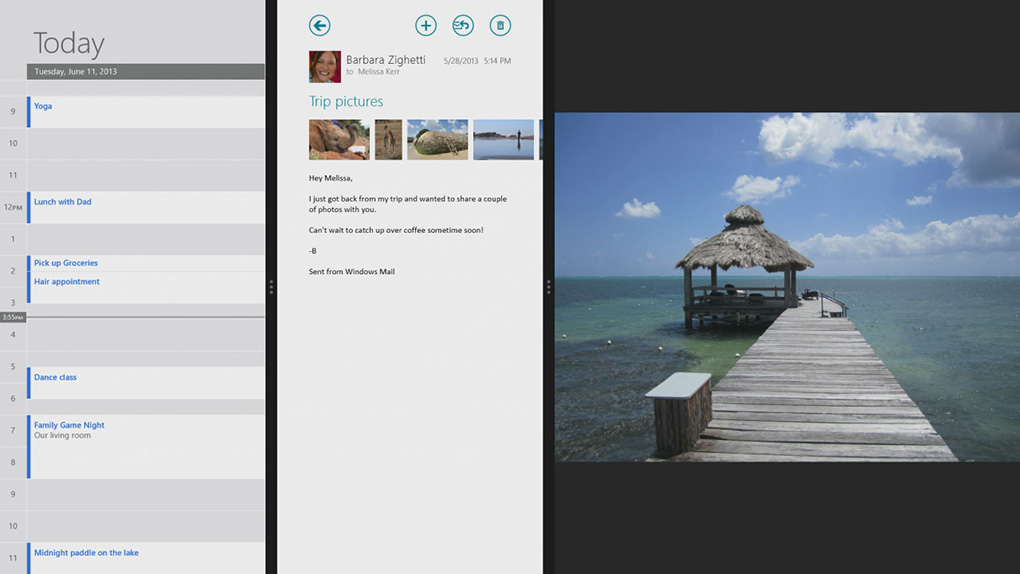 One of the biggest changes in Windows 8.1 is the ability to have greater control over snapped applications. In Windows 8 apps could run side-by-side, but it was rather limited with a roughly 30 / 70 percent split. Microsoft is altering this dramatically in Windows 8.1, allowing apps to snap in a new 50 / 50 mode. You can also change that percentage to better control how much of an app you see on screen. This means it’s possible to snap three, four, or more apps alongside each other. There’s a limit, but it’s based on the number of 500 pixel increments you can fit on a display. On 7- and 8-inch tablets, Windows 8.1 will support the 50 / 50 view in landscape mode, with the majority of improvements aimed at portrait mode and reading scenarios.

Multiple monitor support for Windows 8-style applications has been greatly improved in Windows 8.1. In our testing you can snap multiple apps across multiple displays and even extend a machine wirelessly to a Miracast-compatible display. Microsoft is supporting Miracast natively and it has surfaced as part of the Devices Charm with the project option. Snapping apps on multiple monitors is a little confusing, and dragging apps between monitors doesn’t always have the desired effect. I found that the Start Screen would often jump to the active monitor, making it tricky to arrange apps. Still, the support is welcome and it certainly makes Metro a lot more appealing on desktop and laptop computers without a touchscreen.

With Windows 8, you had to use the traditional Windows desktop Control Panel to adjust practically any important setting on the computer, and if you're a power user or find yourself troubleshooting computers often, that might still be the case. But for most tablet users, the new touch-based PC settings will probably be enough for most anything. It's still a bit of a mess of nested options as of the Windows 8.1 preview build, and you might be better off just searching for what you want, but if you're looking to change the screen resolution or how long the computer will sit idle before it goes to sleep, these new menus have you covered. 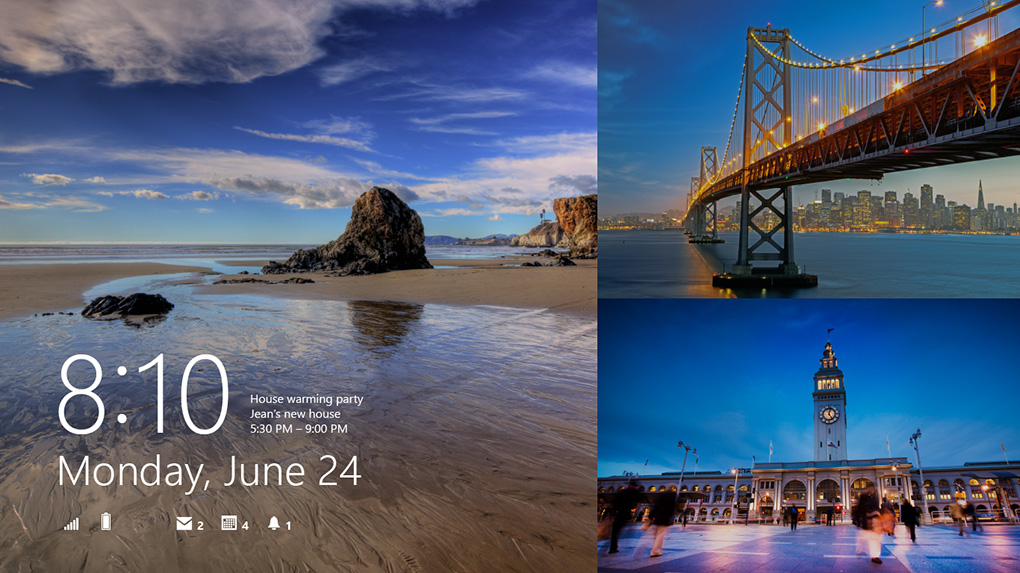 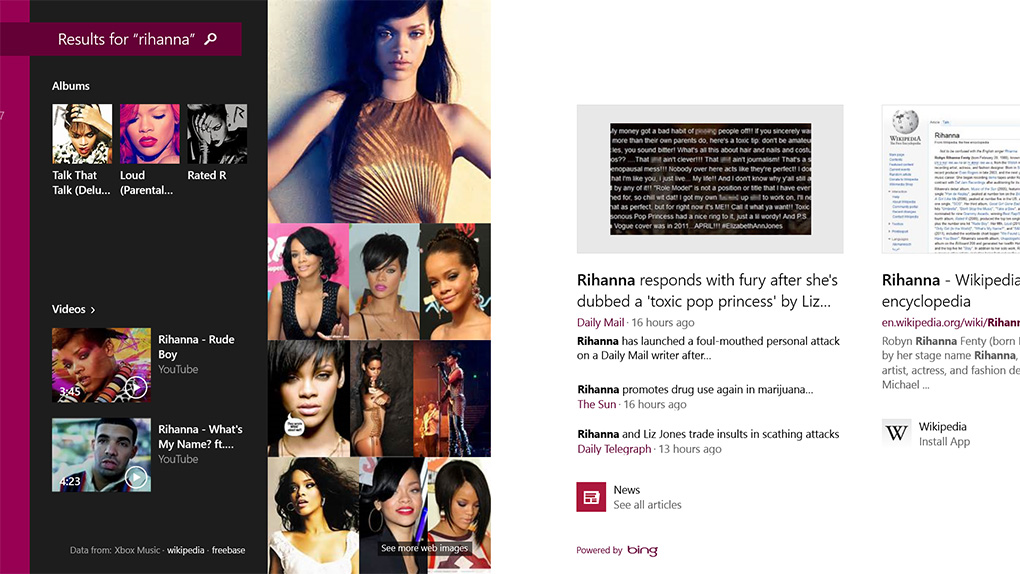 Search has been totally overhauled in Windows 8.1. Bing now powers the interface and underlying algorithms used to discover and fetch data from local PCs and the web. Microsoft has long been investing in desktop search, but it’s moved forward significantly in the 8.1 preview. You can simply type on the Start Screen and you’ll be able to instantly access web queries, recent searches, system settings, files, and other information. If you want to quickly launch an app then you can just type the first few letters and you’ll be presented with it. The search interface appears to favor apps over other content, but it also learns your search habits and adapts accordingly.

Perhaps the biggest change to search here is a new hero interface powered by Bing. If you search for an artist like Rihanna you’re presented with a full-screen interface that surfaces images, video, and audio content. It’s done so in a useful but stylish way and it will even retrieve data from applications. One particularly impressive part of this search interface is that it shows web links with a thumbnail preview of the site you’re about to click on. If you want to play audio from a particular artist then it jumps straight into Xbox Music, or it will find YouTube videos from the web that are relevant.

News is also presented, alongside key information from Wikipedia. The images can be expanded and viewed separately, and there’s even the option to filter them by color to find the exact image you need. Speaking of images, if you search for a location the new Search experience can even find pictures you may have taken there, surfacing them alongside web results. It’s clear Microsoft has put a lot of thought and effort into this interface, and it has paid off. 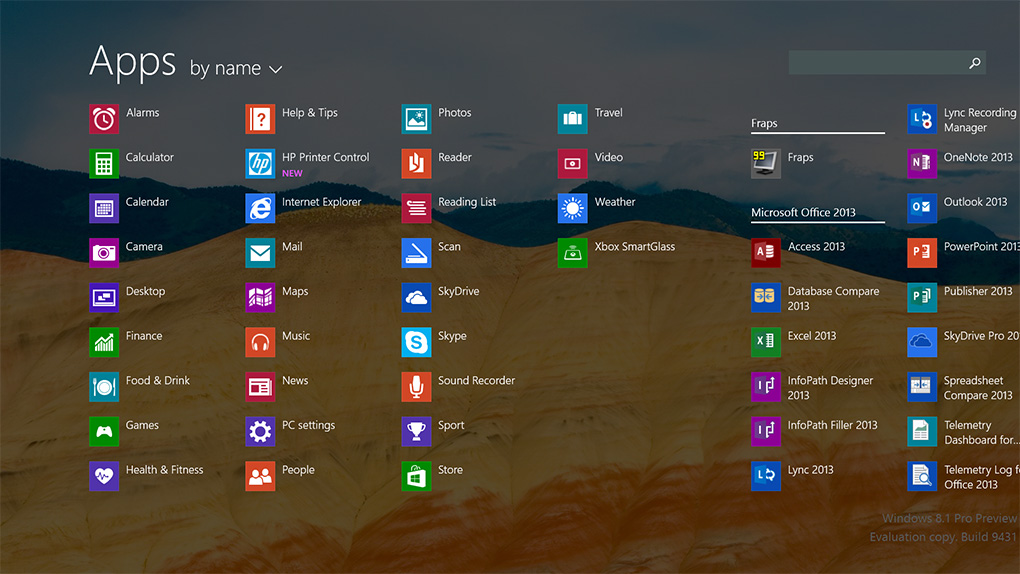 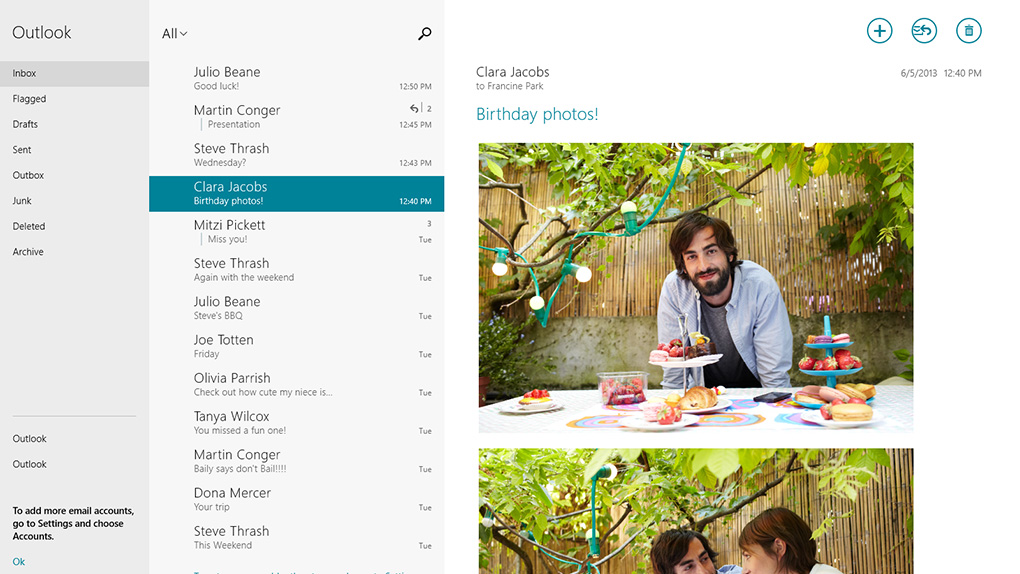 Most of the Windows 8 apps are being improved, but one that’s not part of the preview is the Mail app. The company is demonstrating some of the improvements it’s working on, including drag-and-drop support, sweep (which can remove large quantities of older unwanted mail) and the ability to group social and newsletters in one place. The Mail app is clearly starting to take shape into something that’s more usable and powerful to use over on tablets and even desktops. In the preview release the improvements aren’t ready, but Microsoft tells us an updated app will ship with Windows 8.1 later this year. One thing that does work well now is Mail's ability to pop open an app, side-by-side with Mail, to quickly view a web link or attached photo.

I also saw a brief glimpse of Windows 8-style Office applications which Microsoft is currently working on. Described as an alpha build, Microsoft was only prepared to show off a copy of PowerPoint running a presentation, but the suite should launch for Windows 8.1 tablets later this year. 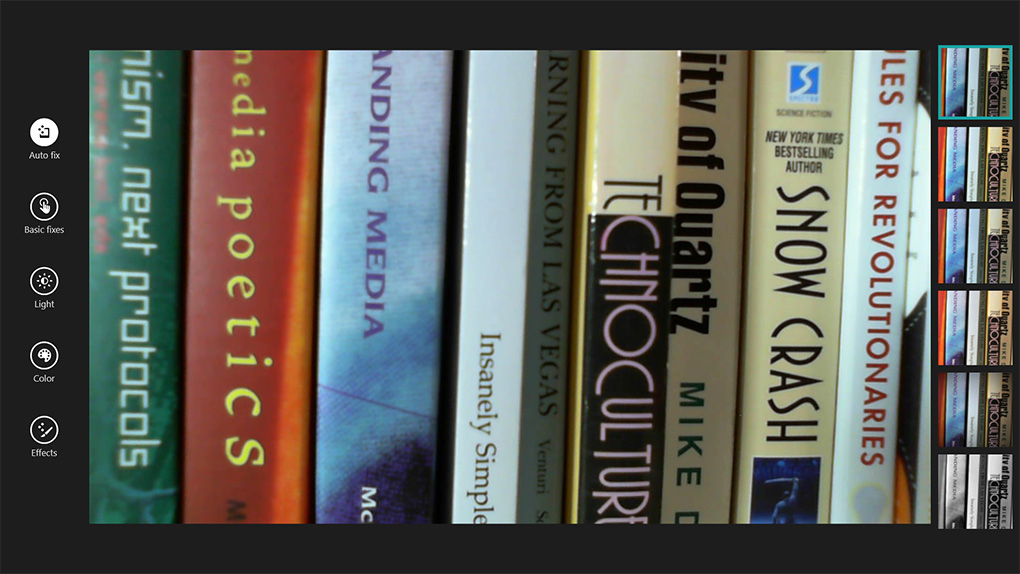 Microsoft has some pretty intriguing user experiences for snapping shots and editing photos in Windows 8.1. With Photosynth, part of the Camera app, you can take a whole 360 degree photosphere — an entire room floor to ceiling — just by moving the tablet around, as if each image is filling in the pieces of a virtual jigsaw puzzle. The Photosynth software stitches them all together, and the results are surprisingly good. Meanwhile, the Photos app lets you enhance or mute colors through a different circular procedure: you drop a pin on any spot, then rotate a radial dial (which reminds me of OneNote) to adjust the intensity. 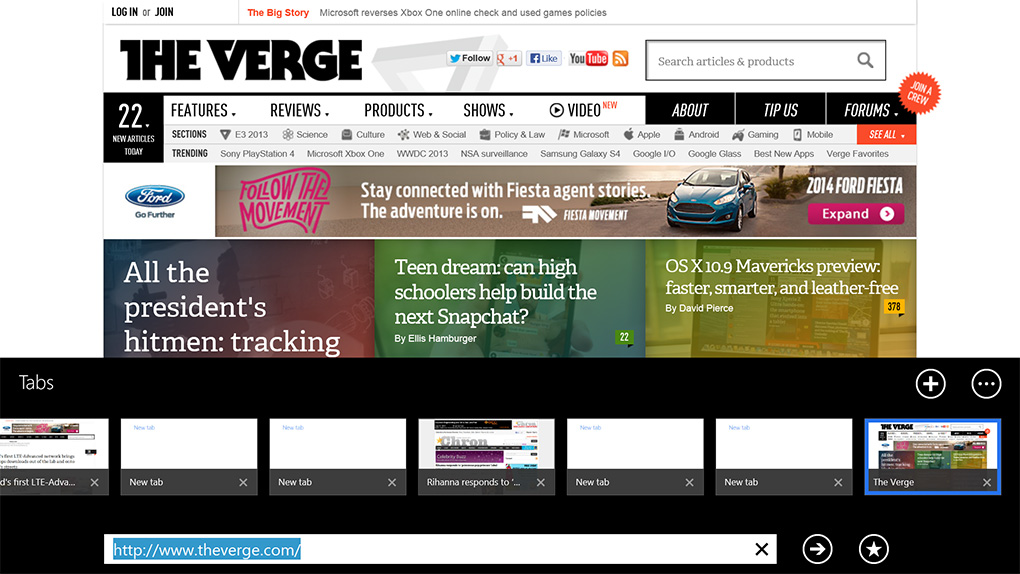 Internet Explorer 11 largely looks the same as its IE10 counterpart. The tab interface has been moved to the bottom, and Microsoft is catching up to the competition with tab sync across Windows 8.1 devices and Windows Phone. WebGL is also supported in Internet Explorer 11, and website owners can create separate Live Tiles that can be pinned to the Start Screen to access RSS feeds.

Unfortunately there are still separate desktop and Metro versions of IE11, and the tabs don't appear to keep in sync between the two. It's an odd disconnect given Microsoft's focus on cloud syncing in 8.1. IE11 will also detect phone numbers on sites so you can call them using apps like Skype, and the app fully supports the new Reading List feature that will let you bookmark web pages for later reading. 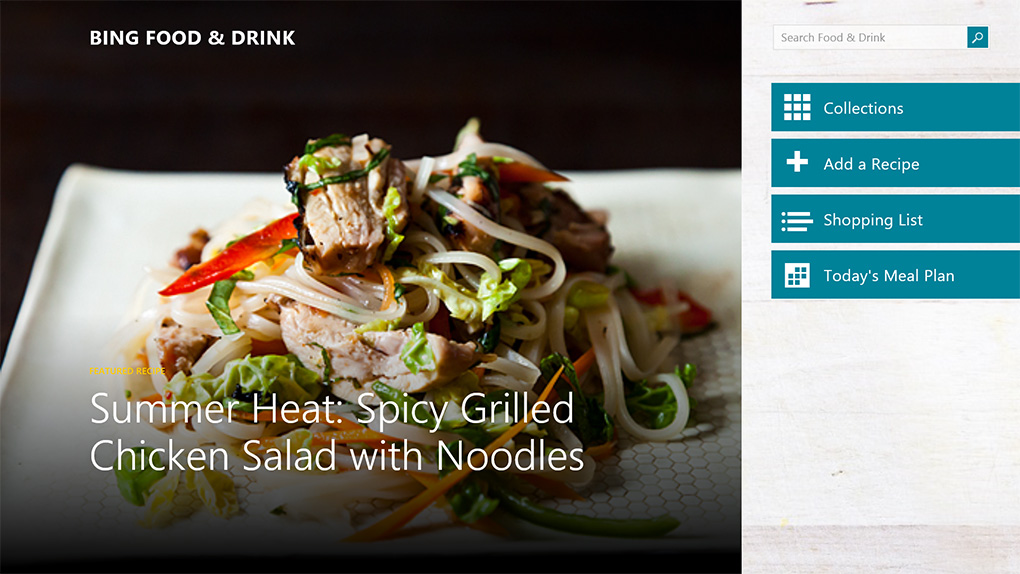 Right out of the box, there are a number of new apps in Windows 8.1. Metro-style versions of Alarms, Calculator, and Sound Recorder are all available and the company is also adding Bing Health & Fitness and Bing Food & Drink. Bing’s Food & Drink app is perhaps the most interesting addition. Designed as a recipe book, it includes a unique hands-free mode that lets you swipe between recipe notes to avoid touching a screen with messy fingers. It simply uses a webcam and it will be interesting to see whether this makes its way into additional Windows 8.1 apps.

Microsoft is highlighting its redesigned Xbox Music client with 8.1, but the improvements are actually fairly minor. The initial layout is improved with more immediate access to your songs and albums, but the interface when you’re viewing songs is unchanged. Microsoft is offering non-subscribers access to a radio feature that lets you search for artists to get recommended songs. Microsoft also showed off a feature where you can invoke the Share charm from a website listing musical artists to quickly create a playlist of their songs, though it didn't seem to be available in the preview build. A web-based version of Xbox Music will also debut next week to provide access to the service from non-Microsoft devices. 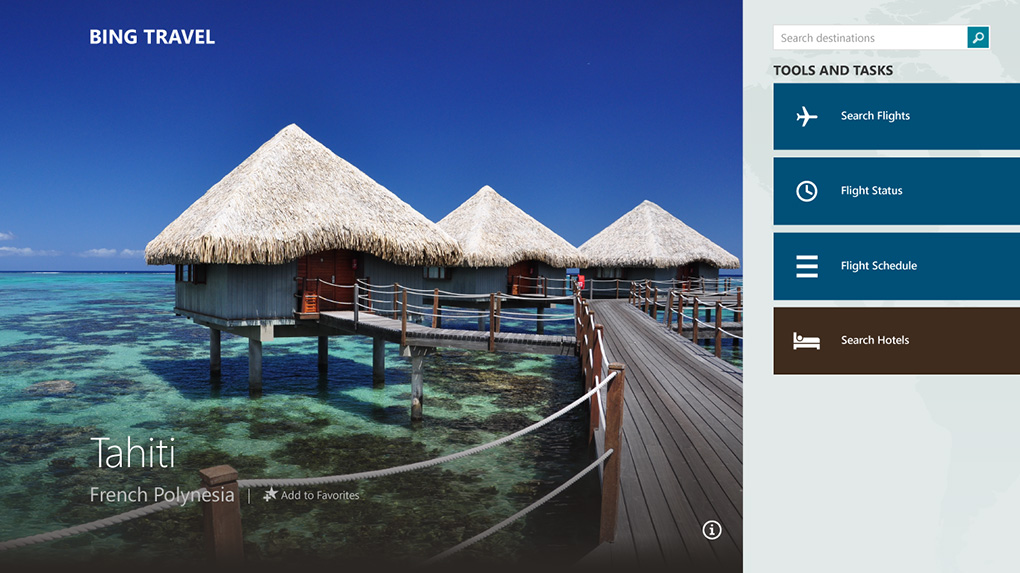 As I said back in May, Microsoft has taken the right approach with Windows 8.1. It has recognized its operating system's weakest points and addressed the issues. No, it's not an update with many stand-out features, but it represents a real refinement of what was already a strong OS. All of Microsoft's tweaks have made big improvement in usability, especially for users waiting to switch from Windows 7 or Vista.

Editor markup for Windows 8.1 Preview screenshots. This is only visible in the story editor.

I've found Windows 8.1 to be quite unstable in my time with it. Obviously, that's to be expected with pre-release software, but you might want to think twice before installing the preview on your main machine. It's available from Microsoft's preview site here.

Read next: Windows 8.1 preview: many small tweaks make for a significant update

Images and layout by Aaron Souppouris

All the news from Microsoft's 2013 Build developer conference

Samsung’s next tablet lineup could include a 14.6-inch ‘Ultra’ model with a notch

Wordle! and Wardle team up to donate proceeds from an unrelated app’s popularity spike