An upstart company's deal with Stratasys won't put a 3D printer in every home, but it could open up new frontiers

A painted rubber "face" and appendages printed from a high-end Stratasys machine.

Last week, the new and old guard in 3D printing joined forces as Stratasys, an industrial 3D-printing behemoth, announced that it had acquired upstart printing company MakerBot. A press conference after the announcement drove home the odd-couple pairing: buttoned-down Stratasys CEO David Reis gushed over being called "cool" by MakerBot head Bre Pettis, and Pettis reminisced about building a 3D printer out of plumbing parts. "We'd never seen a 3D printer," said Pettis. "We didn't have access to a 3D printer. But we just thought they were the coolest things."

By merging, the two firms could bridge a gap that’s grown between $100,000 professional Stratasys machines and the simple $2,000 Replicator Makerbot has made famous. It’s a combination of deep technical knowledge with a burgeoning consumer brand that might open up the market for mid-priced printers sold to schools and businesses.

MakerBot grew out of the often fiercely independent "desktop" printer movement, which has focused on getting 3D printers out of R&D labs and into garages and small offices. Pettis — who once said he regretted "giving away part of the company" to investors because Kickstarter was not yet available — stressed that the company would remain the same, pointing to a placard emblazoned with the newly codified "MakerBot Way" and offering to give visitors smaller printed copies.

"The reason the desktop machines emerged four years ago is because the first round of patents expired."

When asked what Stratasys could provide beyond money, Pettis cited "materials and expertise," and Reis noted that one of Stratasys’ biggest strengths was the hundreds of patents in its portfolio. The question of patents and technological development looms large in the printing industry. "The world of 3D printing is really bifurcated between established companies with five- or six-figure machines that have been around for the last 20 years and the desktop machines that have emerged in the last four years," says Michael Weinberg, who has written extensively about 3D printers for the advocacy group Public Knowledge.

"The reason the desktop machines emerged four years ago is because the first round of patents expired." Since then, MakerBot and other companies have been able to build on techniques pioneered by Stratasys and others, but they risk bumping up against new patents that have been filed over the past two decades. 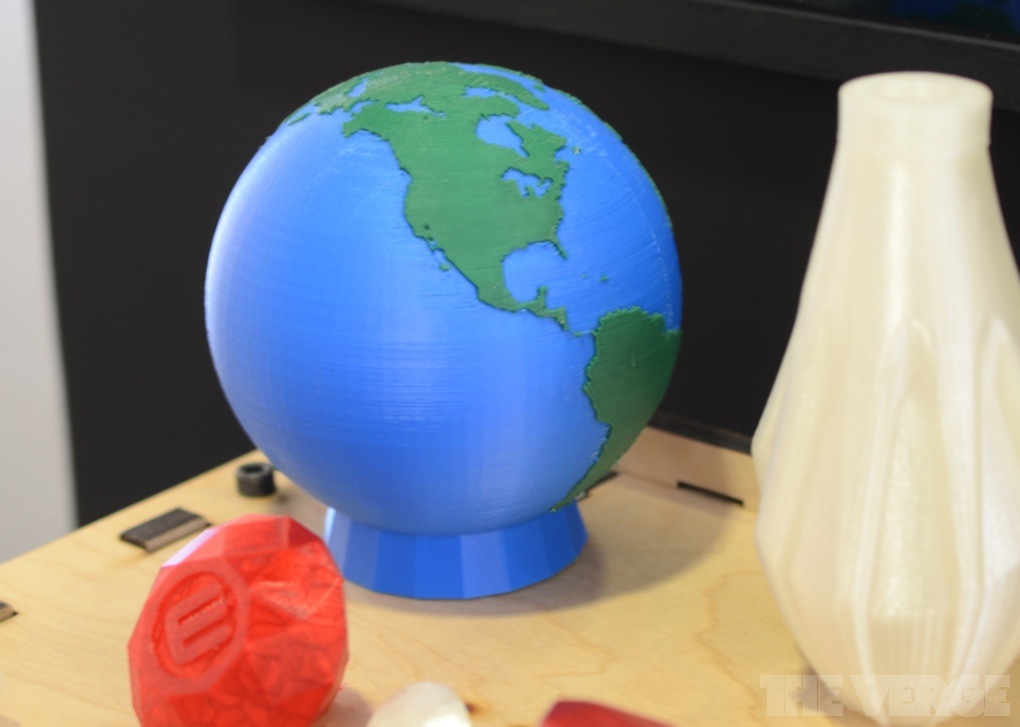 Because of this, a merger with Stratasys could make MakerBot printers more versatile without pushing the price upwards. Phil Reeves, managing director for 3D printing consulting firm Econolyst, believes that MakerBot could build a dramatically more reliable printer by using better support materials and a fully enclosed design that Stratasys patented. "These things fail on a very regular basis, and quite often they fail because they're incapable of printing the things that people throw at them," he says.

More generally, MakerBot could also move beyond the materials most printers use — to things like conductive plastics. "ABS and PLA plastic can do a lot of things; they can't do everything," says Weinberg. With the latest technological advances, "you can't print a microchip or a cellphone, but you can print basic circuits with your home 3D printer."

The question, though, isn’t just what a new generation of 3D printers could do; it’s who they’re for. "I don't think in the next five years we'll see everybody have a 3D printer at home like they have a computer at home. There are a lot of barriers," says Weinberg "But I think we will see a situation where many people have reasonably easy access to a 3D printer, whether that is one around the corner or virtually around the corner."

"ABS and PLA plastic can do a lot of things; they can't do everything."

Printers are already seen as a way to teach basic design concepts in a tangible way, and schools could reap the benefits of a more flexible machine "It’s a really good gateway to teaching traditional STEM things … being able to think about something on a computer screen in a virtual 3D world and see it in the real world, and hold it and touch it and learn how to iterate designs, is something that makes a lot of educators really excited."

Along with schools, Reeves thinks that making 3D printers more reliable would also make them a better fit for either startups or larger companies that want to experiment. Right now, he says, the thought process runs: "I'm going to design the object that I desire, and if it fails on the 3D printer, I'm probably not going to change it to be 3D printed." But an affordable printer that behaved more like an industrial one could "open up opportunity space to putting these on the desktop of every engineer."

Some enthusiasts will espouse the idea of universal access to printing, evoking the idea of a post-scarcity future where everyone can make what they need. "I would love to see a Solidoodle in every home in the world," says ex-MakerBot COO Sam Cervantes, who launched his 3D printing company Solidoodle in 2012. Adrian Bowyer, founder of the open source RepRap printing project, doesn’t worry about trying to create a set path for 3D printing’s development, but he emphasizes the importance of getting a critical mass of people involved: "If you really want to change the way that humanity and its society works, you need to get right down to the individual level rather than working at the merely industrial level."

"If you really want to change the way that humanity and its society works, you need to get right down to the individual level."

But Reeves thinks most people don’t really want or need a 3D printer. It’s easy, he says, to see it as a Star Trek replicator, printing consumer goods on demand. But even a $100,000 Stratasys machine can’t do that, let alone a $2,000 MakerBot or $500 Solidoodle. "The concept of a 3D printer in everyone's home comes with the idea of a utilitarian item that everyone requires. And I am just struggling with that," he says. "Until you have desired content, there really is no need for one in everyone's home … These are single-material, pretty simplistic printing machines." 3D printers matter because they can let people with "creativity and skill and talent" realize their dreams or get better at their jobs, he says, not because "everybody needs [a printer] because we can't live without one."

MakerBot and Stratasys’ merger won’t be completed until at least the third quarter of 2013, and neither company has disclosed any future plans. Regardless of where the move takes MakerBot, 3D printing has already become an indispensable part of the commercial design and DIY hobbyist communities. Weinberg credits 3D printing with helping to spur the hardware startup boom that’s become evident over the past year, and Reeves says new materials (including ABS plastic infused with wood or brick dust) open up more options for printing prototypes. Solidoodle was built as a cheap 3D printer for the broadest possible user base, but Cervantes says it’s still frequently used by designers who "probably have a really high-resolution 3D printer locked away somewhere but ... can keep this on a desk and prototype quickly and inexpensively."

Despite this, the promise of desktop 3D printing remains that we’ll find something new to do with it that nobody could have imagined — and that advances in technology will make that more likely. "Ultimately, we don't know and we can't know what people are going to end up using them for," says Cervantes. "When the iPhone came out, who knew that Angry Birds would be the killer app? Similarly, we don't know what the killer app for the 3D printer will be." And Bowyer cites strange, seemingly frivolous projects (including printed seashells that were dropped into the ocean to "solve the housing shortage for hermit crabs") as a sign of 3D printing’s strength. "It means it's cultural rather than maybe utilitarian," he says. "When something transcends that and becomes a medium of expression, which is what we're seeing now, then the nature of human society is that it's sort of really arrived."