Share All sharing options for: Brain-eating amoebas thrive in US lakes as global warming heats waterways

It’s a fatal infection without an effective treatment, and one that strikes in a decidedly gruesome manner: An amoebic organism lurking in water is inadvertently inhaled during a swim on a hot summer’s day. From there, it travels through the nasal passage and into the brain, where it multiplies, devours one’s cerebral fluid and gray matter, and almost invariably causes death.

These "brain-eating amoebas" — known to doctors and scientists as Naegleria fowleri, or N. fowleri — aren’t believed to kill often. In the US, researchers estimate that between three and eight people die from N. fowleri disease, commonly referred to as PAM (primary amebic meningoencephalitis) each year. But that might not be the case for long. In recent years, N. fowleri has popped up in unexpected locations, which some experts suggest is a sign that warmer waters — caused by brutal summer heat waves and rising temperatures across the country — are catalyzing their spread.

"The climate is changing, and let me tell you, so is this," says Travis Heggie, an associate professor at Bowling Green State University who’s tracked the amoebas for several years. "If warm weather keeps up, I think we’ll see N. fowleri popping up farther and farther north."

That speculation seems to be reinforced by recent cases of PAM, once a health woe confined to fresh water in southern states like Texas and Arizona. In Minnesota, public health officials were stunned to see two fatalities caused by N. fowleri — both young children — in 2010 and 2012. The cases are the only in state history, and occurred about 550 miles farther north than any previous reported PAM fatality in the US. The amoebas have also recently killed swimmers in Kansas and Virginia, both states where earlier infections have been exceedingly rare. "You could certainly say it’s a concern of ours," said Jonathan Yoder, an expert with the CDC’s division of parasitic diseases, about the seeming progression of N. fowleri to colder regions. "We’re still trying to understand this."

"An accurate diagnosis is basically serendipity."

Victims of PAM are typically young men, who take in the amoeba when they dive or splash around in rivers, lakes, or swimming pools that haven’t been properly chlorinated. And in two separate 2011 instances, individuals died of PAM after using neti pots filled with contaminated tap water to rinse their nasal passages. The amoeba doesn’t cause health problems when ingested orally — stomach acid kills the organism — so a patient can only fall ill if they’re taking water up the nose. Once they do, however, a single amoeba is enough to yield disastrous consequences: individuals usually feel fine for around a week, but then experience a puzzling array of symptoms, including headaches, vomiting, and confusion. That incubation period, combined with relatively common symptoms and the rarity of the infection, make accurate diagnosis exceptionally hard. "It’s not something that’s necessarily touched on in medical school," William Schaffner, a professor of preventive medicine at Vanderbilt University, said. "You have to really probe what patients were doing in the last several days, you have to ask if they were swimming. Honestly, an accurate diagnosis is basically serendipity." 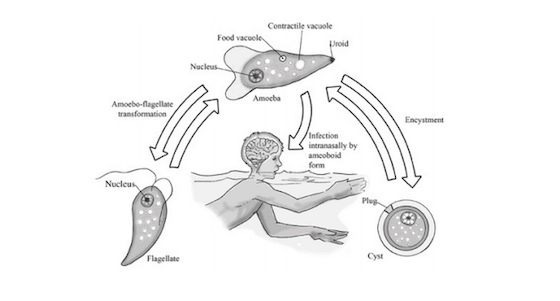 This diagnostic challenge is one factor that helps explain why N. fowleri is accompanied by a 99 percent fatality rate — since 1962, there’s only one documented case of a US patient surviving PAM. But researchers also note that there’s no tried-and-true treatment. Patients are often beyond saving by the time they’re diagnosed, so the existing protocol, a cocktail of antifungal and antibiotic drugs, simply hasn’t been used on enough people to know how well it works. "That’s very frustrating for us," Yoder said. "Did the treatment only work that one time? Does it work at all? Would other treatments work better? We just don’t know."

"In other brain infections, with different amoebas, we have seen it work."

Right now, experts at the CDC are working to resolve that problem — and better establish where N. fowleri might emerge in the future. Earlier this month, the agency received FDA clearance to import and stockpile miltefosine, a breast cancer drug that kills off N. fowleri in lab tests. "It’s certainly worth a shot," Yoder said. "In other brain infections, with different amoebas, we have seen it work."

The agency is also collecting environmental data on each case of PAM, in an effort to one day issue "targeted warnings" based on weather and water conditions that make the proliferation of N. fowleri — and subsequent infection — more likely. "We want to know what the water temperature was, whether there was a heat wave, what were the humidity levels," Yoder explained. In an ironic twist, however, PAM’s rareness makes such research much more difficult. "If you had thousands of observations, it would be much easier to do this," Yoder said. "Obviously, we’re short on data."

Doctors may have misdiagnosed patients who actually died because of N. fowleri

Heggie, for one, also suspects that PAM is already much more common that experts think. In his own research, he says he’s found N. fowleri in some surprising spots, including water far below 86 degrees — widely perceived as the cut-off point beyond which the amoeba thrives. And because the symptoms of PAM are similar to those of bacterial meningitis, Heggie also cautions that doctors may have misdiagnosed patients who actually died because of N. fowleri. "I’ll swear my life to that — this is being wrongly diagnosed," he said. "If someone died of meningitis, I’d suggest looking into that case a little more closely ... and looking at where the brain was eaten away at." Little research has examined the issue, but one 1970 study out of Virginia examined 16,000 meningitis deaths and found that five of those were actually caused by PAM.

Short of avoiding fresh water swims altogether, public health officials recommend plugging one’s nose during dives or periods underwater. Tightly. "You don’t need water gushing up there to get sick," Heggie said. "It doesn’t take much more than a drop."

Read next: The electrified brain: the power and promise of neural implants