British Airways will introduce reusable luggage tags with Kindle-like e-paper displays next year. After checking in online, passengers will be able to use the BA app to create a luggage tag for their journey. The app isn't available to the public yet, but it currently utilzes NFC to beam the necessary data down to the tag, updating its e-paper display. At launch, the tags are unlikely to use NFC, as BA wants to make them compatible with all smartphones.

The tags, which were first noticed by Engadget, were developed in tandem with consultancy firm Designworks, but the design hasn't been finalized yet. British Airways is handing out the tags to employees for a three-month trial starting next month. After the test period, the company will finalize the design — likely switching the NFC tech for something more standard like Bluetooth — before launching the Bag Tags at some point in 2014. British Airways' PR Manager Michael Johnson tells us that the company chose this system as it's easy to integrate into existing airport infrastructure. Other companies, such as Airbus, are experimenting with high-tech baggage trackers with built-in GPS and mobile connectivity, but Johnson says British Airways didn't see the benefit of such tags, given that GPS and mobile devices have to be switched off in transit. Instead, BA is focused on reducing the time spent at airports — it estimates passengers will be able to drop their bags off in just 35 seconds using the new tags. 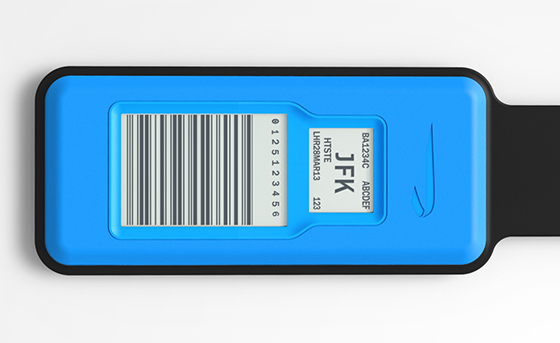