The haze may linger for months, but the political fallout could drag on well after the smoke clears

A firefighter braves the smoke caused by the forest fires in Riau Province, Indonesia. Photo provided courtesy of Greenpeace.

In the seven years since he moved to Singapore, Ted Utoft had never seen the city look the way it did last week. With forest fires raging in nearby Indonesia, thick clouds of haze and smog descended upon the Asian metropolis, blanketing skyscrapers, fogging streets, and leaving many Singaporeans in an uneasy state of house arrest.

"I mostly stayed home from Wednesday evening through Sunday morning," Utoft, 31, wrote in an email to The Verge. The Minnesota-raised expat did venture outdoors for a brief time on Friday, only to realize that he was somewhat out of place.

"I felt like I was the only person without a mask on."

"I felt like I was the only person without a mask on."

Last week, Singapore's Pollution Standard Index (PSI) peaked at 401 — a point where simply breathing becomes potentially fatal for the sick or elderly, and far higher than the country's previous record of 226, seen in 1997. Schools were closed, deliveries came to a halt, and protective masks were flying off hospital shelves.

The smog finally began clearing away from the city earlier this week, when Indonesian emergency workers waterbombed the Sumatran fires that caused this year’s miasma. The most noxious clouds have since drifted northward to Malaysia, and experts warn that the haze could linger throughout the region for weeks, if not months.

The political fallout could drag on for even longer. The past week has seen a spate of finger-pointing and name-calling in Southeast Asia, with politicians in Singapore and Indonesia blaming each other for the crisis. Yet the debate on both sides of the strait has come to center upon one industry in particular: the booming palm oil business, and the forest-ravaging plantations that underpin it.

"No country or corporation has the right to pollute air at the expense of Singaporeans' health."

Derived from the pulp of oil palm fruits, palm oil is widely used in food products, cosmetics, and even biofuels. The market has grown dramatically over the past decade, with Indonesia and Malaysia accounting for more than 80 percent of global production. The industry has been an economic boon for the region, but its rapid growth has put forests and wildlife in peril, as corporations continue to raze large swaths of land for palm oil plantations — in some cases, with fire.

Indonesian law expressly forbids clearing land with fire — the centuries-old "slash-and-burn" agricultural technique — but activists say these regulations are only loosely enforced, making it easy for corporations and their suppliers to flout them. It's for this reason that the Singaporean government lashed out at Indonesia last week, blaming its neighbor for failing to crack down on the slash-and-burn land clearers accused of causing this year's smog.

"No country or corporation has the right to pollute air at the expense of Singaporeans' health and well-being," Dr. Vivian Balakrishnan, Singapore’s environment minister, said in a statement posted to his Facebook page. 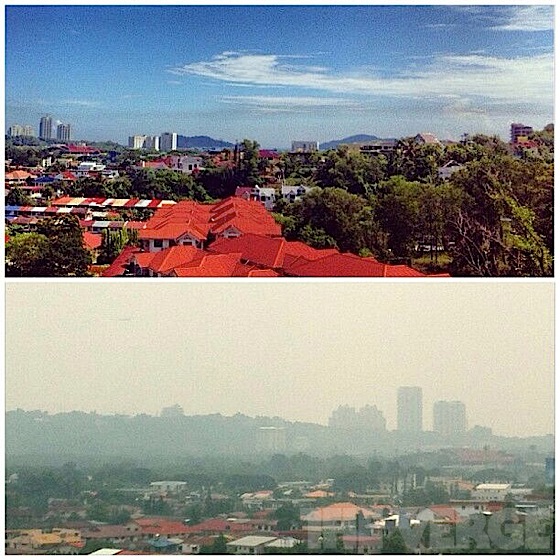 A view of Sabah, Malaysia before (above) and after (below) this year's smog crisis

After several days of vitriolic back-and-forth, Indonesia toned down its rhetoric and apologized to its neighbors, with politicians calling for an investigation. On Friday, Jakarta singled out eight companies accused of starting the fires in Sumatra, including two based in Singapore: Sinar Mas, a conglomerate that operates palm oil plantations in the region, and Asia Pacific Resources International (APRIL), a pulp and paper company. This week, authorities arrested eight farmers on charges of setting fires, though it remains unclear whether they have ties to palm oil plantations.

According to an Indonesian government spokesperson, there are 17 timber companies and 15 palm oil companies operating in Sumatra's Riau province — the epicenter of this year's blaze — though many have denied wrongdoing.

Last week, Greenpeace said it identified hundreds of fire "hotspots" in areas owned by Indonesian, Malaysian, and Singaporean palm oil companies, based on satellite imagery gathered by NASA. The advocacy group urged the industry to adopt a zero-deforestation policy, though experts say assigning blame may be difficult, if not impossible.

"There's no smoking gun when it comes to forest fires."

"There's basically no smoking gun when it comes to forest fires," Krystof Obidzinski, senior scientist at the Center for International Forestry Research in Indonesia, said in an interview with The Verge.

Satellite imagery can help identify the areas where fires break out, but it remains difficult to determine who actually sparked them. They could be linked to large paper or palm oil corporations, but they could just as easily have been started by small-scale farmers.

"The government makes efforts to educate people and reason with them to limit the use of fires," Obidzinski explains, adding that farmers in the region have been using slash-and-burn techniques for centuries. "But it's next to impossible to actually monitor subsistence farmers. There's very spotty monitoring, and very spotty enforcement."

In Indonesia, anyone convicted of setting illegal fires can face up to 10 years in prison and a fine of 5 billion rupiah ($503,000). But activists say these rules are rarely enforced, whether due to corruption or the fact that Indonesia may not want to restrict a thriving domestic industry. 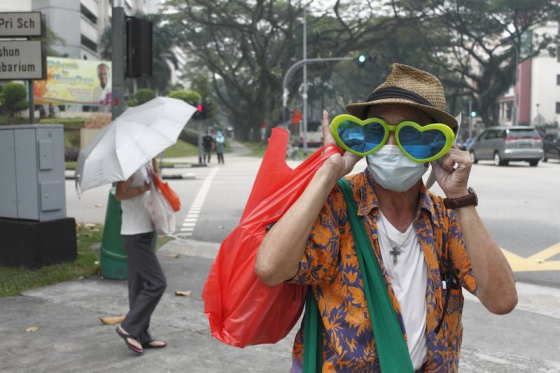 A man in Singapore wears oversize glasses over his protective mask. Photo provided courtesy of Greenpeace

It's equally difficult for regulators to trace crude palm oil from supplier to corporation. The Roundtable on Sustainable Palm Oil (RSPO), an international industry group, was launched in 2004 to ensure environmentally friendly practices among palm oil producers. Although RSPO members commit to sourcing their crude palm oil from sustainable plantations, the convoluted nature of the supply chain can make it difficult to adhere by (or easy to evade). This week, the organization launched an independent probe into five of its member companies operating in Sumatra, including Sinar Mas.

"A company might have a strong public commitment, but if they're getting their supply from hundreds of small suppliers, there's definitely a problem tracking where that's all coming on," says Linda Walker, a forestry expert at the World Wildlife Fund.

Similar crises broke out in Singapore and Indonesia in 1997 and 2005, and many in the region have come to accept more moderate levels of haze as a yearly ritual. But this year has been particularly severe, due to unusually dry conditions and strong winds. Experts fear the smog may linger for a long time afterward because most of the fires have erupted over deep, carbon-rich peat lands that can smolder for extended periods.

For the moment, emergency workers face the imperative task of extinguishing Sumatra's fires before they spread further. In the long run, though, activists hope this crisis will finally provide the impetus needed to bring about stronger regulations on land clearing.

"I wish I could say I’m optimistic."

"It's terrible that it has to come to this," Walker says. "But I think that greater international attention to the smog, combined with the Indonesian government's commitment to reduce carbon dioxide emissions, could result in a leap forward."

But with global palm oil demand showing no sign of slowing down, some are worried that once the smoke clears, Indonesia's economic incentives will continue to outweigh environmental concerns.

"I wish I could say I’m optimistic, but honestly I’m a little skeptical," Obidzinski says. "Some companies may face prosecution or penalties, but Indonesia has always been reluctant to clamp down. I don’t expect any dramatic change."