The next-gen console might run Windows, but devs aren't being told how

For four years now, Microsoft has been telling us that the future would be Windows, running across "three screens and a cloud." Now that Windows 8, Windows Phone, and the Xbox One are all being built on top of the same common core, we expected the company would have more to share about the realization of that vision at this week's Build developer conference. Developers need to know how to create, port, and publish apps and games across all three platforms, and Microsoft needs those developers to give its new platforms momentum and staying power. At Build, we were particularly optimistic to hear whether the Xbox One and Windows PCs might share code.

Xbox One under lock and key

Unfortunately, Xbox has no real presence here at Build. It's on display on the show floor, but it's under lock and key with a dedicated security guard. There are no developer sessions devoted to creating Windows apps or games that could appear on Xbox One, or that address whether the Xbox and Windows might share a store. Microsoft employees we approached couldn't speak to how these things might work. Even sessions with promising names like "Beautiful Apps at Any Size on Any Screen" were completely focused on computer screens, not televisions. And though the Xbox One's new Kinect sensor is now coming to Windows computers, there was no suggestion that the peripheral would necessarily allow the Xbox and a Windows computer to play the same games this time around.

During the Wednesday morning keynote, there was one auspicious moment when we thought that Steve Guggenheimer, Microsoft's VP of developer evangelism, was going to address the topic. "One of the questions that I get from developers quite often is 'How do I think about targeting the Xbox platform? It's a curated platform, I can't just go and host it up there,'" related Guggenheimer. However, Guggenheimer didn't go on to actually address that question at all — only hinting that devs might be able to get a "head start" on Xbox apps by building Metro-style apps for Windows. While even that tiny mention might be exciting to developers starved for Xbox news, it's not particularly surprising that apps built using web technologies could run on any particular modern platform. 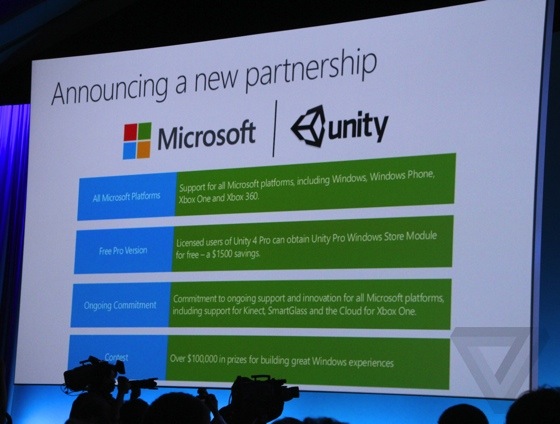 Later, Guggenheimer announced a partnership with Unity, a cross-platform game engine, to support Windows PC, Windows Phone, Xbox One, and Xbox 360. That could definitely be good news. However, it could also be a tacit admission that Microsoft developers will need a cross-platform engine to create games that target both Windows and Xbox, rather than the ability to simply run them on a console. It lends credence to the idea that the Xbox One might only leverage "Windows" to run web applications instead of providing a full computing platform.

Is Windows just a buzzword for Xbox?

At the Xbox One event last month, Microsoft's Marc Whitten said the new console had "three operating systems in one," but we're starting to wonder if "Windows" is more a marketing buzzword than a meaningful inclusion for Windows developers. When the PlayStation 3 launched, Sony's Ken Kutaragi called it a computer, but that didn't make it a particularly useful one. It certainly wasn't useful enough as a computer to keep Sony from removing the ability to install Linux on it with a firmware update in 2010.

It's possible that Microsoft's just not doing a good job of explaining the relationship between Xbox and Windows yet, the same way it didn't do a good job of explaining its policies on used games and always-on connectivity. Microsoft might even be letting Xbox lay low for a while to avoid further fallout before the console's holiday launch. But if there's real value to Windows on Xbox, the company needs to tell developers. Where would it do that, if not its premiere developer's conference?