At 7:27PM PT on Thursday, an L-1011 jet dropped an Orbital Sciences Pegasus XL rocket 39,000 feet in the air. After a brief five-second freefall, the rocket burst to life, heading for the upper reaches of our atmosphere. Ten minutes later, after the three stages of the launch vehicle had burned away, the residual energy propelled the payload — a seven-foot probe — into orbit 328 miles above the earth, where it will idle for the next six months before starting its two-year mission: to explore a little-understood region of our sun, whose vast flows of energy are responsible for both immense fluctuations in temperature and the charged particle-spewing solar wind. 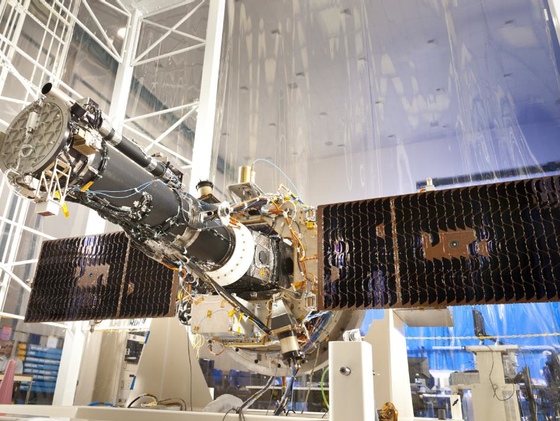 The probe (pictured above) is called the Interface Region Imaging Spectrograph, or IRIS, and it’s going to provide physicists on Earth with high resolution photos and spectral imaging data targeting a narrow layer of the Sun’s atmosphere, called the interface region. The term marks the area between the (comparatively) cool, dense chromosphere and the hot, light upper atmosphere, or corona. The solar interface region is only 3,000 to 6,000 miles thick, but the huge amounts of energy contained in it heat the nearby corona to a million kelvins (1.8 million degrees Farenhheit) — orders of magnitude hotter than the sun’s surface.

The 440-pound, $120 million IRIS probe only contains a single instrument: an ultraviolet telescope combined with an imaging spectrograph, pictured below, a specialized camera built to target specific wavelengths of light. While the camera will only be able to see about one percent of the sun’s surface area at any given time, it will be able to resolve features down to 150 miles wide, capturing the sharpest pictures of the sun that science has ever produced. The probe was originally scheduled for a Wednesday launch, but a California power outage pushed back NASA's plans. 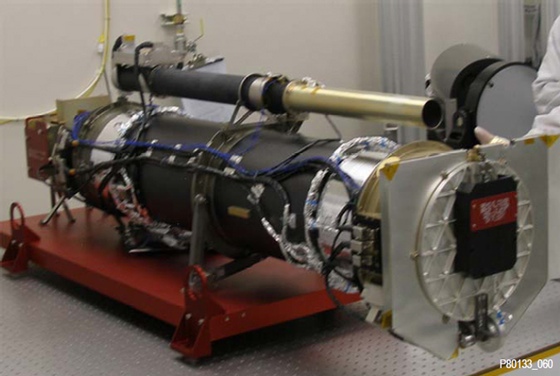 "Imagine giant jets, like the huge fountains you see in Las Vegas."

The purpose of the mission is to explore how and why the sun varies, a profoundly complex question. Part of the answer might be explained by structures in the sun’s atmosphere believed to be only 100 to 150 miles across but 100,000 miles long, according to Lockheed Martin IRIS investigator Alan Title. "Imagine giant jets, like the huge fountains you see in Las Vegas. Except these jets have a footprint the size of Los Angeles, and are long enough and fast enough that they would zoom around Earth in 20 seconds. We have seen hints of these structures, but never with the high resolution or the information about velocity, temperature, and density that IRIS will provide," he explained.

Previously, the lack of interest in studying the interface region had earned it the title of "ignorosphere," said Harvard solar physicist Ed Deluca, speaking to Christian Science Monitor.

Even though the sun’s corona is much hotter than the chromosphere, it’s much less dense, and only a tiny fraction of the chromosphere’s energy is needed to heat it. Until now, the interface region between the two has been difficult to study because complicated interactions between light and matter in the high-energy chromosphere have made the data we have nearly impossible to interpret. Armed with the new computer modeling techniques and vast processing power purposed for the IRIS mission, scientists hope to unlock some of the mysteries surrounding this enigmatic region of the sun's atmosphere.