International Energy Agency says growth in clean electricity is a positive sign, but urges industrialized nations to do more

Electricity generated from renewable energy is expected to grow by 40 percent over the next five years, and may surpass natural gas to become the world's second-largest power source by 2016, according to the latest projections from the International Energy Agency (IEA). In its Medium-Term Renewable Energy Market Report, released Wednesday, the Paris-based IEA said renewables such as wind, solar, and biothermal will comprise a quarter of the world's energy mix by 2018, up from 20 percent in 2011. If the projections hold true, renewables would be second only to coal as the world's leading source of electricity.

The agency attributed much of this growth to an overall decline in costs — particularly for wind and solar technologies — though it urged industrialized nations to continue investing in cleaner sources of energy. According to the report, countries outside of the Organization for Economic Cooperation and Development (OECD) are expected to account for 58 percent of renewable energy generation by 2018, up from 54 percent in 2012. China alone will comprise an estimated 40 percent of the growth in renewable power use over the next five years.

"This is good news, but it should not be an excuse for government complacency."

"As their costs continue to fall, renewable power sources are increasingly standing on their own merits versus new fossil-fuel generation," IEA Executive Director Maria van der Hoeven said in a statement. "This is good news for a global energy system that needs to become cleaner and more diversified, but it should not be an excuse for government complacency, especially among OECD countries." 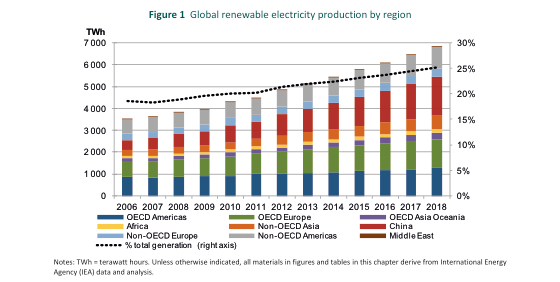 The decline in wind and solar prices has rendered renewables nearly cost-competitive with fossil fuels in some markets, though they continue to face an uphill battle in the US, where cheap coal and shale gas pose stiff competition. The clean energy market has also been hampered by fossil fuel subsidies, which remain approximately six times higher than renewable subsidies, on a global level. President Barack Obama called for the elimination of fossil fuel subsidies in a climate change plan unveiled this week, predicting that such cuts would result in a ten percent reduction in greenhouse gas emissions by 2050.

Uncertainty about the future of renewable subsidies has hindered growth in Europe, as well. In fact, the IEA notes that "despite remaining high, global new investment in renewable energy fell in 2012."