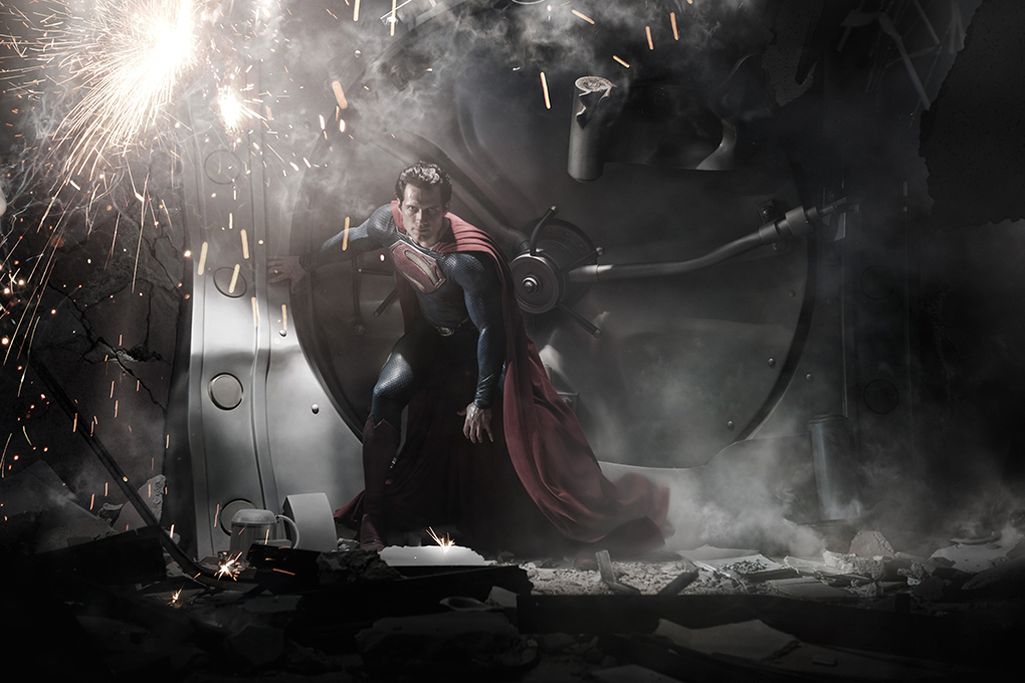 Zack Snyder’s Man of Steel opened to record-breaking box office numbers, thanks in no small part to its arresting visual sequences. One of the individuals behind those scenes is the film’s visual effects supervisor, John “DJ” DesJardin. First drawn to effects work after seeing the likes of 2001: A Space Odyssey and Star Wars, DesJardin has since carved out a distinguished career, with films like Watchmen, Sucker Punch, and the two Matrix sequels to his name. I spoke with him about what it took to reimagine the Kryptonian superhero for a modern audience, starting with Superman’s most iconic action: flying.

Warning: some very mild story spoilers are included below.

"I think a lot of the direction for the flying came from Zack’s style for the movie," DesJardin says. "Where he said to us, ‘I want this to be really cinéma vérité, documentary-style. I think it needs to be handheld. It’s going to be 24 frames, no slow motion. It's going to be anamorphic, so if you look up at the sun there's going to be a big flare going across the screen.’ And once we got into that mindset, a lot of camera-style questions got answered really quickly about how the flying should be done."

Snyder storyboarded the first flying sequence, in which Clark Kent jumps massive distances before coming to grips with his aerial ability. The filmmakers shot footage for the scene, but after it was cut together with the pre-visualized mock-ups ("previz") they realized their approach didn’t quite work. Initially, DesJardin says, the plan was that "We’re gonna be kinda going with him [Superman] into space, and then we’re going to do this slow push-in to his face, and he’s going to be smiling knowingly like he’s got control of his flight power." The result, however — a sequence where the camera magically moved around Superman without much sense of physical reality — didn’t fit with Snyder’s stylistic directive.

"We ended up affectionately calling them the ‘Donner-cam’ shots, after the Richard Donner version of Superman," he says. In the 1978 original, Christopher Reeve was hung on a controllable wire rig in front of a series of projected backgrounds; the camera would then move around the actor to sell the illusion of flight. "But if you look back at that movie, most of the time it looks like you’re flying with him somehow," DesJardin says. While effective at the time, it was the opposite of the documentary-style realism Snyder was aiming for.

The solution was to impose the same limitations a physical camera would bring to the table. "So that particular shot I told you about out in space became, ‘We’re actually on the International Space Station,’ or ‘We have a camera on a satellite, and Superman happens to be coming towards us.’ And we can pan and tilt to try to follow him, but that’s all we can do. It’s just the luck of the draw that he happens to fly by us and we can find him. It’s a searching camera like that."

Fortunately, the team was able to rethink the camera positioning thanks to the large amount of additional data and imagery they captured while filming the live elements. "Whether it’s the character or the environment that we’re shooting in," DesJardin says, "we have ways of capturing that stuff pretty down and dirty. So we can either recreate the location wholesale on a frame, just like switch from the real to the CG because we know we’re going to override the [camera] move, or do something else." Radical changes could require re-shooting Cavill, he says, but "as long as we’re not trying to change his expression too much or anything like that, as long as it’s just about body or speed or flight or camera trajectory, we can change all those things and maintain a performance."

"As long as it’s just about body or speed or flight or camera trajectory, we can change all those things."

That ability to bridge live-action and digital was never more important than in the film’s massive fight sequences. Man of Steel lays waste to vast portions of both Smallville and Metropolis, and DesJardin and his team used an assortment of techniques and tools to adhere to the film’s aesthetic.

"Smallville was a location that was picked out early on — Plano, Illinois — and we knew that we were going to have to try to capture that location the way that we capture our characters to be able to turn them into CG," he says. He worked with Guillaume Rocheron at the effects company MPC to create a system that would allow them to capture a location, and then go back in after the fact and create camera moves once the digital elements had been added to the shot. 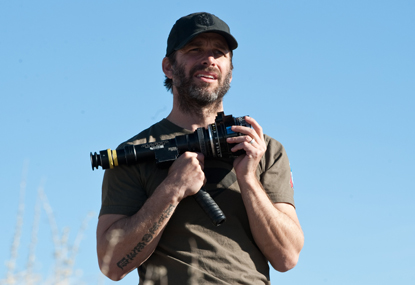 Often camera moves are faked on set, DesJardin explains. "You just go, ‘Okay, this guy just got punched, and now he’s going to go 100 feet that way, so we’re just going to pan off that way.’ And some day nine months from now we’ll put something in there." On Man of Steel they wanted the CG-animated action to drive the camera movement, so DesJardin actually had the film’s camera operator stop rolling when it was time for such a move to occur.

Using something they dubbed the "enviro-cam" — a Nikon camera on a motorized tripod head — they would then capture 72 high-resolution stills spanning all directions at that camera position. The result was a high-resolution "environment sphere" with the same location and lighting conditions as the original footage. The effects artists could then navigate within that sphere with their virtual camera when completing the shot.

"That’s how we kind of did everything with Smallville," he says, "and we were able to add layer upon layer of destruction and fire and things like that. That’s how you get all these complicated handheld moves during that scene." When characters get knocked over after an A-10 strafes the street, "that’s all within the environment sphere of those digital stills … Then we can go up in the sky, and if we have to zoom in, since it’s such a high-res sphere and we have so much information, we can. We can change the focal length and go in really tight, which we do when we’re trying to look up at the planes in the sky after we get done with looking at the street."

Metropolis was a slightly different situation. Chicago subbed in during shooting, and DesJardin and his team surveyed the city with stills, helicopter shots, and environment cameras. "It was just a lot of data mining to get reference and reference [camera] moves that we would copy later. But we knew early on that we would have to build a CG city." Effects house Double Negative helped create the virtual Metropolis from the ground up — and when it came time to shoot the climactic battle between Cavill’s Superman and Michael Shannon’s General Zod, the filmmakers decided to forego location shooting altogether.

"There’s a point where they [locations] are really great and give you a lot, and there’s a point where they’re cost-prohibitive and expensive to shoot in," DesJardin says, explaining that as scenes and fights become more chaotic, it can take as much time to replace the filmed location as it can to create new elements. "Metropolis just became this big animal of destruction. Especially when you get to ground zero with Zod and Supes, it’s like okay, this is green screen now, because there’s no way we’re going to find a location for this." 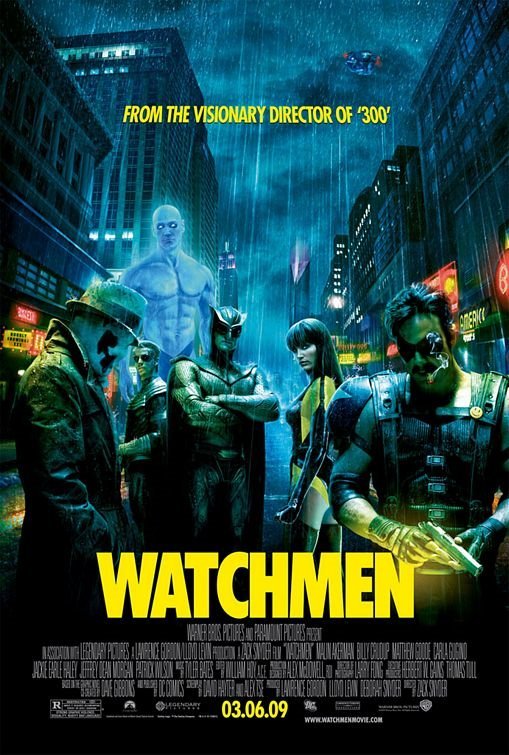 Despite having taken on such iconic characters — and the heightened expectations that come with them — DesJardin takes it all in stride. "I think it’s just kinda cool, actually," he says. "I think in terms of Watchmen, there was a thing — even visual effects-wise — where we really wanted to honor the source material. And Zack directing it really pushed us in that direction, and we all had our copies of the graphic novel, and we were trying to visualize those iconic panels from the graphic novel and get that right."

"Superman, I think, is different," he says. "Yeah there are some iconic things in terms of poses when he flies and things like that, but we wanted to make a really good story about that because there hasn’t been one in a long time." Following the lead of David Goyer and Christopher Nolan’s darker story gave the filmmakers the opportunity to create a more grounded, documentary-style Superman film with its own visual language — adding a new take to the character’s storied legacy.

A sequel to Man of Steel is already being developed, and while DesJardin is currently working on 300: Rise of an Empire it’s clear he has plenty of ideas for a second round with the character. "We were itching to do things in this movie and I think that for the most part we did them," he says. "We wanted to make the flight stuff cool the way that we always wanted to see it as fans, and we wanted Superman to punch and fight and scrap and be mad, and show what the collateral damage is from gods that beat the hell out of each other in a human world. And that was what was fun for us, again, as fans of that kind of material."

"Is there stuff that we were itching to do beyond that? Oh, hell yeah," he laughs. "But we’ll just have to wait and see."