I like the woods. I like the quiet, the green — especially as the summer tunes up and Manhattan starts dripping. And even in New York, the woods are closer than you think. Beacon Mountain is about 60 miles north of the city, only a little over an hour on the Hudson line from Grand Central. That means I can leave my apartment at nine and, even after missing a train or two, be in the woods by noon. I try to make the trek each summer, usually early and usually with enough food to last the whole day. And this time, I brought Google Glass.

Glass is pretty good at banking content for later

I was mostly interested in the camera. My Droid 4, while stellar in most respects, has a pretty crappy camera, and a DSLR would have been too cumbersome. It’s also easier to share photos from Glass these days, thanks to a new raft of apps from Facebook, Twitter, Tumblr, and Evernote. I was hoping I’d be able to tweet pictures straight from the mountain, but once I got there, I realized I was going to be out of service the whole time. Luckily, Glass is pretty good at banking content for later. I could set a picture to share on Twitter, and Glass would tweet it out the moment it found a familiar Wi-Fi network. That sounds obvious, but it's a trick that Twitter for Android is somehow still mastering. I stayed away from most of Glass’s voice commands, relying on the camera button on top of the right arm. (Press once for a photo, or hold down for video.) It’s not as futuristic as the "Okay, Glass" commands, but it felt a lot more natural.

When I wasn't constantly consuming information with Glass, that tiny screen felt much less obtrusive. I spent most of my time looking at the trail instead of the screen, and only dipping into the Glass-eyed stare when I needed to file away a photo. For most of the hike, I forgot I was even wearing it. The screen would idle off and there’d be nothing but clear plastic ahead of me. I’m used to wearing glasses, so the weight felt natural, and luckily my prescription is weak enough that I could still mostly see without them. 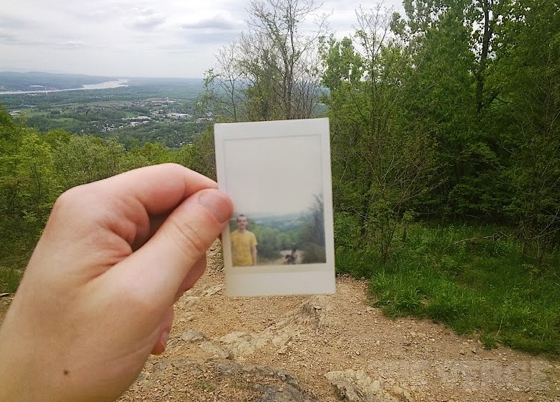 Not every app did exactly what I wanted it to — Evernote had a habit of swallowing photos and weirdly, none of my photos ever made it to my Facebook wall — but the Twitter and Tumblr apps performed perfectly. Even Google+ turned out to be useful. Because most of my friends are on Gmail (and thus Google+), privately sharing a photo ends up working just like an email. They get an alert the next time they check their inbox, and there's a place to talk in the comments section below the pic.

Even when the Evernote app ended up swallowing a picture, there were ways to get it back. Once I got back to Wi-Fi-and-laptop territory, I could see all the pictures and video i'd taken on the Auto Backup feature that Google slipped into the most recent update to Plus, which works like the Glass equivalent of a camera roll app. (If this were Apple, it would have a catchier name.) Every photo I took with Glass went straight to my Auto Backup page, which meant it was easy to share things after the fact.

The hardest part was just taking the photos. Glass’s camera gets good images, but the form factor leads to some unavoidable weirdness. For starters, there's no frame. You can see the image when it's taken, but not before, so it can be hard to suss out the composition in advance. The general rule is that Glass takes pictures of what's directly in front of you, but if you're not used to keeping track of your field of vision, the results can be surprising. Is your head really pointed at that trail, or are your eyes looking slightly to the side? After a few pictures, I got a general sense of where I was pointed, but holding to the rule of thirds was nearly impossible. A few of my photos didn't even have a level horizon. It wasn’t a big enough problem to make me wish I’d brought another camera, but I had to relearn a lot of basic camera skills.

On the other side of the clearing, there was a falcon riding the updrafts — I missed it

Video was easier because I could watch the frame while the camera rolled. It was still a little haphazard, but it feels more direct somehow. Glass also nudges you towards a default length of 10 seconds, just a little bit longer than a Vine. It's a good choice, long enough to feel present without overstaying its welcome. I'm panting in the background of most of the videos — it's a tall mountain, okay? — but the effect is surprisingly inoffensive. Watching the video, it feels like you're there, on the mountain, watching through my eyes. It works.

When I got to the top of the mountain, I took a few photos and then put the Glass back into my pack. I wanted to get my regular glasses back on, and start just looking at things instead of waiting to take a picture. Almost immediately, I regretted it. On the other side of the clearing, there was a falcon riding the updrafts from the southern side of the peak. It was just hovering there, wings spread, just 30 feet above the ground. It would have been a great video, but by the time I dug out Glass it was gone, flown towards a higher part of the ridge, too far away to capture without zooming.

Maybe I'll get it next time.