Side effects may vary: the growing problem of unregulated medical apps

Can the FDA crack down on phony medical apps without killing innovation?

Share All sharing options for: Side effects may vary: the growing problem of unregulated medical apps

In 2009, when Apple’s App Store was just over a year old, an app popped up that seemed too good to be true. AcneApp claimed to treat zits by shining alternating red and blue light out of a user’s iPhone screen, and boasted that it was created by a board-certified dermatologist. The app was greeted with a flurry of mostly positive press coverage. "Anti-Acne App Available for the iPhone" trumpeted The New York Times headline. "iPhone App Claims to Treat Acne With Light," said ABC News. "Acne App Treats Your Zits With Your iPhone," The Huffington Post reported definitively.

As it it turns out, the dream of fighting acne with a pocket computer was indeed too good to be true. Two years after AcneApp was introduced, the US Federal Trade Commission fined AcneApp and a similar rival product, AcnePwner, a collective $15,000, stating that they both made unsubstantiated scientific claims. Both apps were later pulled from app stores.

"If the FDA regulates in a broad brush fashion, that will stifle innovation."

The FTC is the agency in charge of protecting consumer interests when it comes to all types of products across industries, so it can’t focus narrowly on mobile medical apps going forward. Instead, another government agency, the US Food and Drug Administration, is picking up the gauntlet. Late last month, the FDA sent a letter to one company that produces a urine analysis mobile app, ordering it to seek clearance to operate as an official medical device. The FDA has also said it will publish final guidelines later this year, potentially sweeping tons of new apps under its jurisdiction. But some app makers and lawyers are worried that the FDA’s approach could be overkill. "If the FDA regulates in a broad brush fashion, that will stifle innovation," said Matthew Kaminer, general counsel for Epocrates, a company that makes a drug-reference app for doctors, which has more than 1 million active users, and claims to be the most-used of its kind in the US.

Part of this issue is that it remains unclear exactly what type of app should be considered "medical," and which of these should be regulated by the government. Medical apps can be grouped into two broad categories: those designed for patients to use on their own, and apps designed for healthcare professionals, including doctors and nurses, to help them treat patients. But it's tough to tell just by looking at the major app stores which types of apps fall into either of these categories. Indeed, a quick tour of the health section in Apple’s App Store or Google Play turns up thousands of apps promising to treat everything from insomnia to headaches to irritable bowel syndrome.

Then there's the larger problem: distinguishing between apps that offer legitimate medical functions, and those that are little more than digital snake oil. The FDA, for its part, is looking to address a wide swath of apps with purported medical functions. Under draft guidelines for apps released two years ago, the agency defines a mobile medical app as one that "is used as an accessory to a regulated medical device," such as one that connects to a pacemaker. The definition also includes apps that "transform a mobile platform into a regulated medical device," which includes many types of medical app functions, from measuring sleep patterns and heart rate, to treating acne or skin conditions with light.

The FDA says in its draft guidelines it won’t regulate apps that let users keep track of diet or exercise on their own. Still, many app makers of both patient-focused and healthcare-focused apps are unclear as to whether or not their products will qualify as ones that need to be regulated by the FDA. "It still remains uncertain how medical calculators and clinical decision support tools will be regulated by the FDA once the final guidance is released," said Dr. Daniel Schwartz, medical director at QxMD software, which makes a number of apps geared toward health care professionals.

"I don’t really troll the app store for apps."

Doctors are at an advantage when it comes to weeding through medical apps due to their training, but even they tend to stick to apps by companies that make other trusted medical software. "I’m very interested in using technology to make my life easier and my patients’ lives easier, but I don’t really troll the app store for apps," said Dr. Patrick J. Gagnon, a radiation oncologist at the Southcoast Centers for Cancer Care in Fairhaven, MA. "I use things tied to software we already use," including Mobile MIM, an iPhone and iPad app that allows doctors to securely view and interact with a patient’s medical scan imagery.

"There’s so many medical apps to sift through, it’s hard to tell, but my gut sense is that most of them are not that valuable," said Mark Cain, chief technology officer at MIM Software, the company behind Mobile MIM, which also offers a similar app for patients called VueMe. 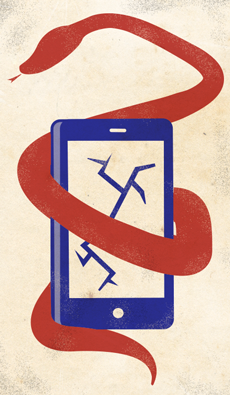 Cain has experience with the FDA's process and the glut of unregulated mobile apps hitting the market. Mobile MIM in 2011 became the first mobile medical app to receive FDA clearance to operate as a medical device. But that process was a rocky one, taking two-and-a-half years of forms and filings, during which time the FDA told MIM to remove its demo app from the App Store. While Mobile MIM was down, Cain said that several competing medical imaging apps appeared in the app store without obtaining FDA clearance. "Because they did not go through the FDA, they were not told to pull their apps," Cain said. "If you bypass the FDA, you can for a period of time bypass regulations and sell your product."

As the FDA finalizes its guidelines specific to mobile medical apps, the agency has been reviewing a few apps using older, more general guidelines for medical software. "It is important to note that FDA has been regulating medical device software for decades and medical device software on mobile platforms for more than 10 years," said Christy Foreman, director of the FDA’s device evaluation office, testifying before Congress in March.

Foreman added that as of this year, the agency had evaluated approximately just 100 medical apps. She also stated that new guidelines are necessary to "provide additional clarity regarding the specific types of apps" that need to be cleared for operations by the agency. The FDA also said it would create a website listing those apps that get clearance, but gave no definite timeline on when that would be launched. In the meantime, the private sector is moving to fill the gap: just last week, a company called HealthTap launched a new feature, AppRx, which it says will allow up to 40,000 physicians in the US to offer recommendations to patients about medically sound apps.

"like an agency regulating calculators because long division exists."

Most people in the fields of healthcare and the app industry who spoke to The Verge recognize there's a problem in sorting through medical apps, but not everyone is convinced that the FDA's approach will help. "The [FDA’s] draft guidance offered little clarity about the very large category of apps that allow users to enter patient-specific information and output a patient-specific result," reads a recent law journal article coauthored by a former FDA lawyer, which also calls upon the FDA to "significantly rewrite the draft guidance." "The US Food and Drug Administration (FDA) regulating and defining mobile medical reference apps is like an agency regulating calculators because long division exists," Kaminer wrote in a scathing blog post.

These critiques all stem from one basic concern: that the FDA, a sprawling agency already bogged down trying to oversee myriad regulations, won’t be able to crack down on fraudulent medical apps effectively, and that its new guidelines will only slow down the process of bringing legitimate medical apps to market. Many app makers think that the FDA should focus on regulating apps specifically marketed to patients, and leave the ones marketed to healthcare professionals out of it, because they have the training to know what is legitimate.

"I think the FDA will take away a lot of the crap that's in the space."

"The FDA will have to find a tack to keep innovation going while keeping rubbish out," said Omri "Bob" Shor, co-founder and CEO of MediSafe Project, an Israeli company that sells a medication reminder app called MediSafe Virtual PillBox in Google's Play store for Android and Apple's App Store. But Shor, along with Mobile MIM's Cain, are among a number of medical app makers who believe that the FDA's basic approach to regulating medical apps is sound, and that regulation of some sort is needed to provide clarity to consumers. "To be frank, I'm looking forward to it," Shor said. "I think the FDA will take away a lot of the crap that's in the space."

Meanwhile, when it comes to the trustworthiness of patient-focused medical apps in general, doctors feel there's still a long way to go. "I have a few patients who use their iPhones to store medical information, they use various apps I’m not familiar with," Dr. Gagnon told The Verge. "You never know if the information a patient brings in on a mobile app is from accurate, real medical records. I would never see a patient and make a decision based solely on the records on their phone ... maybe in 10 years."