The trial to determine whether Apple conspired to fix ebook prices got off to a dramatic start today when Apple's attorneys raised questions about whether the company can receive a fair trial from a judge who they say appears to have already made up her mind about the case.

After hearing evidence presented by both sides for nearly a year, US District Judge Denise Cote offered her opinion during a pretrial hearing last week about the case — although she cautioned that it was a "tentative" view.

"I believe that the government will be able to show at trial direct evidence that Apple knowingly participated in and facilitated a conspiracy to raise prices of ebooks," Cote said last Thursday, "and that the circumstantial evidence in this case, including the terms of the agreements, will confirm that."

"All we want is a fair trial."

Early in his opening arguments, Orin Snyder, an Apple lawyer, brought up the comments gently. He said the judge's "tentative view" wasn't "great for [his] client" and he asked Cote to forget any prior opinions she might have formed so that Apple receives justice. He prepared to move on when Cote stopped him and — just as gently — tried to reassure him that Apple will be treated fairly. She noted that her policy of reviewing the evidence during the pretrial phase was designed to speed up the case, a strategy that Apple agreed to. She told Snyder that she had only seen some of the evidence and would reserve judgment until she heard it all. She said that "this isn't a vote about whether I like Apple ... the deck isn't stacked against Apple unless the evidence stacks against Apple."

Snyder told Cote that Apple was grateful and "all we want is a fair trial."

The exchange followed opening arguments made by lawyers from the US Department of Justice. After the DOJ laid out scores of emails and outlined testimony from some of Apple's alleged co-conspirators, it's hard to fault the judge for having doubts about Apple's case.

According to the DOJ, the publishers and Apple set out in late 2009 to weaken Amazon's ability to compete on price and reduce its market share, which at the time was over 90 percent. The defendant publishers feared Amazon would one day possess enough market power to dictate pricing terms to them. Apple was interested in setting the table for the iPad and iBookstore, which would make their public debut in January 2010. The government alleges that Apple CEO Steve Jobs wanted to strip Amazon of the ability to discount ebook prices while ensuring that Apple would make a sales commission of 30 percent.

The trial is expected to last three weeks. Top executives from Amazon and Apple are expected to testify, including Eddy Cue, Apple's iTunes chief and the man the government accuses of herding the publishers into the agency model. Cue is due to take the stand on June 13. The case promises to provide many more revelations about how these internet superpowers tussled for control of the nascent US ebook market, which now generates $3 billion in sales annually. 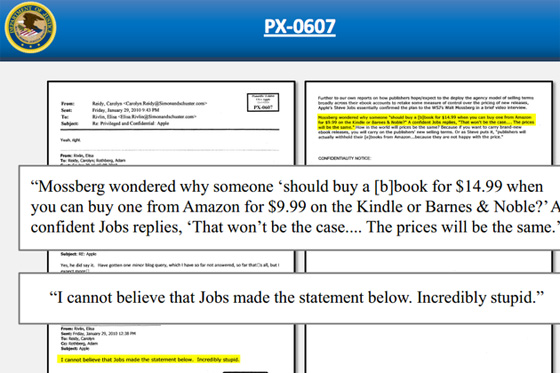 One of the exhibits the DOJ presented in court today.

Apple allegedly encouraged the five publishers to drop the century-old business practice of allowing retailers to price books, for one that handed all the pricing power to the publishers. Under the alleged scheme, retailers would become agents of the publishers and earn a commission on sales.

But the government says it was no coincidence the five publishers simultaneously decided to drop their former business model after 100 years. DOJ attorneys showed scores of emails and quoted from witness testimony to try and illustrate how Apple helped the publishers share confidential pricing information with each other so they could act in unison. Each needed reassurance from Apple that they wouldn't be acting alone, the DOJ says. According to documents filed with the court, Penguin CEO David Shanks acknowledged that Apple was the publishers' "facilitator and go-between."

The DOJ cited a statement Jobs made shortly after unveiling the iPad, in which he knew Apple's ebook prices, $12.99 and $14.99, would not be higher than Amazon's. When reporters noted that Amazon sold many ebooks for $9.99, Jobs said the prices would be the same. In an email exchange between two executives from Simon & Schuster, one of the execs wrote: "I can't believe Jobs made the statement ... Incredibly stupid." The government suggested that the execs were critical because Jobs was exposing their conspiracy.

Snyder told the court the government has twisted facts to paint a sinister picture of Apple. First, the DOJ hasn't offered any direct evidence that Apple conspired, something that antitrust law requires. He noted that the threshold for finding liability is high and requires nothing short of a confession, which the government is far from possessing in this case. On the contrary, Apple denies the government's contention that it was coordinating a price-fixing scheme. He said Apple executives would testify they had no idea that the publishers were discussing pricing policies among themselves. 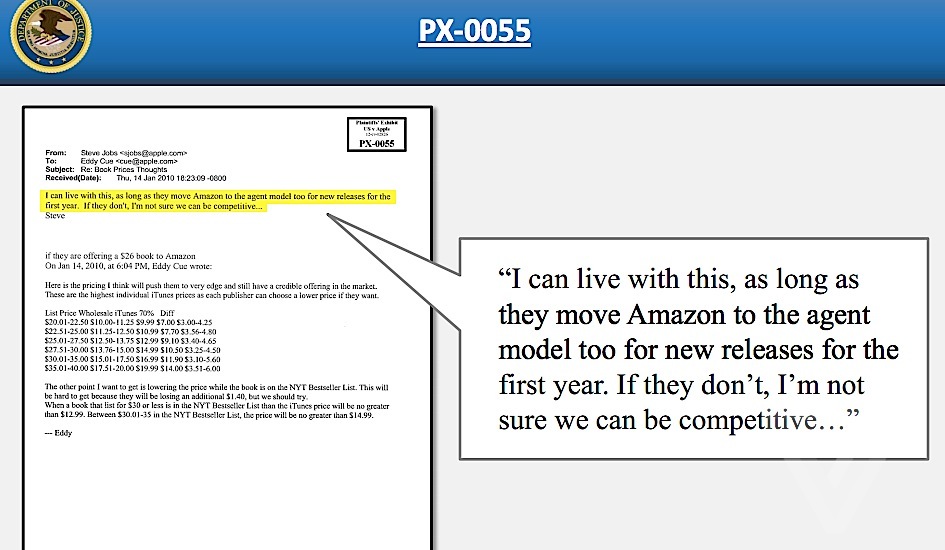 An email from Steve Jobs to Apple exec Eddy Cue, which the government says is proof that Apple wanted publishers to force Amazon to adopt agency model.

He ridiculed the government's assertion that the Most Favored Nation (MFN) clause within Apple's agreements with the publishers — a stipulation that guaranteed Apple would be given access to the lowest ebook prices offered by any other retailer — was anticompetitive. The DOJ has said that the MFN was intended to push the publishers into forcing Amazon to adopt the agency model and cease discounting ebooks. They wouldn't want to make less money from Apple. Snyder said, however, that the MFN was proof of Apple's innocence. "If the fix was in with the publishers," the attorney told the court, "why would Apple need an MFN?"

Snyder argued that the government was trying to rewrite antitrust law. He claimed that no case in history has imposed liability on a company in Apple's position: a newcomer to a sector, facing a dominate player (Amazon), ushering in a period of falling prices. Apple maintains that prices fell as a result of the agency agreements. As for the government's allegations that Apple encouraged the publishers to pressure Amazon to adopt the agency model, Snyder said he will show that Amazon was considering such a move well before Apple entered the market.

The trial is expected to last three weeks

Whatever the trial's outcome, Apple has little to gain and lots to lose. All five publishers accused of participating in the conspiracy over the past year settled with the DOJ. Those settlements require the publishers to free retailers from the agency agreements, which means merchants can again offer discounts on ebooks, and Apple no longer has any price protection. On the other hand, if Apple is found liable, numerous state attorneys general will require the company to pay damages. Representatives from Connecticut, Colorado, and Ohio were in court today. An unfavorable decision could also lay the foundation for class-action suits.

The full presentation of the government's case against Apple can be found on the Department of Justice's website.