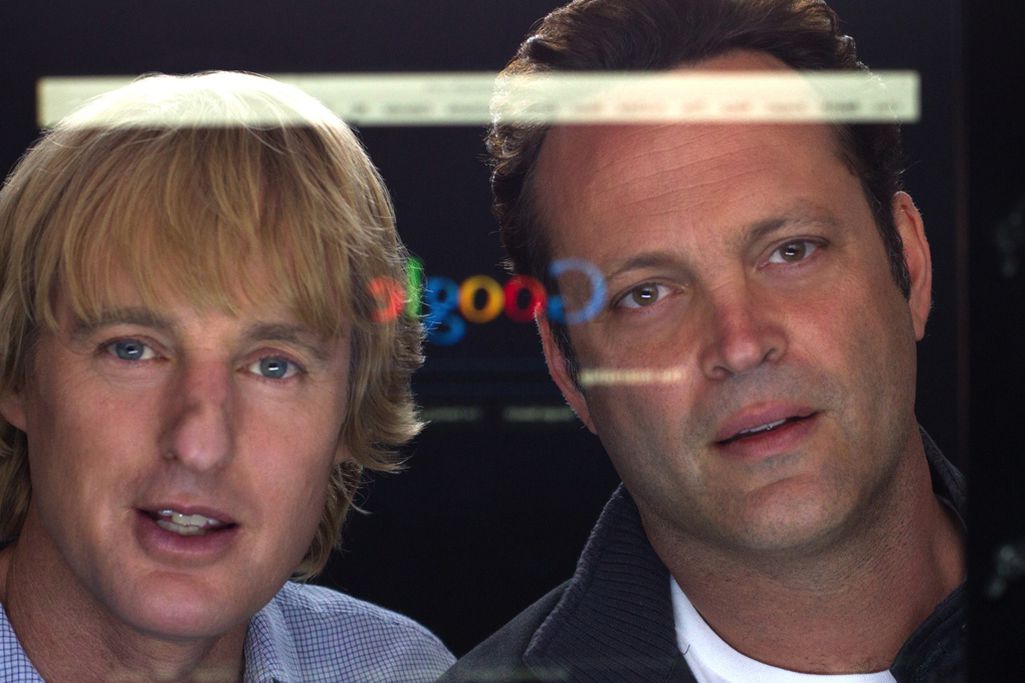 Not since The Wizard has a movie been so in the bag for a corporation. It’s incredibly difficult to watch The Internship as simply a movie and not as a two-hour long recruitment ad designed to congeal the vaguely warm feelings most people harbor for the company into a wet pap of "Googly" propaganda. You can watch The Internship as the classic buddy comedy it tries to be — but you shouldn't.

For every great moment, there are several more that fall flat 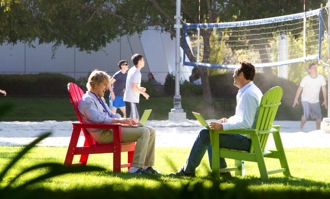 The movie opens on best friends Billy and Nick, played by Vaughn and Wilson respectively, gearing themselves up for a sales pitch. It's not to be, however, because nobody buys watches and their snappy-patter people skills just don't seem relevant anymore. The watches they're trying to sell are (heavy-handedly) called the "Chrono Shock" and their favorite drink is Pappy Van Winkle bourbon. Get it? They're old.

After a brief stint in a mattress shop (with an excellent, uncredited cameo by Will Ferrell), we get to the heart of the movie. The two talk their way into an unlikely internship at Google so they can start their lives anew, having been chosen because their “life experience” makes them a kind of “diversity hire.” Off to Google we go, where we meet Dr. Chetty, the taskmaster for the various challenges the interns face. He's played by The Daily Show’s Aasif Mandvi, who gleefully chews through his lines with a bright-eyed relish that the headlining stars really could have learned from.

In a departure from how things actually work at Google, the interns are split into teams to compete with each other for a chance at a guaranteed full-time job — and, as you'd expect, our heroes are the last to get picked. They struggle to keep up with the young’uns, but of course will have wisdom to impart before the end. The movie works through your standard Bad News Bears “losers learning to become a team” schtick, with challenges ranging from finding bugs to tech support to a Quidditch match. It's all very formulaic, but it's the kind of formula that can still work in the hands of a deft director and charismatic actors — but sadly both are in surprisingly short supply here. 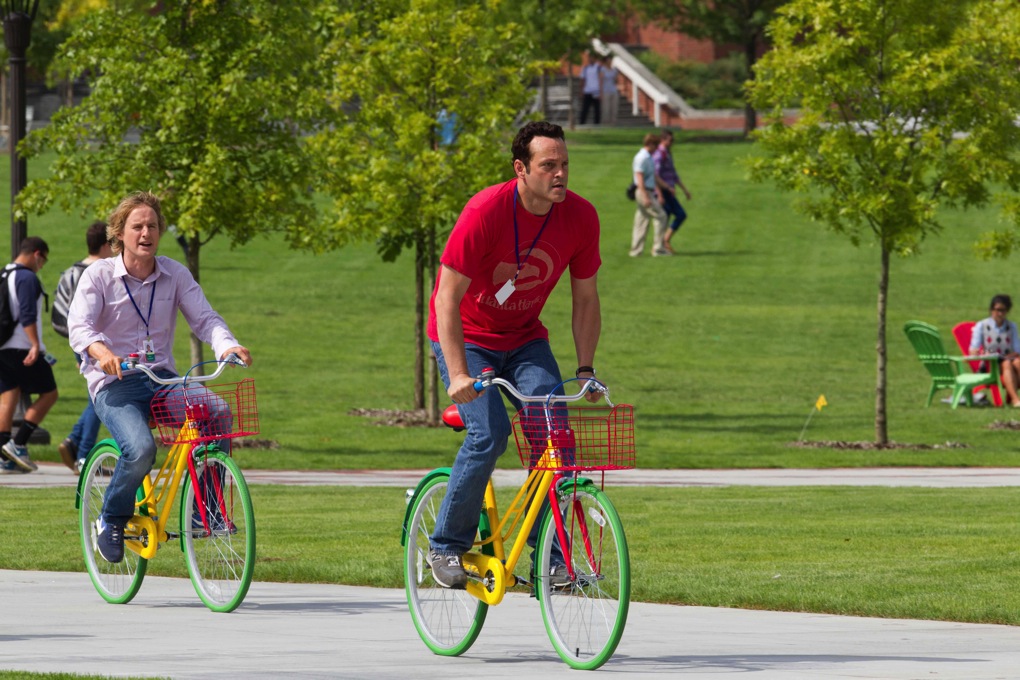 Though Vaughn and Wilson do maintain much of the chemistry they showed us in Wedding Crashers, the movie itself doesn't really earn the friendship it's trying to present — the emotional stakes never really rise to the point where you feel engaged. I lost track of the number of motivational pep talk speeches in the film while simultaneously knowing exactly when it was trying to wow me with ad-libbed banter. For every great moment, like Vaughn unwittingly pitching an app that’s exactly like Instagram, there are several more that fall flat — the worst of which was Wilson's wildly inappropriate use of a line or two from Langston Hughes' "A Dream Deferred."

To the movie's credit, it does a passably good job of depicting a realistic breadth of geek archetypes in 2013: your overachieving homeschooler, your cosplayer, your Ivy-league British asshole, and (refreshingly) a female engineer who isn't overwhelmed by a stereotypical work / life conflict. Those who were unfortunate enough to see Josh Gad's Steve Wozniak in Jobs will be pleased to know he makes a nice turn in The Internship as a nerd savant.

The Internship's most affecting moment is a surprising one: the kids become humanized and relatable when they reveal that they, like Nick and Billy, are worried they won’t have jobs either. The old guys might be adrift, but even the most elite of college students don't have a guaranteed spot in the new economy: "The whole American Dream thing that you guys grew on up, that's all it is nowadays: a dream."

But while The Internship plays around the edges of these thorny economic issues, at its heart it's aiming to be a feel-good comedy, not social commentary. That tension leads to a surreal climax — with one character exclaiming "I have a job! I. Have. A. Job!" amidst the cheers of the jobless interns he just defeated. The greatest triumph in the world of The Internship is simply being employed — by Google. 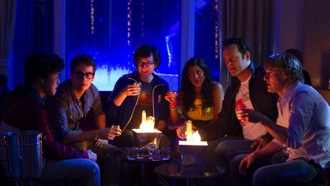 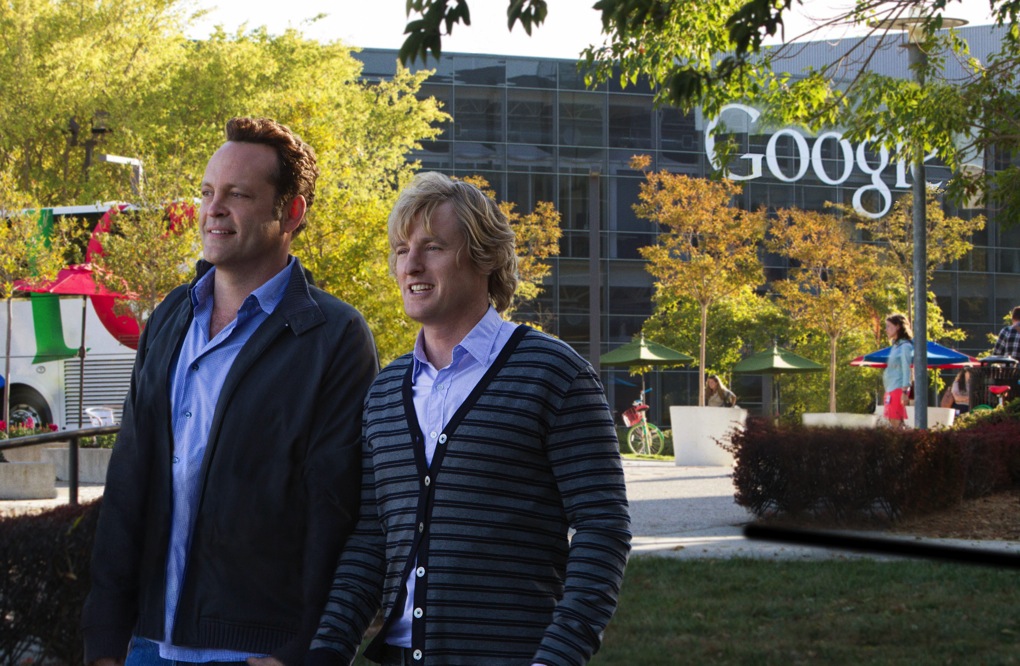 Ostensibly, The Internship uses Google and its products in the same way that The Mighty Ducks uses hockey — as a vehicle to create a world and a way to drive the plot forward. But unlike even the most earnest sports movie, nobody ever questions the value of Google and multiple references are made to the idea that the company is really just there to make the world a better place. Google Hangouts! Translate! Chrome! Nearly everything gets name-checked here, and the camera lovingly pans over Google's main Mountain View campus and its ubiquitous, brightly colored bicycles every few minutes. "Picture the greatest amusement park you've ever been to as a kid," Nick says, "Now imagine nothing like it and a million times better."

In The Internship, a person's highest calling is to help a down-on-his-luck local business owner decide that Google AdWords can give him and his family a better life. All of the traditional morals of teamwork and intelligence and gumption are literally — and I mean that a character literally says this — summed up as "Googliness."

Larry Page has an island he'd like you to visit

The biggest product placement is Google itself, and it's so pervasive that the mere act of suspending your disbelief like you normally would to watch any movie is dangerous. It means that you have to accept Google's worldview just to make sense of the plot and the characters.

The final credits roll not as a standard scroll of text but as literal Gmail, Google Docs, and Google+ web pages with the actors' names and faces inserted into each product. If you can keep your wits about you, you'll be picking up your jaw from the sticky theater floor as you marvel at the sheer audacity of it all. If you can't, Larry Page has an island he'd like you to visit.