Kindle Worlds tries to crack a huge market, but it could lose the most interesting elements of fan writing

In 2007, former Yahoo executive Chris Williams decided it was time to make money off fan fiction. "I work for a brand-new fan fiction website called FanLib.com and my colleagues and I want it to be the ultimate place for talented writers like you," read an email sent to hundreds of authors. "Together, we can create the greatest fan fiction site the web's ever seen!" In partnership with publishers and show producers, FanLib launched sweepstakes and contests for fans, letting winners contribute to scripts for series like The L Word.

But the response from fans was instant and furious. Some mocked the site's tone-deaf design, and others worried that it profited off authors without giving them any legal protection. "The people behind FanLib ... don't actually care about fanfic, the fanfic community, or anything except making money off content created entirely by other people and getting media attention," wrote fan fiction author Astolat. "They're creating a lawsuit-bait site while being bad potential defendants." After barely over a year, FanLib's infrastructure was bought by Disney, and the fan fiction archive was quietly shut down.

"What Amazon is trying to do is commodify a community."

Six years later, media powerhouse Amazon is giving the idea another try. In May, Amazon announced Kindle Worlds, a fan fiction wing of its publishing program. In exchange for work written for three Warner Bros. shows, authors will receive between 20 and 35 percent of the revenue from each sale. Rather than existing in legal limbo, stories will be officially sanctioned by copyright holders. And it's one of the only ways for fan fiction authors to easily sell their work. But to some authors, Kindle Worlds is still a step backwards — an effort to monetize fan fiction while stripping out its best features.

"What Amazon is trying to do is commodify a community," says Nistasha Perez, who handles communications at the Organization for Transformative Works. Among other things, the organization runs a massive nonprofit fan fiction site called Archive of our Own, created by Astolat and others in direct response to FanLib. AO3, as it's called, has become one of fan fiction's central hubs, along with LiveJournal, Wattpad, Tumblr, and Fanfiction.net. It's designed for and by fans, supporting itself with periodic fundraising drives.

The problem, as Perez and others see it, is that Amazon's publishing program simply misunderstands what fandom is about. To them, the often collaborative process of fan fiction can't be shoehorned into a single ebook file. "I'm going to write this story for my friend because she's having a bad day, and then somebody is going to decide to draw fanart for me, or leave a two-page paragraph about how much they enjoyed it," says Perez. But Amazon's terms of service give it exclusive rights to stories and a license to use new elements in them — like original characters or specific settings. That likely means stories can't be posted elsewhere or built upon by other non-Kindle Worlds fans.

Ironically, this could make people less likely to buy Kindle Worlds' product. As it stands, Amazon is in competition with a vast array of free options, including well-curated selections by individual fans. A typical fan fiction story might start on Livejournal in response to a prompt, then get cross-posted to Fanfiction.net, Archive of our Own, and a dedicated fan site. Kindle Worlds authors can sell their work, but they can't tap into the same wide network of collaboration and support

Amazon is in competition with a vast array of free options

Though Kindle Worlds could get more licenses in the future, it currently only allows fan fiction from three properties, and only one — The Vampire Diaries — is particularly active. Inside Vampire Diaries fandom, there's tentative consideration of Amazon's offer. "It's been an ongoing discussion," says Vampire Diaries fan That_Treason, a software engineer who started writing fan fiction about a year ago as practice for original fiction. "There are definitely some of my friends who are interested in being a guinea pig for the rest of us, and seeing if it's actually a useful tool."

But she's less sure that she would actually buy an ebook from Amazon. "The way I would be most willing to pay for something is if it were something I had already read," says That_Treason. "If I had read it through all the way and thought ‘Wow, that was really amazing — I would want to support that author,' then I might want to buy a copy and read it on my Kindle." Without a good way to vet stories, Kindle Worlds has less to offer than its free competitors. "Whether I'd be willing to pay for something without knowing the author... I don't know." The fan fiction gift economy doesn't just mean collaboration — it also means that people would rather support someone who's built up a reputation for good work.

A Kindle Worlds ebook might not make much money, but it could pull fan fiction out of fuzzy legal territory

That_Treason acknowledges that the money from Kindle Worlds would probably be negligible, but she says there's another reason she'd want to try it out: not having to worry about her story falling into a legal gray area. The Organization for Transformative Works insists that fan fiction is fair use, but the legal precedent is far from clear. Unfortunately, this means Amazon's offer could be a double-edged sword. "The fandom that I write in has been relatively tolerant on this thing," says That_Treason. "But now that they have an official license, will they start to crack down on Fanfiction.net or on AO3? These are questions I'm concerned about for my own writing, even if I don't go to Amazon."

Amazon's actual terms of service could pose a more immediate problem. As science fiction author John Scalzi pointed out soon after the announcement, publishers can use fans' original story elements without further pay, which has alienated some people. There are also ongoing questions about where publishers will draw the line for what to accept. General guidelines forbid graphic sex or "offensive" content like excessive violence or profanity. But a longer set of rules will apply to each fandom, and nobody knows yet what it will include. Both Amazon and Warner Bros. declined to answer questions about the guidelines. 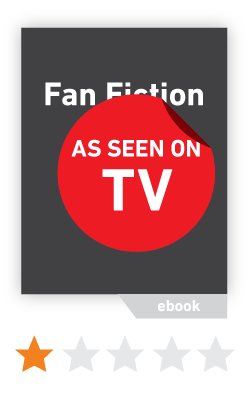 Fandom thrives on flipping morality systems, reinterpreting relationships, and changing tones — probing the dark implications of a lighthearted video game or putting dramatic characters in ridiculous situations to imagine how they'd react. It's a way to create new stories that critique the old ones, or simply to explore the things that aren't shown in the source material. Much-mocked genres like slash fiction create new ways to explore relationships and alternate character interpretations give us stories from the villains' point of view. Depending on what Warner Bros. is comfortable with, authorized fan fiction may be stripped of much of its power. And because of licensing issues, writers can't submit "crossover" fiction, which combines characters or settings from multiple works.

Kindle Worlds gives fan fiction authors something they'd probably never get anywhere else: a sense of legitimacy and a bit of money. Scalzi also notes that there's already a version of paid and licensed "fan fiction" if you count tie-ins — depending on your interpretation, Amazon is either democratizing or undercutting the tie-in novel market. Unlike FanLib, fan fiction writers are getting more than a contest prize; they're being treated as real authors and given real legal protection.