Microsoft has been detailing additional Windows 8.1 improvements this week at its annual Tech-Ed conference. One particular feature, native fingerprint reader support, is designed to improve Windows' notoriously mixed support for biometrics devices. Whereas previous versions of Windows have supported fingerprint readers through third-party drivers and software, Microsoft will improve its native support of them in Windows 8.1 and include options to lock down individual folders to fingers. 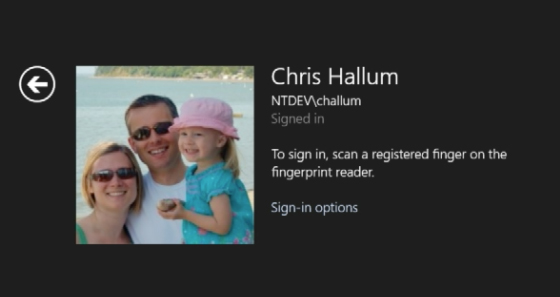 Swiping or touching a finger on a reader will allow Windows 8.1 to authenticate a finger against a Microsoft Account. Users will also be able to purchase applications using a fingerprint reader or login to apps. Michael Niehaus, a senior product marketing manager at Microsoft, says the company is "working very closely" with two to three manufacturers to build the support in. Perhaps the most interesting change is the folder support for fingerprints. "We're also working with this so that you can actually take folders and say this folder requires fingerprint access to get into, so different levels that we're looking at," explained Niehaus during a Tech-Ed session on Monday.

Microsoft is also working with various OEMs to encourage them to add fingerprint readers into laptops, tablets, keyboards, and mice. "You'll begin to see these be more pervasively available just to make it that much easier to log in to Windows," says Microsoft's Stephen Rose.

Update: unfortunately the fingerprint restrictions for folders will not be coming to Windows 8.1. "There was an inaccuracy stated during the Windows in the Enterprise TechEd session around fingerprint-based biometrics in Windows 8.1. To clarify, you will not be able to restrict folders or files with fingerprint access as stated in the session," says a Microsoft spokesperson.