The VAIO Duo 11, Sony's sliding, laptop / tablet hybrid didn't exactly take the market by storm – its price was too high, its keyboard cramped, its trackpad non-existent, and its battery life too short to really be a compelling product. Despite all that, Sony thinks the form-factor works, and the company's new Duo 13 promises to fix what ailed the previous device.

The simplest solution to the Duo 11's cramped feel was to simply make the device bigger, and that's what Sony did. The Duo 13 is much roomier and more comfortable than the Duo 11, though it's not actually that much larger — it weighs less than three pounds and is only 0.77 inches thick, despite the larger 13.3 screen. That screen is 1080p, and looks great — it's just like the display on the VAIO Pro 13, with great viewing angles, colors, and incredibly crisp and clear text. Unlike the Pro 13 (and its smaller cousin, the 11), though, the Duo 13 doesn't feel flimsy or breakable — it's sturdy and rigid, though it's hard not to worry about a device that "closes" with the screen facing outward.

As with any convertible device worth its salt, the Duo 13 has two distinct modes: laptop and tablet. Sony's "Surf Slider" transitions the device between the two — it's a surprisingly sturdy hinge that floats the screen over the keyboard tray before laying it down on top or propping it up behind. (Try as I might, I couldn't get it to stick in the middle.) Both modes have been upgraded, mostly to solid effect: the keyboard is much bigger and more comfortable, and Sony even found a place to put a trackpad. A tiny trackpad, and one that you'll only want to use when absolutely necessary, but a trackpad nonetheless. The touchscreen works well, and the Surf Slider keeps the screen set comfortably at finger-prodding distance — being able to keep my hands in place above the keyboard and still reach out and tap on the screen made using the touchscreen much more palatable, though it's still far from a complete solution. 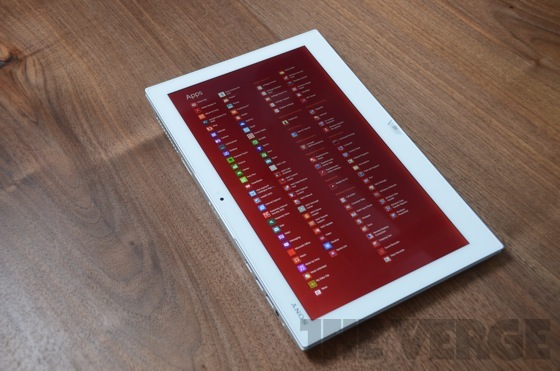 More attention has been paid to how you might use the Duo 13 as a tablet, either held in your hands on rested on a table, angled slightly as its design dictates. The device comes with a pressure-sensitive stylus, which clips onto the device via a magnet. When you use the stylus, the touch recognition on the Duo shuts off, so you can draw without brushing the screen and messing anything up. The stylus works impressively well, with almost no lag and impressive pressure sensitivity — it's every bit as good as the Surface Pro's pen input. Sony includes a suite of creative apps, like Art Rage Studio and VAIO Movie Creator, which combine to make the VAIO Duo a solid tool for artists.

It's as much a canvas as a laptop

Internally, the VAIO Duo's spec sheet looks like the VAIO Pro 11, with a new 1.6GHz Core i5 Haswell processor, 4GB of RAM, integrated graphics, and 128GB of solid-state storage. It comes with a 6,320mAh battery that's nearly 50 percent larger than the VAIO Pro models, which should be a very good sign — we haven't had a chance to test the battery yet, but the PROs wowed us with their longevity and the Duo seems well-equipped to do the same.

At $1,399, available June 9th in Carbon Black and Carbon White, the Duo's price remains an obstacle. But Sony has otherwise addressed nearly every one of our problems with the Duo 11, potentially leaving only the big question: is the slider convertible the right form factor? We're digging into the Duo even further to find out — stay tuned.